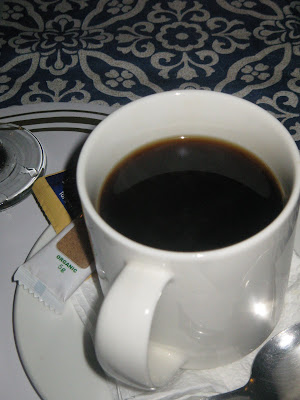 I loved the city of General Santos, a former B'Laan tribal settlement named Dadiangas which refers to the endemic trees proliferating in the area. It was renamed General Santos after the commanding general of the Philippine Army who led the resettlement of migrants from Luzon in 1939.

It is a highly urbanized city, with interesting hotels and restaurants, but without all the wretchedness. The exceptional roads are wide and circumspectfully laid out, houses and buildings don't crowd one another, trees and plants grow lush and abundant. No high buildings tower over you - only volcanoes mar a view of the horizon. It is not sparsely populated nor settled, but everywhere there's an ample sense of space - the kind of deeply breathable space achieved when something was consciously built to blend with nature.

On my last day in Southern Mindanao I was taken to Sarangani Highlands at sunset, for an astounding view of Sarangani Bay and a cup of the local coffee.

Sarangani Highlands used to be the private retreat of two doctors who nurtured a garden there. They were prevailed upon to open the area so the public can partake of the unrivaled view, and marvel at their gardening prowess.

The property embodies the planning of General Santos City - the landscaping is not painfully deliberate, but rather reflects the charming haphazardness of unprofessional skill. Against the backdrop of the mountains were lush woody bushes and large potted bonsai, while flowering ornamentals provide a riot of color and scent. With the tropical lushness, the cool, soothing air of the mountains fanned by the breeze blowing in from the sea, it is a haven between the earth and the sky.

We ordered what was jokingly referred to by my colleagues as "cat coffee" - civet cat coffee, or alamid in the native tongue, and known in other Asian countries as kopi luwak. It is coffee brewed from beans excreted by civets (musang), the most expensive kind of coffee today.

Civets are native to Southeast Asia and prefer tropical rainforests. The alamid coffee plantations in Southern Mindanao are cultivated on Mt. Matutum, but I heard there are now civet farms where the animals are regularly fed coffee cherries.

I am not a coffee connoiseur, as I don't normally drink coffee, but I liked alamid. The cup I had was full-bodied but mild, not fruity, and had a not unpleasant metallic aftertaste. 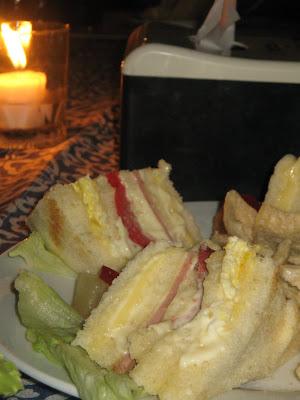 We were to have dinner someplace else, so we ordered lightly and only to have something to pick on while enjoying the vibe and the view. 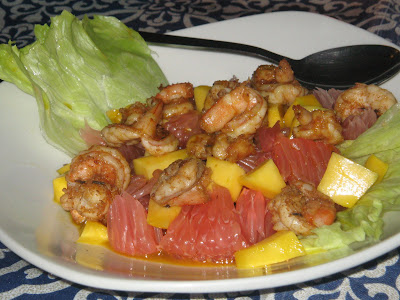 The clubhouse was okay, but this salad was memorable. The combination of crunchy, mildly sweet pomelos, sour-sweet mangoes and fully seasoned seared shrimps, all rounded-up by a distinctively Asian-flavored dressing, was as breathtaking as the view of the Sarangani Bay. If the other items on the menu were as good as this, then Sarangani Highlands is one consummate, complete destination. Truly like General Santos itself.

It looks like an interesting take on the classic Thai pomelo salad. I first had a taste of it in Bangkok, prepared by a professor who hosted the tour group of the Philippine Horticulture Society and the Philippine Orchid Society.
Masarap talaga.

Yes, it was reminiscent of a Thai salad, though this one was very simple and very mildly spiced.