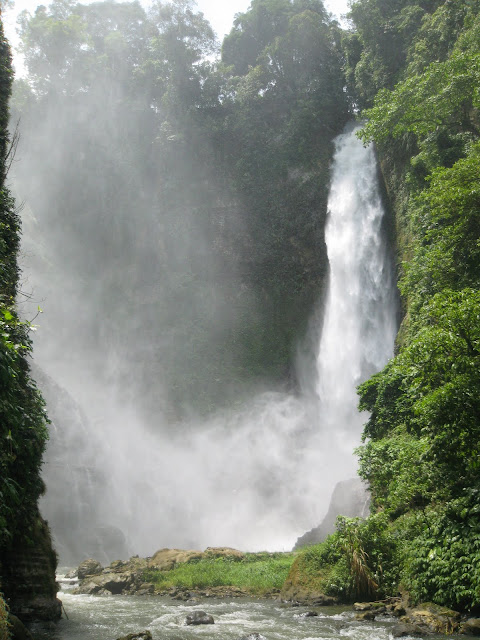 Last week the municipality of Lake Sebu in South Cotabato celebrated Helubong, its foundation anniversary. It's a fairly new town, having been ceded from the town of Surallah only in 1989.

And I remembered the enchanted time I spent there. For the longest time I had been aching to go there, having been fascinated since the late nineties by the tales of a trainor-consultant. He said the lake sits on top of a mountain, and to go there you have to maneuver over unpaved, sodden, almost vertically winding roads on a habal-habal, which is the local term for a motocycle, on the rear end of which is placed perpendicularly a wooden narrow plank.

The plank is for passengers, who sit on the opposite ends, and must precariously balance both sides while the motorcycle driver manages the uphill drive. There was no other means of transportation, and it tickled my mind no end wanting to experience it.

It took me more than a decade to visit Lake Sebu. By this time the roads had been paved, though still breathlessly winding, and narrow at places. Commercial transportation is still haphazard, but I didn't get to ride my habal-habal. I was there for work, so I was provided a vehicle - an SUV no less.

But I'd like to think the delay, and the disappointment, were for a reason. Because if I had gone earlier, I wouldn't have experienced a more enthralling time there. But since I went there recently, there were now tourist infrasctuctures. I got to ride a zipline that zoomed over what's said to be the deepest gorge in the country, and disembarked to the thundering roar of one of the loveliest, and highest, and the most forceful, waterfalls I've ever seen, so far.

The view of the waterfalls alone, heretofore inaccessible, was more than enough thrill to make up for my imagined habal-habal ride. 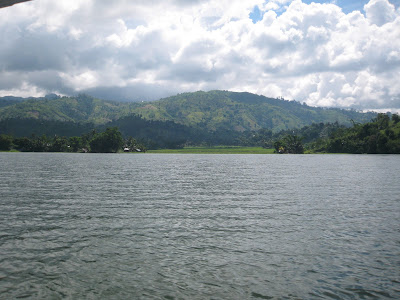 Lake Sebu is one serene, magical place. It is the home of the T'boli tribe, one of many ancestral domains in Mindanao. Sebu in the T'boli language is lake, so the name is actually redundant, like Laguna Lake.

The lake is fed by a spring, and what a copious spring it is. The lake feeds all of seven waterfalls in varying sizes, including Waterfalls No. 2, the biggest (topmost photo), by force of gravity.

The T'bolis' main source of income is the culture of tilapia. Fishpen upon fishpen adorn the tranquil lake, and the restaurants that have sprouted around it specialize in tilapia recipes to kingdom come. The tilapia farms, though, has rendered the waterfalls fit only for viewing. Even from afar, the mist from the falls smelled of fish. 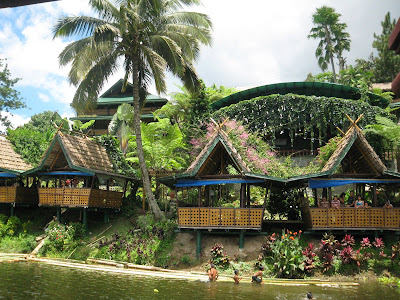 My colleagues in Koronadal City took us to La Punta Isla, their favorite restaurant and resort in Lake Sebu. Like other restaurants in the area, it has several huts by the water edge. There is also a dining area atop with a calming view of a large part of the lake and its fishpens. 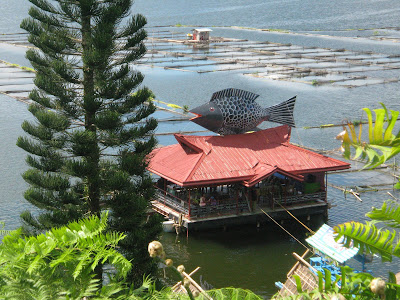 We opted to dine in the big pavilion on the water, which is reached by riding a boat and pulling at the rope attached to the hall. From there we could look out into the middle of the lake, as well as look back to the kitchens up top, watching baskets of smoking hot food ziplining downwards for the customers in the huts and in the pavilion. 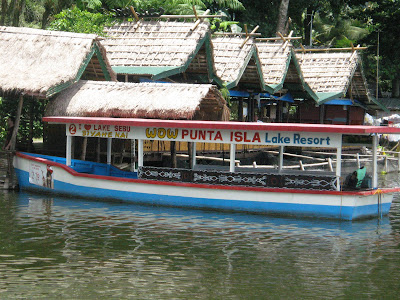 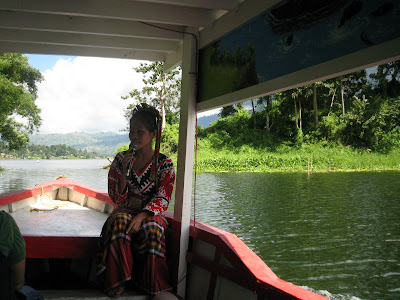 A tour around Lake Sebu was arranged by the restaurant with a T'boli guide, who fluently chattered in English for the almost one-hour boat trip, adorned in full tribal finery. Trivia: T'boli women's dowry take the form of horses, which are apparently valued for transport down the mountain. Our guide proudly informed us that her dowry was seven horses.

A trio of other tribe members also regaled us with ethnic songs and dances during lunch. 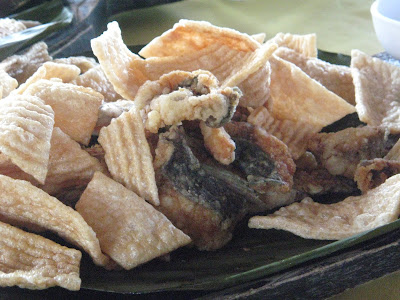 Lunch consisted of tilapia, of course. There was chicharon tilapia, which was deep fried morsels of fish served with kropek. The tilapia was fried well and wasn't greasy. 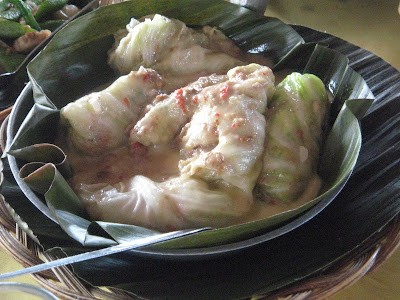 Then there was sinangay na tilapia, Punta Isla's version of tinomok, rolls of cabbage with minced tilapia filling in coconut cream. 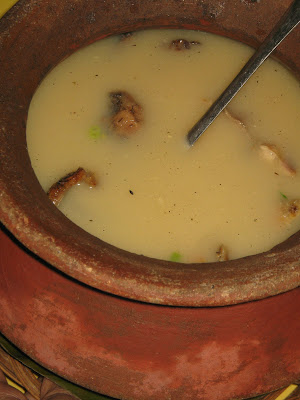 My favorite, though, was the nilagpang, served in an unblemished banga. I think this soup is unique to South Cotabato, for we would encounter it in other restaurants in the lowlands, as well. 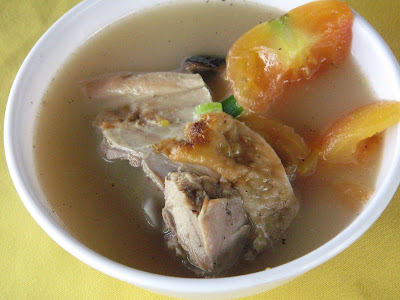 It is free-range chicken grilled prior to being boiled in a broth, then flavored with some sliced tomatoes and scallions. Very simple and straightforward, but very flavorful and comforting. 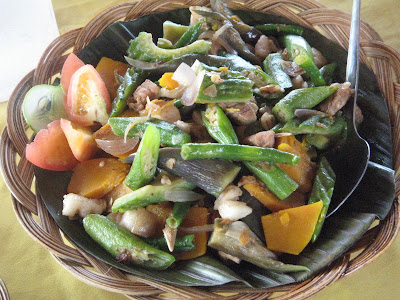 I was surprised to find pakbet so far removed from Northern Luzon, but this was the "Tagalog" version, without bagoong isda and with squash. 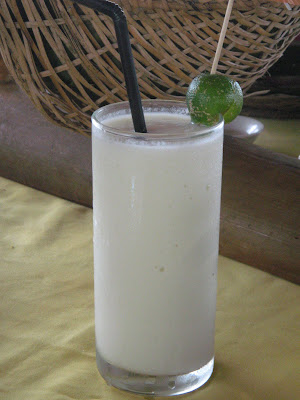 For refreshments there were fruit shakes and fresh coconuts, but I of course ordered durian shake, which was very good. 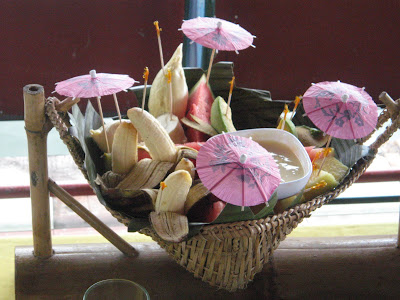 We finished lunch with a basket of fresh fruits - peeled bananas, smooth lumps of durian, wedges of avocado, watermelon and pineapple, crowding around a cup of sweet custard under pink, mini umbrellas.

It was a day of adventure, culture, and good food. All of which heightened the joy I felt for a wish come true.

*Update 11/17/11: From the comments to this post, nilagpang is unique to Iloilo, and may have been brought to South Cotabato by Ilonggo migrants. Thanks, Dr. Magsasaka.

I like your posts. Sometimes I visit many times before a new one is added, but that is a prerogative on your part.
Nilagpang or just lagpang, is an Iloilo staple that was probably brought to South Cotabato by Ilonggo migrants. I remember cooking it even before I was ten years old, and that was when to be able to cook chicken, you have to chase one first.

A rejoinder: South Cotabato is more Ilonggo-populated, while Davao is more Cebuano populated.

Dr. Magsasaka, my husband was just lecturing me on the politics of Mindanao, and he mentioned about the waves of migration from the Visayas.

So now I know Ilonggos brought nilagpang there. Inasal made into soup, eh? Good thing that the use of free-range chicken was kept in the practice. I would want to eat lagpang in Iloilo, though.;-)

Sorry about the irregularity of posts. Sometimes it becomes so hard balancing family, work, and, the most important all, passion, hehe.