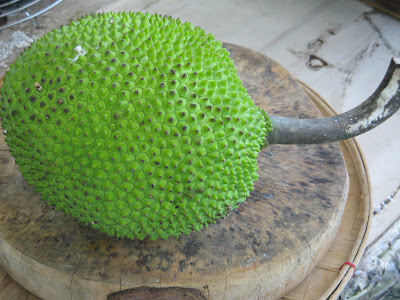 Common names in other Philippine languages
I got the scientific name and the regional terms from this website, but I'm not sure if they all refer to the same thing, and if they actually refer to the kamansi that I know.

The Pangasinan kamansi is a rotund green fruit, skin raised in pointed peaks all around, and very, very sappy. It is believed by the old folks to be a galactagogue - it purportedly aids in increasing the production of breastmilk. 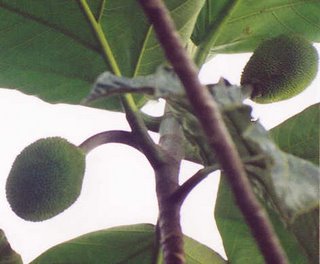 My in-laws have several trees growing in their backyard, and the fruits were all that they would feed me every time I gave birth. Probably partly due to this, I was able to breastfeed all my three children for as long as they wanted (the longest at more than two years) even though I always went back to office work after the mandated 60-day maternity leave.

The kamansi tree grows high, with large leaves - as in really large, big enough to cover one's head like an umbrella during hot afternoons - that are deeply serrated, similar to a papaya's. The fruits sprout singly on top of the tree year-round.

The fruits are eaten as a vegetable, in Pangasinan stewed with bagoong (salted anchovy paste) and topped with grilled fish. It is also stewed with meats (beef or pork), seasoning with salt or patis (the amber liquid by-product of bagoong-making).

It is never sweetened. The candied fruit uses another variety, which is seedless and is closely related to kamansi. Breadfruit, rimas, pekak, are all under the same family species as the kamansi, but are entirely different fruits. The first two are the seedless variety, the last one, at least in the Pangasinan term, refers to a smaller fruit riddled with small seeds that pop when eaten, and is cooked the same way as the kamansi. These come out only upon the onset of summer.

Langka (jackfruit), durian, and including the marang, are also close relatives, but are more of the "dessert" fruit kind, eaten when ripe (though unripe langka is also cooked as a vegetable). Kamansi and pekak are the "savory" kind, harvested young (the more immature, the better) and cooked unripe.

Mature kamansi is rubbery, the seeds hard, making it inedible. So the immature ones are prized, which keep up to about three days, but taste best when cooked immediately after harvest. 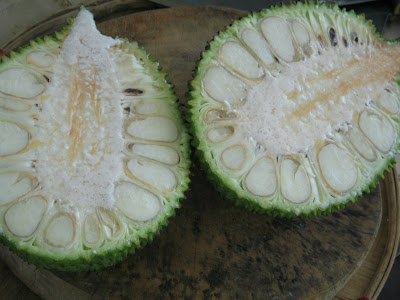 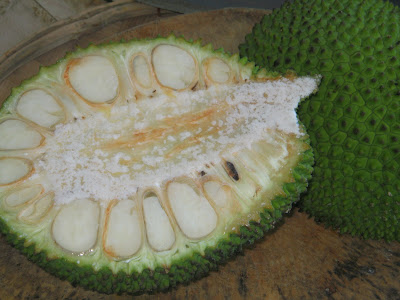 Oxidation at work a minute after slicing, turning the fruit "rusty" 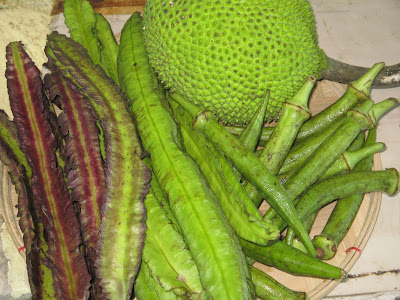 The common companions of a kamansi stew - cabuey (sigarillas) and okra. Sliced green papayas, if available, are also added, as well as string beans or yard-long beans and its young leaves/shoots. They are all constant companions, whether in the stew with bagoong or with the preferred meats, although in the latter the kamansi can be had on its own. 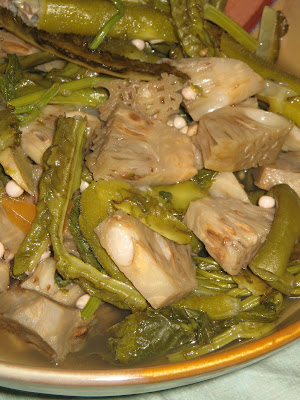 I know that kamansi is eaten all over Pangasinan, and in parts of Southern Luzon. In Metro Manila and Cavite they know the fruit, but vegetable vendors say they are rare, compared to the more common green/unripe langka.

Other Galactagogues
Ginataang Mais
Posted by Kai at 5:39 PM

in daet we call that ogob. In my lola's backyard, there is a tall widespread tree which bears that fruit which I have always mistaken for jackfruit. It is our vegetable for nilagang pork pata or beef, or cooked in coconut milk with young shrimps, smoked fish and dinailan. Or just plain boiled and dipped in patis with calamansi paired with fried oh so fresh fish. I miss my lola's cooking.

that's right we call that "pakak" in my hometown.

All I know is that the inside of this stuff looks very cool! Almost like a work of art.

Jerry, kamansi is the more common term, and it's the scientific term, too. Dia ed Malasiqui sananey a klase may tatawagen mi a pekak, aman may mantak-nek no gagatgaten. Grabe, we're literally neighbors but even in terms that we use they refer to totally different things!

I think pekak/rimas season is near, I hope to procure some soon so we can compare!

It is also called kamansi in Bacolod, but it is not as commonly eaten as langka and breadfruit.

We don't cook and eat unripe langka, actually, so I'm not really familiar with it, even the househelp. But kamansi - it's uber-common, that for a time I hated it - it could be so rough on a child's tongue.

Kai, familiar ka sa Mutiny on Board the HMS Bounty, noh? That great drama between Capt. William Bligh and Christian Fletcher, and one of the greatest survival stories of all time?

Oh! That's interesting. I seem to have missed that one. Was it based on a true story? Does that mean kolo isn't endemic here? How did they eat the fruit?

Yah, the story is the account of Capt Bligh of his ordeal. He was left on a small boat by the mutineers hindi malayo sa Australia, and he made it all the way back to England.

Yung breadfruit pinapakain sa mga British troops tuwing may gyera. Di ko lang alam what dish they make out of it. I guess sweetened din, because I don't know any other way you could have it, hehehe.

For sure kolo grows in other places, too. Kinuha nila ang kolo sa Tahiti, not far from Australia. But the crew didn't fall for the kolo but with the women there, kaya nung sinabi ng kapitan na u-uwi na ayaw na nila. They rebelled. He he. Mga babae talaga temtasyon.

Wow, I'd love to try kolo fried in latik! Hope I can visit Negros soon. I found candied rimas in Lipa and yes, it did taste like sweet camote. My husband liked it - I think he had it as a child. I would have to ask the elders back home.