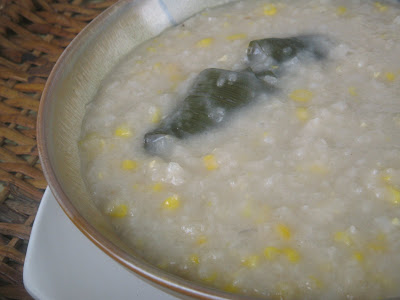 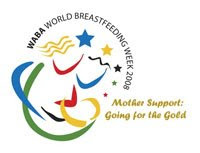 The World Breastfeeding Week 2008 is observed this year on the first week of August, and I could not let it slip by without a post about it.

I breastfed my first two kids, and I am currently breastfeeding my third. It had been, and is, my wish to breastfeed my children for as long as they wanted, which has led me to research on how to continue breastfeeding when our prescribed two-month maternity leave from work has lapsed, and I had to go back to the office.

I never had any problem with the volume of milk I produced during my leave, but apparently it is a different thing when the baby is not with the mother 24 hours a day. I wanted to provide 100% of my infant daughter's daily milk intake even when I am at the office, so I went on a quest to make myself keep up with her growing needs.

There are traditional foods in the Philippines that have been proven to help increase breastmilk production, as there are elsewhere. And I just recently discovered that there is a specific term for this type of food - galactagogues.

I found that in other countries, fenugreek, fennel, alfalfa, nettle, marshmallow (!), raw dill seed and blessed thistle are traditional galactagogues. I found a tea, Traditional Medicinals' Organic Mother's Milk Tea at the Healthy Options outlet at the Mall of Asia, that contains a combination of some of these, but generally speaking, most of these galactagogues are not available in the Philippines (except for the marshmallow, if it is the for-kids marshmallow that I know).

There is a warning, though, that these galactagogues are herbs and may induce unwanted side effects. I found that drinking the tea was not effective in my case, anyway. So I turned back to the Philippine traditional galactagogues, which are common food items incorporated in a lot of dishes eaten by all Filipinos, breastfeeding or not.

The most common is malunggay, the leaves of the moringa oleifera tree, which are added to soups and bean stews. Malunggay has been proven to be a very nutritious vegetable, aside from its benefits as a galactagogue, that it is also sold in capsule form. Shells cooked in gingered broth are also good for breastfeeding mothers, as well as any other soup.

My discovery, though, is gata (coconut cream). Nobody ever told me that gata greatly increases production volume, but I noticed that every time I ate anything cooked with coconut cream, the increase is significant, even when the dish is not "soupy," like latik.

So gata features a lot in my diet lately. And so the featured dish for today uses gata. Ginataang mais is a comfort food so perfect for the rainy season - it is a creamy porridge interspersed with the sweet crunch of corn kernels and made aromatic by the addition of pandan leaves.

Put in a pan the gata (2nd squeeze, about 4 cups), glutinous rice, pandan leaves and about half a cup of sugar. Bring to a boil over medium heat, stirring constantly. Keep aside boiling water to add to the porridge when it gets too dry. When the rice and corn have cooked (about 15-20 minutes, depending on the kind of glutinous rice used), pour in the kakang-gata (1st squeezed coconut milk, about 2 cups), lowering the heat and again stirring constantly, cooking for about five minutes more. Taste and adjust sweetness by adding more sugar or water, as needed. Can be served hot or cold.

I find it so ironic that there is such a movement encouraging breastfeeding infants, because for me it is a natural course, and should be observed without any thought as to alternatives.

The presence of such alternatives, which in the Philipphines is touted to increase infant brain development, does a lot in making mothers - especially the uneducated - think that alternatives are better.

I just love this television ad currently playing in local channels, which shows a picture of a sow with half a dozen or so piglets at its teats, and a female voice-over states "Ang gatas ng baboy ay para sa mga biik" (a sow's milk is for piglets).

Then a picture of a goat with a kid nuzzling its teat is flashed, and the voice-over says "Ang gatas ng kambing ay para sa batang kambing" or something to that effect (a goat's milk is for its kid).

Then a cow, all by its lonesome, stares at the camera straight to the viewer, and the voice-over asks, "Eh ang gatas ng baka, para sa anak mo?" (but, cow's milk is for your child?).
~ ~ ~
Posts on Galactagogues
Sabaw (Soup)
Tinola (chicken soup with malunggay)
Manok tan Labong (chicken with bamboo shoots)

oh this is my late dad's favorite!! im craving for a bowl of this now!!