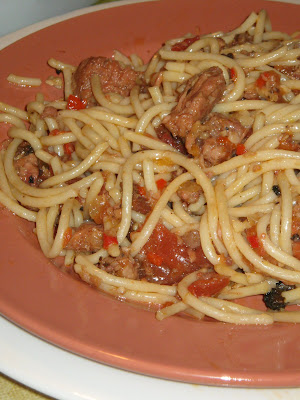 Just a quick pasta for a harried party. There are exactly six babies in my neighborhood born less than a month apart from one another, starting late last year. My own infant daughter's birth was penultimate of the lot, with the eldest baby turning one year this month. So it's a merry neighborhood, with six growing infants, and six monthly birthdays celebrated every month.

We usually just have cake, and some nibbles, reserving the big party for the milestone year. But sometimes we (meaning the mothers) find ourselves on an extravagant mood, and suddenly there are impromptou dinners under the moonlight and with flickering reflections of many multi-colored hurricane lamps.

I found myself in such a collective mood last weekend, with three consecutive dinners in a row. My daughter's birth day falls towards the end of the month, so I am usually last at my turn at hosting. Since it was on a weekend, and it was all rather unplanned, I was caught off guard - I do my groceries in Metro Manila, where the choices are aplenty (my neighborhood commissary is commonly lacking in party food items), and I didn't want to make the trip from Cavite.

So I scavenged whatever had been stored in the cupboards, and came up with this combination as the main dish. It was actually perfect, because I am posting this to join Dhanggit's perfect party dishes event, over at Dhanggit's Kitchen, in celebration of her daughter turning a year old (happy birthday, Mayumi! Such a nice and very Filipino name!)

It is perfect, not because it's a perfect dish, but only because it uses danggit, the favorite dried fish of the South - thin, boneless and butterflied rabbitfish, salted and sun-dried - which I assume to be the inspiration for our host's pseudo name.

The chorizo is also distinctively Southern - Cebuano to be specific. This pairing was actually a revelation. I had long been making pasta sauces using tuyo (dried salted herring), usually as a substitute for anchovies, like in puttanesca, or pesto. I've never used longganiza (the local term for chorizo, or garlic-cured pork sausages) before, though, and I'm glad it was on hand.

The danggit-chorizo tomato-based sauce was chunky and sour-sweet with my use of fresh tomatoes, aromatic with herbs and garlic, and rich with the meat and fish. The saltiness of the danggit cut through the richness, and provided moments upon moments in which to mumble mmm...?, and then mmmmmm!

I boiled two kilos of fresh tomatoes until the skin wrinkled, then put them under running water until cool. They were skinned and sliced, the seeds removed. Then I heated some olive oil, sauteed finely pounded garlic (two cloves), a big onion finely sliced, two red bell peppers chopped, and the tomatoes.

While all these were sweating out in the oil, I put about a kilo of thinly sliced longganiza (casing and knots removed) in a pan with a little water and turned up the heat. I turned them over while the water was allowed to dry up, then the heat was turned down to medium.

While waiting for the sausages to render fat, I turned back to the sauce, sprinkled some herbs (I used an Italian blend) and poured about two liters of boiling water and put the lid on. When the sausages had crusted a little I transferred them with a slotted ladle to the sauce and let it simmer. Then I tore the flesh of some five big pieces of danggit into tiny pieces and fried them up into crisps in the sausage fat, draining them on paper towels afterward.

The sauce was poured over a kilo of previously boiled and drained pasta, then topped with the danggit, some diced kasilyo (optional), five pieces siling labuyo sliced thickly, and everything tossed over. The kasilyo melted a bit (stretched) in the heat.

Note: I know it is a tall order for Dhanggit to procure danggit and chorizo in Southern France, where she currently lives. This post is as much for sentimental reasons as also a tribute to her Filipino heritage, which I hope she passes on to her French-born daughter.

But the Filipino ingredients in this dish can be substituted with anchovies, any type of sausage, fresh mozzarella, and dried chili flakes (or hot chili pepper sauce). And oh, I would have loved this with torn fresh basil leaves, but they were not available in my part of the globe.

Longganiza and danggit, fried, are common breakfast items in the Philippines, paired with slices of fresh tomatoes, and eaten with rice. It is usually one or the other and eggs, though both can be had at the same time when you are feeling festive, or have some guests in the house.

Danggit-longganiza pasta is like a deconstruction of this Filipino breakfast, or maybe a re-construction - minus the eggs (although sliced itlog na maalat or salted duck eggs can also be added for saltier flavor - notice I didn't add any salt to the sauce), the pasta in lieu of rice.

I would like so much to try this pasta. I'm curious how danggit blended with longganiza! I love your creativity ala McGyver and filipino ingenuity combined in this dish. Parties Filipino style is never complete without spaghetti! I miss this :-) Thanks so much for this entry, Mayumi will definitely enjoy this!

What an intriguing combination! Bookmarking this.

Well, it wasn't really creativity, Dhanggit and JS, just laziness, hehe, since I didn't want to go to a mall to shop, so I just combined what I had. It was great, though. ;-)

Oh my, I would love to get my teeth and my whole digestive system on longanizas....MMMM!!!! with fried eggs and the kalo-kalo! Sarap!!!! I think I need to take a break working on my Penn State Checks for a while and give myself a good breakfast with these! I can cook it right now and I have the most tasty longganiza here- TUNA LONGGANIZA with Itlog na bisaya kag kalo-kalo!!!! Wooahhh!!!! and this pasta with longganiza sure looks pretty masarap!