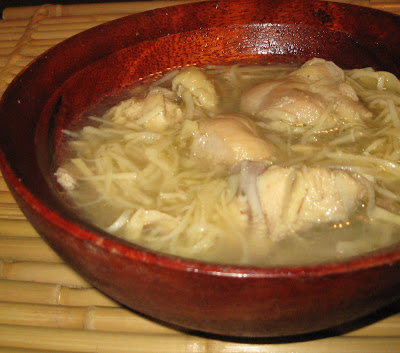 [Chicken with julienned bamboo shoots in broth]
It's been sufficiently cool lately, with rains brought about by hanging habagat (the southwest monsoon), ITZC, and the onslaught of several typhoons, that we've taken to having soup for dinner almost every night, to soothe the soul as much as to ease the physical chill.

The rains have dumped enough water to flood many places, the winds of the more vicious typhoons overturning two large ships and 21 smaller ones. Such is life in an archipelago. Always in peril.

But the rains are a necessary part of island life. For the source of piped-in household water. For electricity generated by hydropower, which is a significant power source in the country. For the source of irrigation for fields planted to the Asian staple, rice. For the general rebirth of life, from previously dry creeks and rivers, and the soil that had temporarily existed as dust.

The rainy season, a bit late in arriving from this year's extended summer, is usually heralded in our house with the appearance of labong - bamboo shoots - on our table. Groves of bamboo thrive at the back of my husband's family house, which is the usual source of our labong supply. In Cavite, labong can sometimes be had outside of the rainy season, probably because of the numerous waterways criscrossing the province, but these are rare occasions, relatively.

Labong is commonly cooked with saluyot, and this is the only vegetable that it is paired with that I know, in Pangasinan. But it is also cooked on its own, in broth with either chicken or pork.

Labong is used in most parts of South Asia, usually in gata (coconut cream) or in a stir-fry. In soup, labong is a main ingredient in the Chinese hot and sour soup, and in the Lao dish kang nor mai (bamboo shoot soup). The soups, though, are usually thick.

Labong soup in the Philippines, at least in Pangasinan, is clear broth. It is actually a dish like tinola - chicken in broth with vegetables. But instead of the vegetables (usually young leaves of sili and sayote, or green papaya and malunggay), the chicken is solely accompanied by labong, the soup spiced with ginger, onions and salt.

This is a fortifying soup, though not really filling, so it is eaten with rice. But it is laden with the purportedly heartening properties of chicken, enhanced by the benefits of bamboo. Incredibly, the nutritional value of bamboo include potassium and phytochemicals, aside from fiber.

Great soup, too - the goodness of chicken with a slightly woody dimension, soft (meat) and crunch (labong) together in a mouthful. 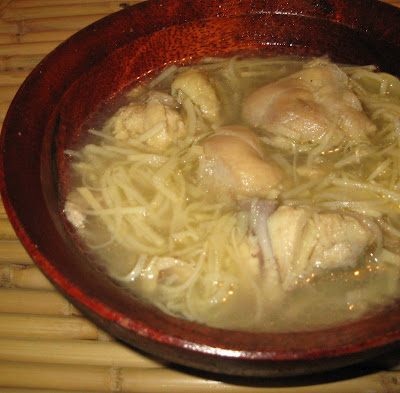 In a fresh pot of water put in chicken, thinly sliced ginger and onions, and a pinch of salt. Let boil until chicken is tender. Add previously boiled labong and cover, letting it simmer for about 15 minutes more. Season to taste. Freshly cracked black pepper can also be added for flavor. Serve hot.

If using labong that was pre-boiled when bought, boil in a pot of water for a few minutes before adding to soup. Check and boil longer if it is still not tender enough to eat. Discard water and add to cooking chicken.

This looks interesting to cook, reminds me of binacol - the chicken tinola with buko meat. Gives me an idea with what to do about it the next time it is in season. Thanks.

It's not like binakol, though, Gay. This is plain and simple chicken soup, no sweet hints.