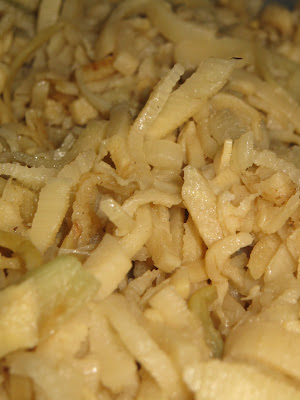 [pickled bamboo shoots]
This is not really cooked atsara-style, but more of an adobo, sauteed in garlic, onions then splashed with vinegar and left to cook. But it tastes pickled like a true atsara, sour and crunchy, and is eaten like an atsara, accompanying anything grilled or fried.

And we call this atsara in Pangasinan. It is what happens when shoots mushroom around bamboo groves during the rainy season, and somebody was greedy and harvested all too many of them. Bamboo shoots cannot last long, two to three days at the most, so they have to be cooked right at harvest, or boiled after have being sliced thinly and/or julienned and refrigerated, so they could keep a little longer.

So after eating them with saluyot and kamias, or in chicken soup, or stir fried with various vegetables, or in a thick sauce with meats, or sprinkling them on buro, this is another way of using the surplus labong.

Cavite vendors at the public market have been selling boiled, julienned labong for weeks now. When I make my purchase I am asked if I'm buying saluyot, too, and am offered fresh bunches of long-stemmed leaves. Not the uprooted short shoots that I'm used to in Pangasinan, but cut stems. The next vendor sells kamias, so I have my perfect Pangasinan labong stew.

I then ask what is used to season the labong and saluyot, expecting to be directed to the coconut graters for gata (coconut cream), but surprisingly the vendors point to the daing (dried fish) stall. There, to my amusement, I find bottles of Pangasinan bagoong. But there's also bottled bagoong Balayan, which I prefer, as bottled Pangasinan bagoong is looked down upon by serious Pangasinan cooks in the general scheme of things.

And I'm amazed, and happy, to find Cavite, my adopted home, and Batangas, my previous adopted home, harboring all the three ingredients that makes my Pangasinan labong stew. Labong, saluyot, bagoong, plus the kamias, which is pronounced kalamias or kalamia-as in the Cavite/Batangas dialect. It almost feels like home - the real one.

To make atsarang labong, heat a spoonful of cooking oil on a thick-bottomed pan over medium heat. When smoke is rising up saute a clove of crushed garlic, stirring until golden and fragrant. Mix in a whole onion that's been sliced, stirring as well until the onions turn transparent. Pour the julienned labong, previously washed and drained, and mix. Splash some vinegar and cover. Do not mix. After about five minutes, check if the vinegar had dried up. If not, put back cover and check again after a few minutes. Sprinkle some salt and pepper and mix, then turn off heat. Serve warm or cold. Can be refrigerated for up to two weeks, but the crunch will not last with time.

kai I have lost yr link... anyway I grew up hating this food but i know my taste buds have changed. Baka one day pag uwi ko dyan I will dare taste labong.

I didn't like atsarang labong when I was kid, either, but it's a different story now.....;-)

Different story for me, growing up I loved labong atsara or any style of cooking about labong. I guess it is an acquired taste, and I acquired it at age 6 maybe. Unfortunately have not had it for 20 years, the real labong of Pangasinan, not the one frozen in the markets of L.A.

Nancy, yeah, I've had amazing things in a foodhouse along that bitukang manok, too, on the way to Baler. Like paksiw na igat, which was most delicious I dream of it sometimes. ;-)