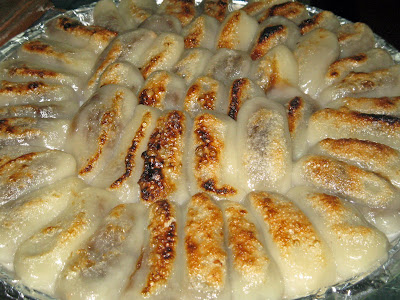 [A bilao of mochi]
I happened to be in the City of San Fernando in Pampanga for one day due to work, and prior to my trip I had asked around for suggestions on what delicacies to sample. Four food destinations were emphatically stated as musts, one of which should have covered my lunch.

However, a colleague at our branch in Sn Fdo happened to celebrate her birthday with a luncheon party while I was there, so the lunch place was out. Which left me with three out of the four. Not bad, for a city in a day.

Foremost of the suggestions was Susie's Cuisine, purveyor of Pampanga's native delicacies, in the central plains of the island of Luzon. I had sampled the popular fare before as pasalubong from friends and officemates, so I was happy to indulge myself and the family to the treats.

There was an outlet near the branch of the agency I work for, and waiting right by the counter of the outlet were two bilao of mochi, the inspiration for a buchi experiment among me and two friends - baked buchi.

But unlike that buchi, which was baked with the gata (coconut cream), the mochi was cooked on its own, and then sold with a separate sweetened gata to pour on when it is time to eat it. 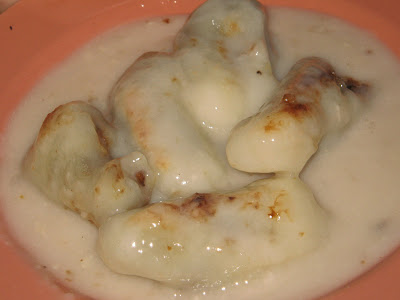 The gata was thick and silky, and sweet to compensate for the otherwise bland rice dough and bean paste filling of the mochi. At Php5 per piece, it is a cheap but heavy and satifying dessert, or merienda on a lazy afternoon.

I like to eat it hot, with the mochi steamed and the gata heated to almost boiling. I could easily finish ten pieces, and, needless to say, I bought an entire bilao. To share, of course. ;-) 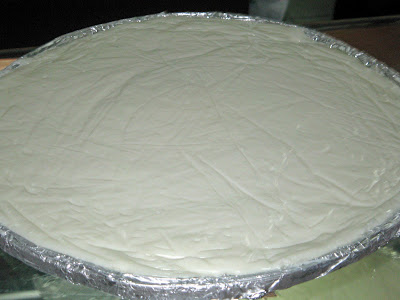 But my main purpose for going to Susie's was the tibok-tibok - sweet carabao milk pudding accentuated with dayap and topped with latik, or coconut cream curds.

It is also sold by the bilao (Php400), as well as by the slice (Php20). It is considerably more expensive because carabao milk is not commercially produced. 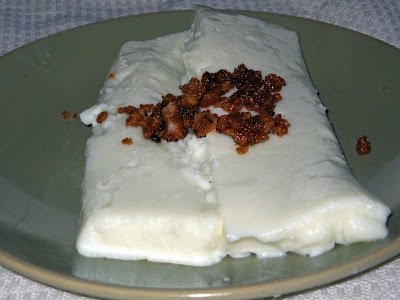 I love tibok-tibok - I love its velvety smoothness that caresses the tongue, its creaminess that engulfs the palate upon swallowing, and the punctuations of citrusy essence that the dayap provides, which foils the creamy progression of each spoonful, letting one go from one slice to the next. And the next. The latik topping gives a crunchy dimension to the texture, as well as nutty points to consider, bite after silky bite.

Have I said I love tibok-tibok?

It is like maja (blanca and con mais) - that common local sweet delicacy made with gata and cornstarch, but not as set as it is bound to be when too much binder is used, or when not stirred enough while cooking. It can also be compared to panna cotta, but which is gelatin and so sets a little harder. Tibok-tibok is silken soft, readily turning into mush when not handled properly.

Ever since the family relocated to Cavite I have been wanting to make tibok-tibok, since fresh carabao milk is available every morning where I now live. The milk lasts only for a day, even when refrigerated or frozen, so I was thinking tibok-tibok is one way of extending its shelf life, along with kasilyo, the local white cheese. But I haven't found the time to make both yet. 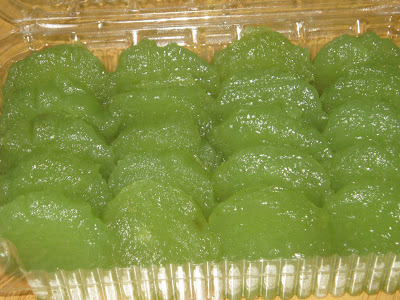 Susie's pichi-pichi (steamed cassava balls), naked because the grated coconut that should have enrobed them is also sold seaprately, so it can last up to three days (the coconut-covered kind is good for only a day)

This is a bit gummy, or chewy, rather like a green kutchinta in consistency. 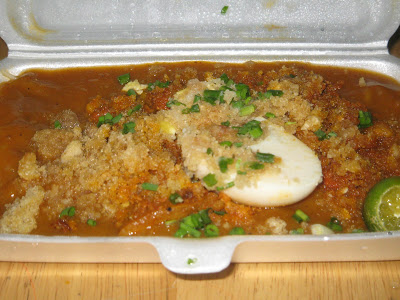 I had to include Susie's pancit palabok (Php40 per serving, good enough for two) in my take-home bag because it was also a recommended item, the main reason being one order is overflowing with noodles that it is such a bargain. I also remembered that this kind of pancit purportedly originated in Pampanga.

I was hesitant, though, because I don't care much for the pancit palabok at Razon's, a restaurant serving Kapampangan specialties. And just because one serving is good for more than one person doesn't automatically make it delectable - Filipinos have this tendency to rave about restaurants or food outlets that offer huge servings even though the quality and taste of the food, which are the more important factors, are not particularly worth raving about.

Anyhow, I bought four packs, two for a colleague who asked for them, and two for the family, because the husband will only eat pancit that has palabok on it. During the ride home the pancit's aroma was so enticing that I worked up such an appetite.

I had one pack for dinner. One pack was shared by my two preschoolers. One pack was grabbed by the husband. And the last pack was squabbled over between the four of us the next day. Which left how many for the colleague?

What did I know? It was the best - the best - pancit palabok I have ever eaten in my entire life. The noodles used were not the usual bihon (dried stick noodles) but a thicker kind - I haven't encountered it anywhere before - much like cappellini, or even angel hair pasta.

The palabok sauce was delicious - very, very tasty - thick yet readily absorbed by the thicker than usual noodles. It was darker, too, close to being red. The multitude of flavors that is the charateristic of palabok was sufficiently evident, satisfyingly rounded up by a squeeze of calamansi.

I gave a pack full of tibok-tibok to my colleague in lieu of the palabok. I'll remember to buy more palabok packs when I get to visit Susie's again. Hopefully soon. There is a branch at East Avenue in Quezon City, I hope they have palabok there.

the tibok-tibok and mochi looks uberly delicious! too bad the branches are kinda far, can't they put one somewhere near the south? :P hehe

you have to schedule a trip to sn fdo, hehe. but they do have one in qc, keep it in mind in case you have some business there!

I also love your foods...I just wanna ask do you also have franchising...kindly contact me with my email because I'm interested to put one in dagupan city. thank you

To the last commenter, I am not the owner of Susie's Cuisine. I suggest you contact any of the outlets enumerated above.

Hi good afternoon! me and my friend loves food. And when we tasted one of susie's cuisine we both liked it, but our place was so far from pampanga. What is the nearest landmark of their branch at east ave. or how can we get there if where just going to commute? thanks! and Good day!

I didn't know that Susie's Cuisine originated in Pampanga & that there were even outlets in Angeles City which is also 40-minute drive away from Subic. I buy my "Susie's high" in Capas, Tarlac,,, & swear by my grandpa's grave that it has the best moist chocolate ever baked commercially & locally, and at that price! The pitsi-pitsi is actually called mochi (a la Japanese) but this one has the Pinoy original taste to it with its gata, and even better than the Jap version!

I think, I am, a Capampangan by heart though I was born & grew up in Cavite City where the quesillo is famous and the carabao milk delivery in the morning (at your doorstep!)

Sorry I haven't been to the QC outlet.

Jen, I didn't know Susie's has good chocolate cake. And that it has an outlet in Capas! Thanks for the tip!

Everytime I visit Pampanga, my first on the list is to go to the popular restaurant's to taste their exotic dish! :)

My apologies everyone, but the owners are not into franchising. And we don't have a branch in QC. For future inquiries kindly add our FB Account instead: susies.cuisine@gmail.com

how to franchise susies cuisine po? im from bataan. actually we have here one.. can u please help me? thanks..