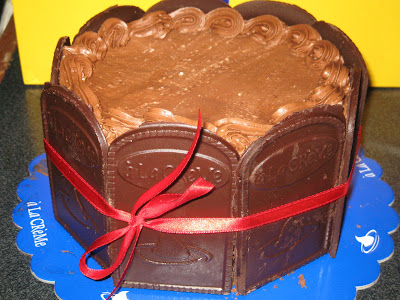 It is one of those food places in the provinces which has been known to my office colleagues for quite some time, from pasalubong of their counterparts in the provincial branches of the agency I work for.

It is an ingrained Filipino custom to bring food whenever you meet acquaintances, and we are the luckier for it. Branch officemates often request Krispy Kreme, which has so far opened outlets in Metro Manila only, but when it is their turn to visit (officially, of course), we receive a plethora of treats from the Philippines' 7,000 islands.

Aside from tibok-tibok, our colleagues in San Fernando City frequently bring the Sinful Chocolate Cake from a La Creme. Those dealing with branch people rave about it, saying nothing quite like this cake can be found around Metro Manila.

The cake doesn't usually last long enough to reach me, so its sinfullness had all just been hearsay. But after spending about a thousand pesos on tibok-tibok, mochi, and palabok at Susie's (from there the volume of food I took home could be guessed, since these native delicacies are quite cheap), I made a La Creme my second stop-over. Luckily, the two outlets are just about a block away from each other.

I asked the person manning the counter what the bestseller is (I don't know if this practice is right?), and she confirmed that it is the Sinful Chocolate Cake (whole cake about Php790, mini Php440, slice Php79). 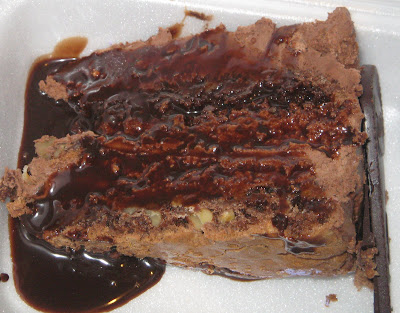 It is actually a chocolate mousse, interspersed with very thin, crunchy walnut-brownie layers, and set in shape by thin chocolate shards, each branded with the cakeshop's name, then finished off with a red ribbon. A slice is served with chocolate fudge sauce.

And sinful it truly is, literally - it was so sinfully sweet that after the first bite I could feel each and every, single, cell of my body perk up then go into hyperglycemic attack.

Probably because of that sugar overload, the mousse is very, very chewy - gooey - not your usual mousse with ice cream consistency. This, is full, 200% fat creamy mousse, and 500% sugar. I couldn't take a second bite, for deathly fear of becoming faint from my blood glucose shooting up.

But I had to find a redeeming value. I was in San Fernando for only a day, and I was determined to make the most of it, not caring if I become more sinful. 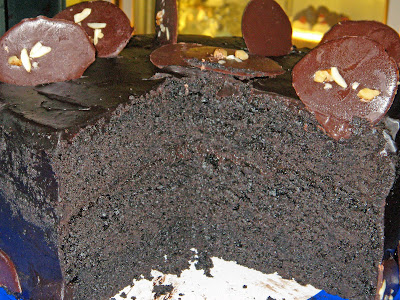 My salvation came with this solid brick of a cake, the second bestseller (see? I thought that practice of going along with the flow and joining the bandwagon wasn't good at all!). This, is the Belgian Chocolate Cake (about the same price as the Sinful). It was so dim inside the cafe that I couldn't take a proper photo - but it is quite obvious that this is one whole dense mass of a chocolate cake.

It is chocolate pound cake spread with a thin chocolate ganache and decorated with chocolate discs dotted with chopped nuts on top. It is so dense a needle wouldn't have gone through. It is so dark it is almost pure, 100%, chocolate. So silky and rich, and black as death.

And this time, as if somehow making up for the sugar overload of the Sinful, this Belgian is almost sugar-free. The dark chocolate is so overpowering the sugar was reduced to a hint. It screams CHO!--CO!--LATE!

Black is beautiful. And delicious, too. Delicious. Have I said delicious?

Now I know the best chocolate cakes are outside of Metro Manila.

Oh man, both those cakes look wonderful. And I admit, I'd probably have no problem polishing off the entire sinful slice!

Chocolate cake lovers to the core, Mrs. L and Mom!

i love the choco cakes from CHOCOLAT!