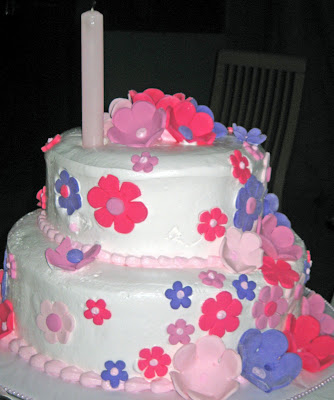 I've come full circle. It's been a year of delicious cakes, sourced from around the country's specialty bakeshops, or at least from several places we've found ourselves in, in the year that has just passed (in an amazingly expeditious manner).

A real, year birthday, though, calls for a "real" birthday cake. A birthday cake that may appear, and feel, in a kaleidoscope of colors and themes and designs, but deep inside all birthday cakes are the same - soft, cloud-like chiffon, with or without your choice of filling.

Or so I thought.

I had never ordered "designed" birthday cakes previously. Besides being so expensive, I wasn't thrilled with the pre-packaged decorations that screamed branding and commercialism.

I had always just bought a commercially baked marshmallow birthday cake - chiffon frosted with white marshmallow icing - and had it personally decorated, by myself, and sometimes with the participation of the celebrator, and other kids who happened to be present.

The design varied with each child's desired motif. So every year I had to decorate two cakes, for the birthdays of each of my first two children, that had been, at the least, exercises in creativity.

Every step involved in the decoration - from conceptualization to sourcing out the materials needed, to use of resourcefulness when it didn't turn out as pleasingly in reality on the day of the party - had required extreme stretches of imagination, and had been absolutely exhausting to both mind and body.

Yet immeasurably satisfying on both fronts - for me and for the birthday celebrator. As I said, wild imagination, coupled with a palette of watercolors (or crayons), some styrofoam and cardboard cutouts (pre-cut designs can be bought), commercially available plastic toys and resin or ceramic figurines, and we had recreated fantasies that had been unavailable anywhere else.

Plus, that unabashed pride on the child's face is priceless - incomparable stuff that proves parenthood can be, infinitesimally, gratifying.

And there is an added bonus - the decor, since they're real, could be used long after the party. I once had a superhero motif for my son, with all Justice League members I could find in Divisoria adorning the top of the cake, bleeping and talking in recorded voices and blinking red lights.

The Superman I had found was the kind which was suspended from the ceiling by a cord, and he was there flying round and round above all the superheroes like the real thing. He continued to fly and hover around the house (in a limited circle, of course) until the next birthday. The others served as extra presents.

I have practically given up, though, on the marshmallow cakes. They are turning up impossibly drier and drier every year. For my third child's landmark first birthday I wanted a good, and by which I mean a fairly decent and actually edible, cake.

I had found a bakeshop in Cavite City that makes consistently good marshmallow birthday cakes, but we had bought from it on a few occasions that its cakes were dangerously becoming close to being, uh, common and ordinary.

On a visit to Estrel's for a caramel cake I leafed through the cake catalogue, and belatedly realized that they do all sorts of cake for any occasion, using that heavenly lemon-kissed vanilla chiffon.

In fact, I was smitten by one design that I ordered it as is, thinking I'd just add a personal touch or two so as not to forego the tradition I'm trying to establish.

As it happened, that decision saved the day. Because we planned to incorporate two other celebrations - our housewarming, and thanksgiving for all the blessings that our family has received the past year - I was swamped with a gazillion tasks that, even though I went on a one-week leave from work prior to the party, I never found the time to hunt for cake decor.

It didn't help that a loved one was confined in a hospital for a minor surgery two days before the party. I almost wasn't able to pick up the cake. Estrel's policy is to bake and make the cake on the day of the party, and I asked to pick it up (they don't deliver) on the first hour.

But on that day time ran short, and I couldn't have spared a few hours on the road. Worse, I hadn't foreseen that the van was on coding (banned from major roads due to a traffic scheme in place) that day. I had to ask a ninang (godmother) to pick the cake up for me and ship it to Cavite (I'm thankful that Estrel's released it without the receipt).

At the ferry they would not receive unaccompanied goods for transport, so I had to send somebody to ride with the cake. When it arrived I just inserted a rose-scented pale pink candle I had the sense to buy previously, and promptly placed it in the lawn where we were to have the party.

So that's how my second daughter ended up with an unadorned, but designed, cake on her first birthday. Nevertheless, it elicited a lot of acclaim by its looks alone. Because the marshmallow fluff icing was almost two inches thick it looked like a fondant cake. And the flowers - colors according to personal specification - were whimsically scattered enough that it looked homemade.

It generated even more cheers when the candle-blowing ceremony was over and the cake was cut. The potent piquancy of lemons was so powerful it cut through the sweetness of the icing, that despite the thickness not a smear of frosting was left on the cake plates. And the chiffon - what more could I say? It mirrored the icing, and each forkful seemingly suffused the air with the scent of vanilla.

Which goes to say that I hope my daughter forgives me for this faux pas that wasn't really so. She's not that old enough, anyway, to appreciate any effort I would have put into a personally decorated cake. Her birthday cake charmed the adults as much as her kuya (older brother) and ate (older sister) and the other older children who were her guests. And that's good enough. At least until the next birthday.

Other Cake Features
The Cakes That Did Not Make It To The List
Pinkie's Fondant Cakes, Pinkie's (Dagupan City)
Sans Rival, et. al., House of Sans Rival (Dumaguete City)
Posted by Kai at 4:08 PM

Email ThisBlogThis!Share to TwitterShare to FacebookShare to Pinterest
Labels: cake of the month

You made a Justice League cake? You Rock! Marshmallow frosting? Oh yum, I don't think we have that here. And the cake is beautiful.

Having my own, er, cake sagas at the moment, I can so relate to this post!

Uhm, it was just a collection of all the available superhero plastic toys here. I think marshmallow frosting is called the 7-minute frosting.