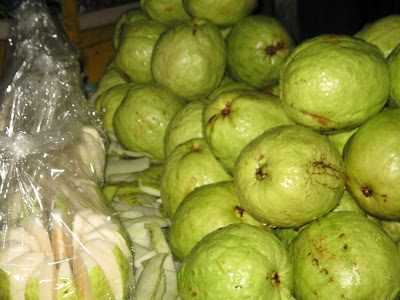 {washed and ready-to-eat whole and sliced guapples along a metropolis roadstand}
The name guapple, given to this extra-large, probably hybrid guava that had been reportedly propagated in the country from a species endemic to Thailand, is a contraction of guava and apple.

I suppose it is related to the apple, though no literature suggests this. Cross-breeding or otherwise, it is actually bigger than a large apple, or the size of the smallest local melon (sold at Php10 each in the public markets).

The flesh is more porous than an apple's, but it is cooked mostly the same way, and most commonly in a guapple pie (made famous by an old and venerated bakeshop, El Ideal, in Silay City, in the island of Negros down south).

But for those used to snacking on the more common local guavas, which are small (extra-large at about 3 inches in diameter) and which can just be had by picking on anybody's fruit-laden tree, the guapple, like all fruits blown up out of proportion, is bland, almost tasteless, which really can't be compensated for by the amount of flesh that can be eaten.

The guapple's flesh is crispier, though, since it is not as dense. The seeds are also less, but are far more distributed into the flesh, unlike the local guavas whose seeds are in a tight, compact ball that forms the fruit's core.

The price, at about Php30 per piece at its lowest during summer (it is available year-round, but the prices vary), is also prohibitive, considering nobody actually ever pays for the local guava. The local guava tree/s are largely considered a community/public property, and paying for a piece of guapple can be a real, snobbish act.
Posted by Kai at 5:34 PM

What I miss is biting into the smallish guava right after picking it, and finishing it up there in the branches of the tree. ;-) I always remember to bring salt to dip it in before climbing up.

I used to do that too, I brought my bowl of vinegar and salt and sometimes I asked one friend to climb the small tree, hehehe.