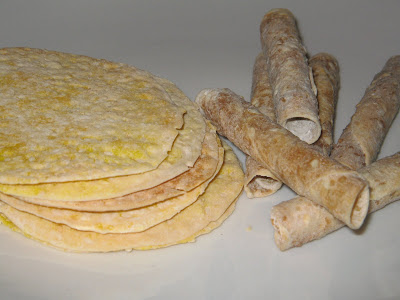 [Casa Carmela Kitchen's Crisp & Thin Kalamansi Piaya, Piaquillos]
For two weeks I got to enjoy super pastry treats from Bacolod City/Negros Island. Starting with that gracious present straight from the genteel city sent by a college friend, my sugar fix continued with the 22nd Negros Trade Fair at the Rockwell in Makati City.

The trade fair went on for about a week, which afforded me several trips back to sample the regional fare. It was quite interesting - though not much different from the previous year's in terms of exhibitors - because in the course of my buying spree I was guided by my Bacolodnon friend who is as proud of his ethno-linguistic/cultural roots as he could, and should, be.

And so I learned that the entrepreneurs showcasing the best of Negros are a mix of the old and the new. Starting with the newest and the most hip is Casa Carmela Kitchen, the country's sole purveyor of the thinnest, crispiest piaya. It is piaya modernized with cool twists - turned into paper-thin crispy biscuits, the traditional muscovado filling now in variations of mango, ube, pandan and kalamansi, spread very thinly so that the flavor is not overpowering, as well as not cloyingly sweet. There is still the classic muscovado, but at Casa Carmela Kitchen it has become healthier by turning into whole wheat piaya biscuit. 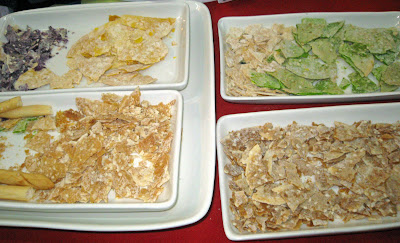 Casa Carmela Kitchen went a little further and beyond the traditional - by turning the regional piaya into something that could tease national and international taste buds. This was achieved by creating piaya cocktail crackers, in low salt, pesto and country herb variants.

Piaquillos, reinventor Millie Kilayko's (63917-3008736) latest creation, is an integration of the two popular Negrense pastries - piaya and barquillos - piaya, with the muscovado filling, rolled into cylinders. It is a bit tough and too thick for me who grew up on apas (as we call it in Pangasinan, stress on the first syllable) that crumble with just a teeny weeny pressure from your forefinger and thumb, but the piaquillos are perfect for ice cream and sundaes, not readily melting and you could be sure it won't turn soggy on you.

Casa Carmela's products are carried by most Negrense pastry stores. Another interesting product at the fair is the fiber-laden Saluyot Cheese spread/dip, among the various products offered at the Jarvis booth. It was great, with none of the slimy feel that turns off most people from the leafy vegetable. I didn't buy though, since I'm a Pangasinense, and even though I now live in Cavite, saluyot is still a weekly feature at our family dining table. I would love to be able to make this dip in the future, though, but at the fair I had not been bold enough to ask the lady manning the booth for the recipe, especially since she kept offering samples, and I kept passing by, actually going out of my way, to oblige her. 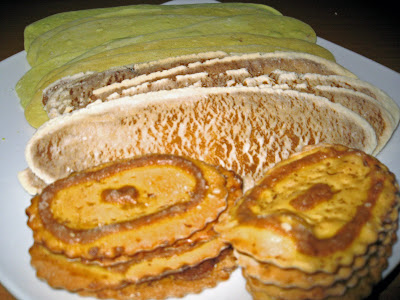 The most uncommon product sold at the fair booth were these huge, fan-like galletas, the texture of which I loved. They're not the chalky, parching galletas, thin yet not sharply so that they lacerate your upper palate. The muscovado flavored variant tasted intense - attesting to its Negrense roots. Negros, after all, is the country's sugar capital.

Another product that caught my eye because of its name is the Mascobana, soft cookies swirled with muscovado and banana. Such sugar high it's a miracle my blood sugar did not shoot up beyond normal. 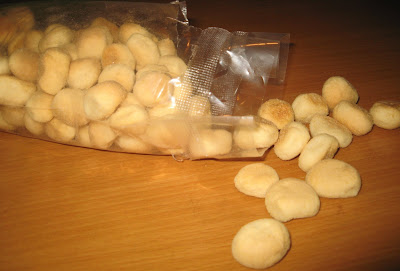 [Quan's Toasted Pandelitos]
This one came highly recommended by a very much travel-stained friend. I opened the big pack at home and its contents was gone in an instant. Imagine the experience of popping piece after piece of bite-sized pandesal with the maximum crunch. Out of this world. 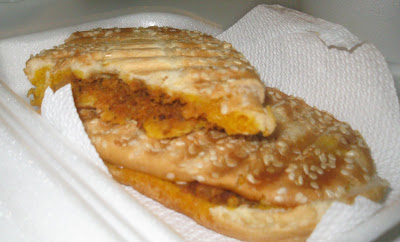 [Inasalan sa Dalan's Chorizo Panini]
Had dinner at Inasalan sa Dalan because the booth was adjacent to El Ideal's and I mistakenly thought it was the dining outlet of the revered institution. Turns out it's present at Jupiter Place in Makati City. My companions were attracted to the chorizo panini, and I think sometimes you have to trust what your eyes see as appealing (my son, at 5 years old, relies solely on the visual presentation of food when ordering/buying, having limited experience yet, and I'm always amazed at his choices).

Anyhow, the panini was good - better at breaking the sugar fix. It had to be served hot though, and not re-heated, otherwise it's rubber tough. The chorizo oil soaked the insides of the panini, imparting its full flavor to the bread. Great with a steaming bowl of molo soup. 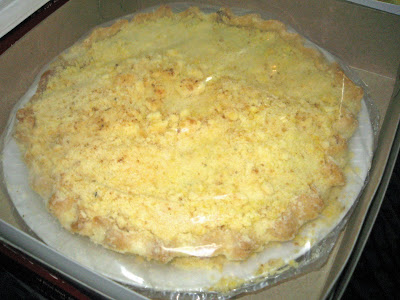 [El Ideal's Guapple Pie]
Of course the whole jaunt would not have been complete without a visit to the booth of the oldest, venerated El Ideal. And any visit cannot fully amount to anything without a box of the one and only guapple pie. It's not what constitutes the entire institution, but it comes close.

But if this post is crawling with ants already, let me add, anti-climactically, that El Ideal carries thick, blond-pale, sugar-free banana chips. And guess what, it's really without sugar. No substitutes, just plain old bananas fried to a crisp. It's like eating the toasted saba that my lolo had for breakfast every morning. There's a way to eschew sugar in Negros, after all.

i went to the negros trade fair.. i have been doing that for several years now. honestly i began to get less and less excited every year - i said to myself perhaps those guys were getting the artist's block because i began to see less and less new things. until i went to the casa carmela booth - what exciting new things. did you try their after dinner piaya? it was made of dark chocolate with mint. they were bite size, and the owner told me that you're supposed to take it with brandy or any liquer that suits your fancy - after dinner! what an exciting innovation. she certainly saved the day for negros fair. i vowed that it would be the last of their fairs i would go to...until i discovered casa carmela. now i can't wait till their next

Unfortunately for me, Martina, I only learned about the dark chocolate with mint piaya while researching for this post, which was already after the fair. I tell you I was close to tears. How could I have missed a minty chocolate piaya? But there was none offered at the booth the times I was there, and none were displayed at the cabinets showcasing Casa Carmela's products. Maybe I could twist the arm of some people in Bacolod.... (hint! hint!) ;-)