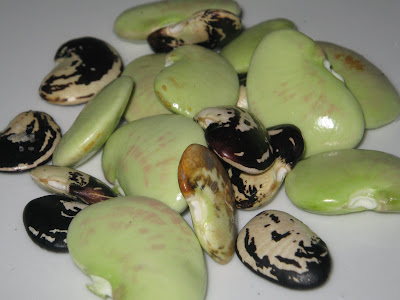 These fresh beans have been lately appearing in the spread of my suki vegetable vendors, both in Cavite and at the Guadalupe "peripheral" market (along the busy alleys where Ilocanos and Batanguenos sell, and not inside the sprawling official market building). I sometimes come across them still in their pods, and I buy them freshly shelled.

But at other times they come already packed in small plastic bags at Php10 each, or a mound of them are waiting for me to scoop a handful. The quality of the pre-shucked beans are not inferior to the freshly shelled ones, based on my experience. I don’t always cook them the day I buy them, anyway, storing them first in the refrigerator, so it doesn’t matter. 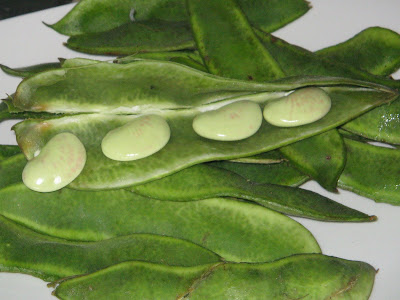 Ironically, it is only now that I am regularly eating patani. I never had them at home growing up. I don’t see them at the public markets I frequent in Pangasinan, either. The first time I ate patani was in an inabraw in Laoag, up in Ilocos Norte, at the onset of my adulthood. Which was just right since these beans are associated with Ilocanos. And now I understand Tagalogs eat them, too.

That first time, I don’t remember which vegetables were put in the stew. There was a humongous kaserola of it, to nourish a group of us, among other things, while enjoying the white beach of Pagudpud. What I do remember was that the entire dish was full of rough, brownish things. But I ate a bowlful of it, as eating vegetables was indelibly ingrained in my meal-time acquired behavior.

Patani are large relative to the dried beans I am most acquainted with – monggo, black beans, kidney beans, agayep (sitaw). But the texture of the inner flesh is very smooth, almost buttery, like finely mashed kamote. The kids deem the skins inedible so they discard them. 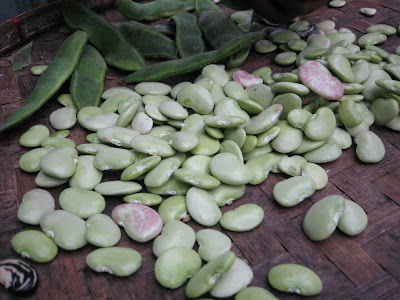 It’s just unfortunate that the beans boil to a nondescript brown color and don’t retain the delicate green hue while raw with that exquisite pink doodles on the surface. If they do I’m sure the kids would eat the skins, too.

I gather patani are called lima beans, and have been brought to the archipelago from South America. I see other kinds of beans here that are also popular in the American continent, like the white-splashed maroon ones, called Christmas lima beans, also known in Italy as fagioli del papa or Pope’s beans.

There’s also something like what’s called Florida butterbeans in the Americas, black and white in irregular patterns. All these are heirloom beans that are currently being commercially cultivated in the West.

They are collectively known as patani here in the Philipines, though I’m not sure if they are differentiated somewhere else. The extent of cultivation is not commercial, and a major part thrive in the wild. 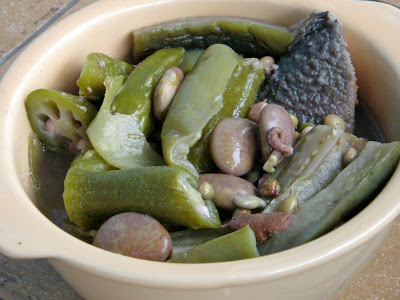 I like patani boiled with okra, bataw and eggplants, in a stew flavored with bagoong and topped with grilled or fried bangus. Sometimes with squash, sigarillas and malunggay pods. The green patani cook in a short time, but the Christmas and butterbeans require an overnight soak to soften them before cooking.

Perhaps making up for the additional prep time, the latter ones taste nuttier, ascribed to possess a chestnut flavor. It probably explains why popes adore them.

The vegetable dish pictured looks so good, but our grocery store does not currently have eggplants (nor ampalaya), and okra sells for an outrageous $4/lb. boohoo

The song brings back so many memories of singing it when I was young in Manila. Good memories. Thanks Kai. LOL Roz

Excellent article Kai, as always. One of my favorite vegetables when I was growing up is Ba-eg, Ilokanos call it alokon. I have always wondered where it comes from maybe a tree, bush, vine or sapling. I tried cooking the frozen ones sold here in the States inabraw style but it does not come close to the fresh ones on aroma or flavor alone. Any info is much appreciated. Best regards

Lou, haha, yeah, I like patani with okra and talon best! Maybe in a month more you'll be able to get them in SF? Or would you have to wait for summer?

Anonymous, I think these beans are highly valued in Italy.

Hi, Flipster, I love baeg, too! They are the flowers of a high-growing woody shrub, almost a tree. The young leaves are also eaten along with the flowers. There used to be a tree growing in the front lawn of my grandmother's house in Quezon City, but it has since perished. But I find them in many markets around Metro Manila nowadays, even at the SM hypermarkets. And it's incredible you can source them in the States, too! I've written about it previously, you can find the link here.

Kai, thanks a lot for the feedback, Baeg is shipped here frozen stiff and is labeled Birch flower. Any chance of a picture of the whole plant?

Ngayun ko lang nalaman ang itsura ng Patani. How lovely pala. What I only know was the Baguio Beans, as we call it in Davao. I don't know if pareho ba s Baguio beans ang Patani. Anyway, great post Kai. I've already subscribed to your blog. :-)

Flipster, it's a tree, I'll have to hunt one down. Can't promise anything, but I'll remember and shoot when I come across one.