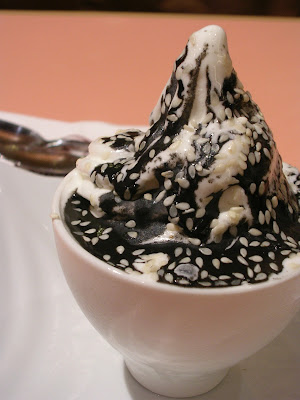 The proliferation of Korean and Japanese restaurants and food outlets in metropolitan cities is affording us a glimpse into the food culture of our Asian neighbors. One that I couldn't fail to notice - much because it is not common in the Philippines - is the use of black sesame.

I only know of one Filipino dish that uses linga, and that is palitaw, boiled sticky discs of ground glutinous rice flour eaten sprinkled with grated coconut meat, sugar and white or toasted sesame seeds.  But the use of linga is not an absolute - not all the palitaw I've eaten around the country boasts of sesame seed topping.

In Pangasinan, for example, we don't use it, but there is a variant made by my in-laws that submerges the dough discs in a viscous sauce aromatic with toasted linga and does away with the dry toppings, called masikoy. But the sesame seeds used are white, toasted in a hot pan to bring out the nuttiness and for color. For a while I thought all sesame seeds were white, and the brown and black ones were only according to toasting preferences.

I'm curious, though, because the children's folk song Bahay Kubo speaks of sesame plants flourishing all around a countryside backyard, and yet indigenous Filipino cuisine doesn't seem to have much use for it. Of course now sesame is in much use, the seeds as topping for burger buns, and as coating for buchi. I liberally use sesame seed oil as flavoring for noodles and vegetables. And in Asian restaurants we have battered fried meats and stews sprinkled with sesame seeds. But all these are rooted in cuisines outside our country. 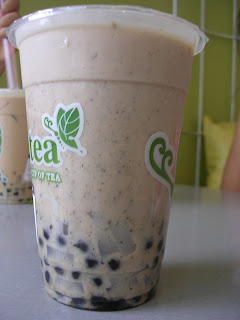 This summer was explosive with black sesame seeds. The nuttiness was ground and made into a tar-like  paste to top the goma sundae at Pepper Lunch, while a sprinkling of white sesame seeds ensured that the flavor is unescapable. It is heavenly, akin to eating cold, melting palitaw that does not sink as a rock in the gut.

I don't like Serenitea milk teas that much, but the selection is so varied that I go there intermittently to taste-test. The  black sesame milk tea caught my eye, and tongue. With a choice of roasted tea or assam as the base tea, it can be had hot or cold. I prefer the cold version, of course, in this heat. The black sesame is not even a flavored syrup, but real seeds that have been ground to a coarse powder so the drink comes out gritty. It is similar to the goma sundae, in melted form, and drinking it is like drinking a liquid palitaw. 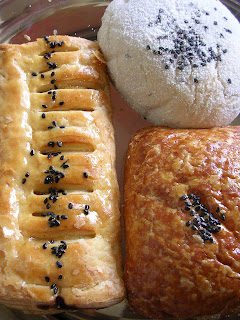 Outlets of the Korean bakery Tous Le Jours sprouted like mushrooms all over the metropolis, enlightening Pinoys to French goodies with a Korean/Asian touch. It is like a trendier, and more expensive, version of pioneer Bread Talk, without the floss. 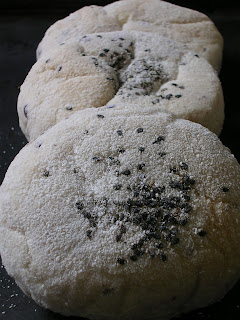 Several pastries sport black sesame seeds atop, like a crown of sparse cropped hair, but remarkable is one of their bestsellers, sweet black rice bread with black sesame cream cheese. An immaculate bun gets an ebony spray, and cradles inside a generous filling of cream cheese pocked with the seeds that shatter with crunch and nuttiness with every bite. It's like palitaw and siopao and cheesecake all in one. 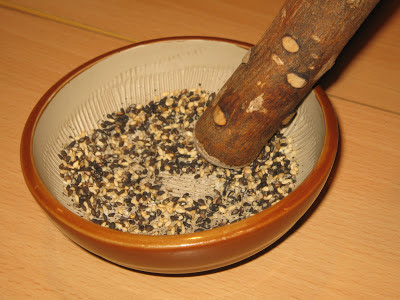 At katsu Japanese specialty restaurant Yabu the condiment tray adorning every table invites diners to season  and spice the otherwise insipid battered fried meats and seafood. But served with the entrees is a small bowl with notched interiors for grinding the spoonful of keyboard-hued sesame seeds. Grind to preference, then ladle in the gooey, dark-brown dipping sauce that's reminiscent of worcestershire and teriyaki.

The sesame salad dressing with black sesame seeds peeking out is slurpable, and is excellent both with the katsu and the unlimited shredded cabbage. I've found a similar salad dressing at the supermarket under the Kewpie brand, and it is just as good, and maybe even better, since I can have it at home to douse on whatever I fancy. 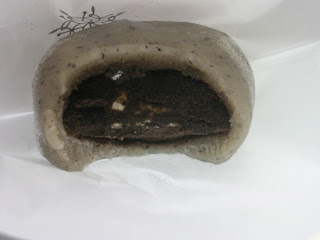 Among all the sweets mentioned in this post, the Mochi Sweets' black sesame mochi is the closest in taste and texture to palitaw. For of course both are made with ground rice dough so they have the sticky, chewy feel. But least of all is the black sesame taste tasted here, for it seems the filling is extended with black beans or dyed sweet potato. Which is unfair, considering the price of this small treat.