Today I am honored to have as guest in my blog, Rev. Fr. Rafael Victoriano D. Baylon, SJ, or Fr. RV for short, who grew up and studied medicine in the Philippines and went to the US for graduate studies, but ended up joining the Society of Jesus. He is now a full-fledged priest, having taken his sacred vows early this year, and taught at the Loyola University in New Orleans before hurricane Katrina struck. He is writing from Spring Hill College in Mobile, Louisiana, and joining us for the September edition of Lasang Pinoy, hosted by Celia Kusinera of English Patis, who wants recollections of food eaten during the typhoon season in the Philippines. Below is Fr. RV's remembrances.

The windows rattle as the gale-force winds slam against our house without ceasing. The rain pours down on our galvanized iron roof making a sound reminiscent of a discordant percussion piece. Outside the leaves are blown horizontally as branches break off from the trees and tin cans roll noisily along the street. Meanwhile, my two older brothers and I eagerly wait for the wind and the rain to stop so we could go out and play in the puddles or put our paper boats into the swollen creeks and watch as they float swiftly down the canal. But the typhoon is quite strong (it is signal number three (pertaining to the strength of the typhoon-publisher's note) so classes from grade school up to the university level have been cancelled) so we wait patiently inside the house. These are some of the memories I have as a young boy growing up in the Philippines where typhoons are as much a part of life as music and fiestas. But these memories would not be complete without the food we would usually have during such times.

The first thing that comes to mind is champurado which is sticky rice cooked in chocolate powder. This dish is perfect for a cold and stormy day because it is served hot. As a young boy I would volunteer to grate the unsweetened pure chocolate since that meant I could eat some of it while doing the job. It is interesting to note that after all these years I still have a very vivid image of the Antonio Pueo cacao cylinders that we used for this dish. Before eating the champurado I like to mix in some milk and a little sugar as well. And just like the cherry on top of a sundae, champurado would not be complete without dilis or dried anchovies sprinkled on top. During one of my visits to Mexico I was surprised to find out that they also have champurado there.

Another dish is ginatan. Although I like eating this dish while it is still hot, I also enjoy eating it cold. My brothers would fight over the bilo-bilo or the small, sticky rice-flour balls while I would go after the jackfruit and the camote, a kind of sweet potato. I would often help my mother and the cook make these balls and lay them out on a wet piece of cloth on the table, making sure they were not in contact with one another. The most exciting part, aside of course from eating ginatan, was when my brothers and I would drop the balls into the boiling pot. We often imagined ourselves to be WW II B-24 pilots and the balls we were dropping were the bombs. I guess this tells you a lot about what it was like growing up in a time when there were no personal computers, video games, cell phones or iPods.

The last dish is called palitaw. This dish is also made of rice flour that is used to make flattened and oval-shaped pieces. Similar to the balls in ginatan, these pieces are dropped into boiling water and would only surface once they are cooked or done. I guess this is where its name comes from since “litaw” means to surface. Once cooked each piece is slightly drained and then coated with grated coconut meat, sugar and toasted, ground sesame seeds. 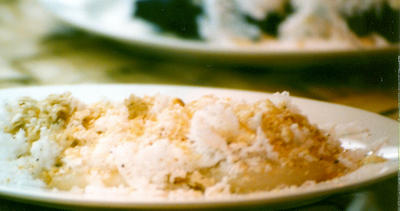 As I write this, the wind is howling outside as the trees bend dangerously low. It is raining and the puddles on the streets are getting bigger and bigger. I was living in the city of New Orleans until three weeks ago when I had to evacuate to Mobile as hurricane Katrina battered the gulf coast region. It is Rita’s turn this time. I close my eyes and pray. I also imagine having a bowl of champurado, a cup of ginatan and a small plate of palitaw right in front of me. And while these dishes could not reverse the damage wrought by these storms they remind me again, just like they did many years ago, that amid the turmoil in our lives and the world outside, there are some things that always seem to tell us, “This too shall pass”.

LasangPinoy2
Posted by Kai at 2:33 PM

Yikes! There's no escaping the Jesuits - they're everywhere!

Hi Fr. RV! Welcome to Lasang Pinoy. We hope you can join us in succeeding events.

Did you try to sample the Mexican champurrado? I read it's made from atolé and in the Philippines that translates to paste, literally pandikit, like what they use to make pandesal bags. Interesting this phenomenon of migrant food!

And it did pass ... here's hoping you and your friends there in Mobile and New Orleans are okay.

Really? They have champurado in Mexico. That's very interesting ... this is another one for our food origin buff Karen.

Thanks for joining us Fr.RV. Why don't you blog yourself. I bet you've got a lot to share with us - and not just food I mean. :)

Yey SJ (big cheer)! :) This was a beautiful post! Yes, there is nothing like a sweet memory to tide you over through stormy times...

another "hello and thank you, Fr. RV" from a SJ-brainwashed kid LOL. (not from ateneo, but my elem and HS years were spent in Manresa run by the Daughters of Jesus -- our retreats were always conducted by Jesuit priests). excellent post -- we can buy Antonio Pueo "rollos" here, you can imagine my delight when I found them at the Asian store. interesting about the Mexican champurrado -- my recipes are for the hot chocolate drink thickened with masa -- so they actually have a version that's more similar to ours?

Ah yes, there are memories that make us warm inside despite the wrath that mother nature brings.

Hi, my Father-in-law came across your blog, he thought I may like it and he sent your link to my inbox. I am Filipino too and married an American. You have a wonderful write ups. I will try to link it to my egroup in Filipinowives in yahoo. They will like the collection of recipes and some interesting stories to read.

Great post, Fr.RV! I hope all is well with you in LA. I love the palitao too! And since I can't have tuyo this rainy morning, I may just have champorado instead ;-)