Lasang Pinoy 2: Cooking Up A Storm 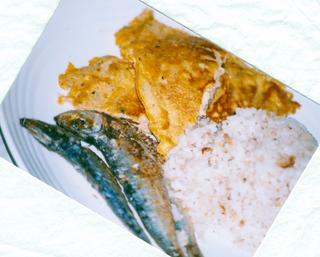 Celia K of English Patis is the host of the September edition of Lasang Pinoy. The theme, Cooking up A Storm, is very apt, considering the recent havoc wrought by Katrina and Rita. But it becomes more apt when you consider that the Philippines every year experiences quite a number of damaging storms and typhoons, or bagyo (which are how tropical depressions are called this side of the globe, before they go out to the South China Sea and become hurricanes). The bagyo season usually starts in July and ends around October, although we usually have storms up until the end of the year.

Pangasinan, where I grew up, is at the opposite end of Casiguran when it comes to typhoons - while most bagyo enter the country via Casiguran, almost all typhoons exit the territory through Pangasinan, whether or not they chose Casiguran as an entry point. So every year, we make the acquaintance of most typhoons that pass by and ravage the country.

Needless to say, Pangasinenses are no strangers to flying rooftops, uprooted mango trees, flooded ricefields. And floods. Before the Agno River was tweaked and configured, and before the Ambuklao was dammed, we used to have floods about every five years or so. And this was only during typhoons which brought so much rains that the Pantabangan dam had to be opened, with its waters let loose on the lowlands that Pangasinan would be submerged in inches of brown water for several days.

Almost every house in the province has flood marks on its walls. When I was quite small and we used to live in the house of my nanay, my maternal grandmother, we would evacuate to the second floor during flood season because waters would reach halfway up the ceiling.

It was not much of an inconvenience, since the kitchen and the toilet were in the second floor, and we only had to transfer our beddings. And being cooped up in the second floor was not too boring, because there was a big, capiz window facing the street where I could look out of. The street scene would be so serene, what with all the murky water barring all vehicles from coming and going.

Which meant no market for us folks - no vendor could go there and sell anything, and no customer to buy anything. And that's when the sari-sari stores make so much, with their shelves fast emptying of previously-frowned upon canned goods and dried fish.

There's usually no power during storms and typhoons, so my mommy usually cooked whatever was in the refrigerator. When all the provisions have been used up and the waters have not receded and there is no electricity yet, Nanay goes to the sarisari to buy eggs, tuyo and sardines.

I particularly remember one dark night, with fire raging in the dalikan (clay stove), I had my hands under my chin with my elbows on the dining table. I wasn't particularly feeling anything, it was just a nice, comfortable posture and all for my child's sensibilities, but my nanay said not to fret and not to be sad, because there is scrambled eggs with the tuyo.

Now, in Pangasinan, tuyo means dried anchovies. I never saw any fresh anchovy, and there is no other dried fish except dried anchovies (of course not counting one of Pangasinan's main produce, daing na espada, or dried swordfish). When I came to Manila I was shocked by the variety of fish that are dried (I think all kinds of fish are dried and salted). But when I crave tuyo only dried anchovies will placate me. I think this is the tonsoy sold in supermarkets, whose scales flake off easily when fried. The scales are how we determine how salty the tuyo is - if they look flaky, most often than not they are so salty you have to soak them in vinegar overnight (or in milk, to be sophisticated).

So during typhoons the tuyo is supplemented with scrambled eggs or, as my not-so-culinary mother invented, sardine omelet. This is not really omelet, but canned sardines in tomato sauce mixed with beaten eggs, then fried like a pancake. The omelet acquires an appetizing orange hue (appetizing at least for me as a kid, though I still find it so until now) from the tomato sauce.

This combination has been elevated to the status of comfort food for me that I now cook it occasionally - when the craving strikes, when I'm particularly down and out, when it is raining, when I haven't gone to the grocery in a long time and the provisions have ran out, or just when I'm not feeling so creative about breakfast fare.

It has lost its mark as typhoon food anyway, since now we get flooded almost every year, due to the "authorities" tweaking and configuring the Agno River, and the damming of the Ambuklao. The floods arrive often, but the waters recede fast. We have moved houses, too, and the new location doesn't get flooded. The market is just two blocks away, and there are many detour roads now to the market or to Dagupan City. We just have to contend with bangus that are so cheap the vendors almost want to give them away. This because they are harvested before a potentially damaging storm, and they quite literally flood the wet markets.

Hi Karen - I'm loving the mango tartlets! Thank you so much.

I'm sure your nanay and mom had to think of different ways of cooking bangus!

Ay Kai! You are making me crave! There is a particular tuyo (or is it daing) that I like called sap-sap. The most wonderful part of the tuyo for me, provided that it is fried to super-crispiness, it the head! So much flavor! :) Ooof...gotta stop thinking of it...it's bedtime for me now, not breakfast!

i still have lots of sardines in my cupboard just for times like you describe, when i'm feeling nostalgic for home. a great read, Kai!

Yumm! haven't had tuyo in sooo long. I'm wishing for some now, it's a rainy, dreary morning, and now I'm wishing I had this for breakfast :-(