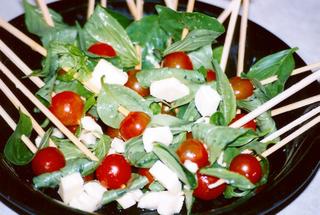 [Salad Sticks]
My Flynn bailed out* yesterday, and is now waiting for flying school graduation ceremonies next week. I'm one proud birdie, and one way to brandish my pride is to cook up a party! Not a full-blown party, though, since I'm reserving this for the graduation ceremonies one week away, but a simple one to celebrate an accomplishment and indicate my relief, and also in nostalgic remembrance of those who did not make it.

No, I'm not inviting anybody to the house, not yet, again that's for next week, but I'll be partying in cyberspace through a virtual blog party hosted by Stephanie!

Others have already arrived, bearing their creations. To the tune of Deep Forest's Pacifique, let me describe what I have on my cocktail table.

Salad Sticks
This is my variation of a recipe I found in the internet (sorry, I can't remember where...). Fresh salad that is finger food! It is simply assembling basil leaves, cherry or grape tomatoes and pineapple tidbits in small barbecue sticks or party toothpicks, dusting them with salt and pepper, and drizzling a few drops of olive oil.

The original recipe called for fresh mozzarella (I once used salty kesong puti from cow's milk, which contrasted very well with the tomatoes and sweet basil), but I substituted it with pineapple for this tiki party. The pineapple heightens the restrained sweeteness of the basil, enlivening the salad. It is a salad that is so friendly that the host does not have anything to toss, there is no need for plates and salad forks, and one stick, complete by itself, provides a crunchy mouthful.

Dalandan Slush
Laranghita, or dalandan in Tagalog, is a local citrus fruit that is not as tart as the local calamansi (key limes?) but is sweeter than an orange. Its being smaller and flatter than the orange earned itself its name, which is a corrupted Spanish term for little naranja (orange). This little orange's rind, like the calamansi's, stays green even when ripe, but the juice is bright sunshine. Processed in a blender with ice and some sugar syrup, this is a refreshing, tangy drink that sparklingly accompanies the dulong pate.

Dulong Pate
Dulong are these minute fish, said to be anchovy fry, that are abundant in the waters surrounding the Philippine archipelago. They are so plentiful that they are dried under the sun and sold as daing na dulong (dried dulong). Fried, they are so crispy, intensely flavored and packed with calcium and protein, good for breakfast with scrambled eggs and sinangag (fried rice). They also lend a salty flavor to stewed vegetables. Dulong can also be bought fresh from the wet markets and groceries, and these can be made into savory tortas (fried, floured patties), or as an appetizing dip for soda crackers and corn and potato chips.

Here is a recipe for Dulong Pate:
1. Rinse 1/4 kg fresh dulong and put in a strainer.
2. Mince very finely a clove of garlic and a thumb-sized ginger root.
3. Cook the garlic and ginger in 4-5 tbsps of white coconut vinegar for two minutes, without stirring.
4. Turn up the heat, then mix in the dulong, sprinkling a dash of table salt and finely ground pepper. Stir gently until all the fish turn white.
5. Turn off the fire and pour enough olive oil to coat the dulong.
6. Transfer dulong pate to a sterilized jar, and refrigerate at all times.
7. To serve, heat on low. Best as a dip for spring onion soda crackers. 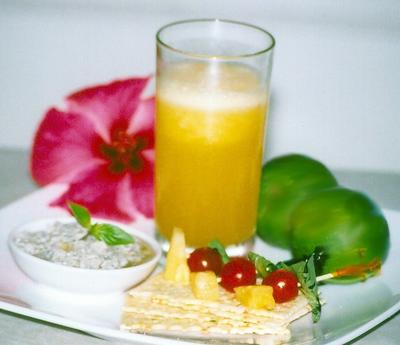 Here is the guest list and party food! Makes you want to join the next party!

*Bail out is the term in the flying industry for a pilot ejecting himself from a troubled aircraft, but is also a term for the ritual that is done upon landing from the trainee pilot's concluding flight leading to graduation. This involves the now full-fledged pilot taking his helmet and parachute from the plane and running from one end of the runway to the other, all of 5,000 feet, or more, all the while being bussed by the crawling plane he has just flown. The parachute is quite heavy, the runway long, and the prospect of being trampled by your own plane when you are about to graduate is unnerving, so this pilot certainly deserves a party!

I'm so very happy you could join in; trust me, it was worth the wait.

Those sticks sound fantastic! I only wish my husband would eat fruit (other than apples, he really doesn't touch it); otherwise, he would adore them.

The drink is exactly my kind of thing...I love tangy!

And the pate, while not something I would eat (what with being veggie and all) sounds very interesting.

My advance congratulations to Mr. Flynn. Wow, soon you'll be cruisin' 'round the archipelago.

kai, this looks very similar to what I made for a uk foodblogger reunion in May... http://thepassionatecook.typepad.com/thepassionatecook/2005/05/foodblogging_go.html - the pineapple version sounds intriguing, though, will have to try this soon! normally, mint is my preferred herb with pineapple, but I am easily tempted ;-)