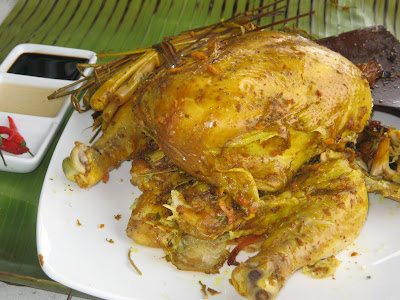 {Chicken seated on salt}
Chicken made to "sit down" on a bed of salt. It is whole chicken put atop a layer of rock salt and cooked in a covered banga (clay pot) over a woodfire. The salt draws out the bird's juices, which then steams it, resulting in a fork-tender, succulent chicken reminiscent of the Chinese white or steamed chicken.

And like the Chinese white chicken, or its kith and kin, the Hainanese chicken, it is served with a dipping sauce, to be mixed according to individual tastes. The usual Filipino sauce, though, is toyo (soy sauce) and coconut vinegar or kalamansi, and some finger chiles. 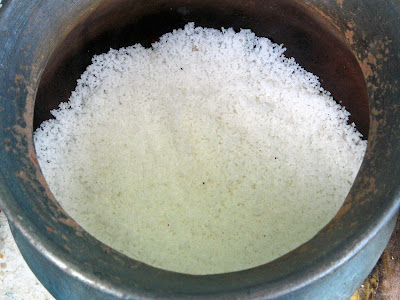 I heard about pinaupong manok from a barkada (buddy, friend) I used to hang out with whenever I went home to Pangasinan during college breaks. He comes from a family of butchers, and the both of us always took charge of cooking what we'd bring to the beach during group outings.

We never cooked pinaupong manok, but he recounted the basic procedure once when we were waiting for our adobo to dry up. He also said the chicken would turn a golden brown just like a lechon manok (roasted whole chicken), which was just beginning to be popular that time.

Then I got a job, and my vacations were spent scouring the country's islands, or somewhere else entirely. We rarely saw each other then, but I never forgot the "seated chicken." So when I got married and had my own kitchen it was one of the first things I cooked.

Because I lived in Metro Manila I didn't have the necessary open backyard in which to build a woodfire. So I cooked the seated chicken in a large, covered casserole pan over a stove top. After rubbing un-iodized sea salt all over and in the cavity, then rinsing it out, I pre-marinated the chicken for at least a day in kalamansi, toyo (soy sauce) and lots of crushed garlic.

After about an hour of cooking over low heat the chicken was done, but I was disappointed to discover a very pale chicken. So I put the pan lid back on and let the chicken cook for another hour, relying on my friend's promise of a rusty, grilled hue.

After two hours the meat was falling off the bone, but still anemic. I had no choice but to turn off the stove and lift out the chicken. The bed of salt had caked into a thick disc, but I was lucky no chicken part had stuck to it. 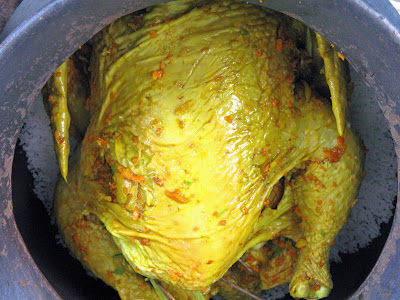 As I hadn't owned an oven or rotisserie, or even a turbo-broiler, until recently, this cooking method was my only resort if I wanted chicken without sauce but not fried. So I vowed to do it again.

I was haunted by the pale color, though. I was told by the househelp that no amount of cooking time will brown the chicken. I was thinking of achuete oil, but when the family moved to Cavite I discovered that luyang dilaw or luyang Tagalog (turmeric) is common in the public markets. And I remembered a friend from Iloilo saying that inasal (grilled chicken pieces in the Hiligaynon district) is rubbed with luyang dilaw.

So turmeric - peeled and pounded to a pulp - got mixed with my tested and proven kalamansi-toyo-garlic marinade. The rhizome dyes everything it touches a yellow-orange tinge (it's not really yellow ginger, as the name implies), including the househelps' palms (I usually leave the dirty work to them, hehehe...).

But the resulting seated chicken has a lovely orangey hue, almost more attractively looking than lechon manok. And as it is steamed, there is no mean fiber in it, but juicy and softly yielding all throughout.

The turmeric (Curcuma longa L.) doesn't make much difference in flavor. It looks like the real ginger root, though an emaciated one, but has no bite. But I prefer using it over achuete because of its medicinal properties.

I would discover much later, though, that pinaupong manok* is really meant to be pale, probably a descendant of the Chinese, or even the Hainanese. It is not even pre-marinated, nor seasoned. But it is a Tagalog chicken, served up during feasts in the provinces of Bulacan, Rizal, Laguna, Batangas and as far as Quezon, or in short, the area where the Tagalog language is spoken. 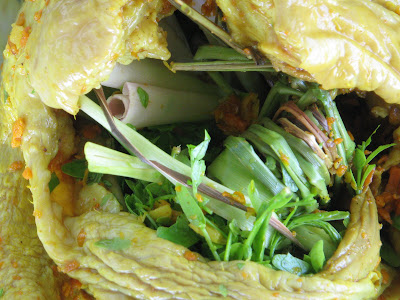 I have been stuffing garlic cloves and tanglad (lemongrass) into the cavity of my pinaupong manok, but for this last one I included young tamarind leaves. Before I cooked it I was texting a friend from Bacolod, and he mentioned that young tamarind leaves is used to stuff lechon manok in Negros.

We used to do that with lechon baboy (whole roasted pig). With chicken the sourness is pronounced, leaving not a hint of langsa. And because this time I had the opportunity of cooking it in a banga over a woodfire, it had a bit of smokiness to it.

I might say this is a truly Filipino chicken - incorporating the various flavors of the regions, using local and long-used seasonings.

*It is called only pinaupong manok. I had to qualify that it sits on asin because I had written about a similarly seated chicken previously, but it is in soup, without much salt.

agay met lay samit siguro yay pinairong yo ya manok. Man nilol ak natan tan narasan ak ya bigls. I was reading some food blogs and come across your site. I was happy that someone in my province do a food blog specially our local cuisine.. keep it up.. manlapod natan wala lay bas basaen ko.

nice recipe...what i usually do to get the brown color is that after cooking it pinaupo style, i put it in the microwave...

Rhea, that's a great tip, I'll try to pop my pinaupo in the oven afterwards, thanks!

food from microwave is not healthy... I don't advice doing that.... I suggest roasting it from an ordinary oven if you really prefer golden brown look.

Yes thank you for the concern I usually use my gas-fired convection oven, not microwave.

I remember my brothers cooking pinaupong manok for us in Pangasinan. They do it by wrapping the chicken in banana leaves and then putting it into a closed casserole that is big enough for the chicken to sit into. Then they stuff it with ginger, salt, pepper, lemongrass, onions, etc.. As far as I remember it should be cooked with a low fire until its tender that the bones could easily be separated from the meat.

Yes, thanks for sharing your version. I agree with the slow-cooking over low fire, and I might add over wood fire, not gas!