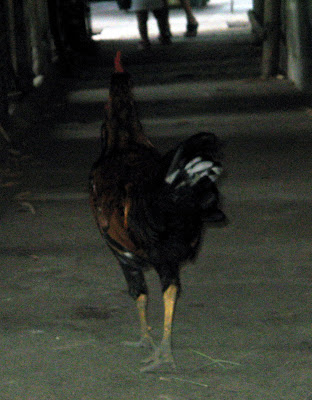 On Black Saturdays, during that part of my childhood spent in my paternal grandparents' house, I'd invariably hear my lola (grandmother) ask no one, in particular, what we'd have for Pascua. A sort of thinking out loud, what to cook up and serve during Easter Sunday.

And invariably, we'd have free-range, totally organic chicken raised in the backyard, in soup, as the centerpiece of the Easter meal. Even when we moved into our own house, when I was six, the family would still spend Easter Sunday with my grandparents, and we'd unvaryingly share tinolang native na manok after the egg hunts, year after year.

When I started cooking for the family at the ripe old age of twenty or so, I tried to cook other dishes for Easter. My grandparents had both passed away by then, and the crop of native chickens had gradually dwindled to nothing.

But the Easter meals still centered around chicken, though it was chicken I had tasted from my travels in and out of the country, and chicken that was "white-leghorn" (mass-bred and -raised).

When I got married I started spending the Holy Week with my husband's family, and I went back to eating tinolang native na manok for Easter. When we'd arrive at the house at the start of the holidays - on Maundy Thursday - we'd find a large rooster already cooped up, waiting for the slaughter at dawn of Sunday.

At my in-laws' the kitchen is not my turf, though I'd also hear the question what would we have for Pascua? thrown into the air, but specifically to the air around where I'd be lounging around. I'd just shrug, seeing the rooster, and thinking of my childhood days.

There is nothing as comforting as a steaming bowl of well-seasoned soup, with the essence of a muscled, organic chicken imparted to it from slow cooking over a woodfire. Even in a summer when the air is in danger of spontaneously combusting.

Accentuated with marunggay leaves, it's gratifying, for body and soul. And I want my children to experience Easter the way I did.

So when I'm craving to try a new dish, I'd just cook it as an addition to the tinola. The tinola will always claim its reserved place on the table, as long as I'd have my way.