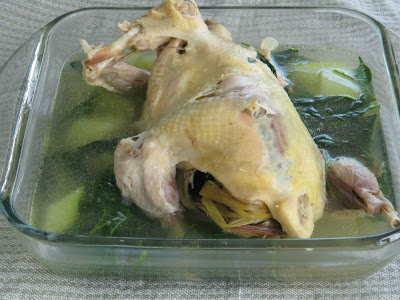 It's been raining intermittently for weeks now. On some days when it's not wet, clouds blanket the sky from all points of the compass. There are rare days when the sun actually shines through, but the slant is not as vertical as what we are used to this close to the equator. I once ventured out at noontime on such a sunny day a few days ago, and only got a very mild sunburn.

And last weekend at the market I happened upon the last live native (free-range and organic) chicken being sold by a lone vendor. He told me he had fifteen live free-range chickens for sale that morning, but a buyer had purchased all but the one left. It was a hen, before having hatched eggs. And I thought, with the weather and all, everything conspired for a tinola (chicken in broth) on our table.

But not the tinolang native na manok I had as a child, during Sunday dinners with my paternal grandparents. Prior to last weekend I had been dying to try a new chicken soup, an Ilonggo tinola - supposedly how chicken soup is done by Ilonggos, or in the region where the Hiligaynon language is spoken, in southern Panay and northern Negros, in the Visayas region.

I didn't learn it from my numerous Ilonggo friends, though. I have a neighbor who came from Zamboanga, in the island of Mindanao, who told me about this chicken soup recipe she had picked up from the Ilonggos. So this is a cross-country chicken soup - recipe from Panay-Negros, taught by a Zamboanga native to a Pangasinense who cooked it in Cavite. Truly Filipino, spanning north and south and through the center. 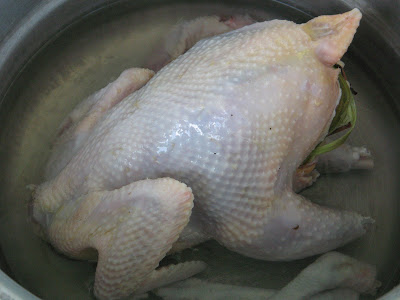 Whereas tinolang manok uses cut-up chicken that is boiled in water with ginger and salt, this chicken soup - pinaupong manok - uses stuffed whole chicken boiled in just salted water. But both are best with free-range, organic chicken, because they are cooked with minimal seasoning - just enough, and specific enough, to bring out the chicken's full flavor and essence.

The emphasis is on live, free-range chicken, because anything native loses flavor when frozen. I had been on the look-out for them. There are frozen, dressed native chicken sold in groceries, but I might as well have used broiler or white-leghorn (the term for mass- and commercially-produced chicken), which is cheaper at Php130 per kilo. I bought the live native chicken for Php220, while frozen, dressed organic chicken is sold for Php500-600 per kilo. Frozen native chicken and broilers have the same bland taste.

Pinaupong manok literally translates as chicken that was made to sit down. This is because the whole chicken is made to "sit down" in the cooking pot. Actually it is on its hands and knees, or rather on its wings and knees. The chicken is rubbed all over, inside and out, with coarse (sea) salt, and a bunch of lemongrass is stuffed inside the chicken cavity. It is put inside a deep pot, wings and legs resting on the bottom. The pot is then filled with water half-way up the level of the chicken. 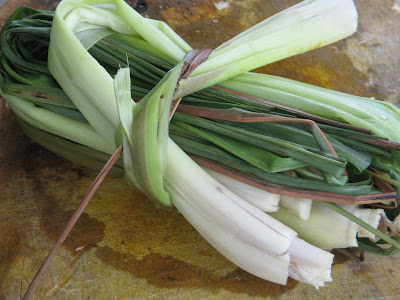 [Lemongrass in a tight bundle]
The chicken is cooked over medium heat for about two hours, or a little under an hour if using a pressure cooker, although slow-cooking brings out the flavor better. The cooking will take longer - about an hour more - if using cull, or chicken past its egg-laying stage.

When the chicken is tender, a bunch of young sili leaves is added to the pot, putting back the lid but turning off the fire. I added chopped sayote fruit to up the vegetable content. This is best eaten steaming hot on a rainy evening, with patis, kalamansi and sili on the side, to be mixed and added according to individual tastes.

Pinaupong manok, in soup, is wholly different from tinola, in that it doesn't have the taste of ginger that is the distinct characteristic of the latter. Pinaupong manok is peppery from the sili leaves, fully infused with the flavor of native chicken, with a slight tang from the lemongrass. A certain sweetness was provided by the sayote I put in the pot.

An invigorating soup to ease aching bones and enliven tired minds. Bring on the rains and the cold winds.

Mananam a talaga, kasi native! Maybe "pinairong a manok"? Anyhow it's not an original Pangasinan dish, so there's no term for it in our language. Basta masamit!