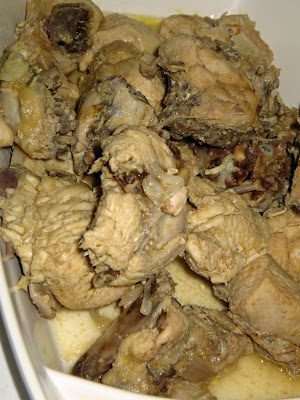 Speaking of fiestas, here is one dish that's guaranteed to make its appearance in homes anywhere in Luzon during fiesta time. The taste brings to mind the days I spent touring barangays and towns attending fiestas, in Pangasinan, in Batangas, in Quezon province, Bulacan, Nueva Ecija. And even in catered birthday parties in Metro Manila, this dish, called pininyahang manok, is also present, though in a more presentable manner.

So it's nakakaumay - I don't know if cloying is the appropriate translation - for me. Which is ironic, because pineapple juice is added for tang and sweetness, specifically so that it doesn't become cloying. Maybe it's just weird me, since I am not particularly enamored of pork.

But we had this last weekend because almost the entire immediate family of my husband came over from Pangasinan, and it felt so much like a fiesta.

It is cooked by sauteeing cut chicken pieces (or pork, preferably hock) in lots of garlic and butter, then pouring pineapple juice on it and letting it boil until almost dry. It is served garnished with pineapple cubes or slices.

A Quezon province version uses whole chicken, boiled for hours over coals until dry. The resulting chicken is very fragrant, fork-tender with caramelized skin. Salt is optional, as is the use of pineapple fruit garnishing.

This is a nice viant and pineaple is a one of a good mix for meat..
If you go to a restaurant here in the US .. all those chicken flavored with pineaple .. they name it as "Hawaiian chicken" in the menu. Don't ask me why .. I use pineaple in "caldereta"
Keep up the good work and teach us to cook .. I am learning
Bert

Hi, Mang Bert, long-time no hear. I have heard of the term "Hawaiian Chicken." I think all things with pineapple in it get the affix "Hawaiian."