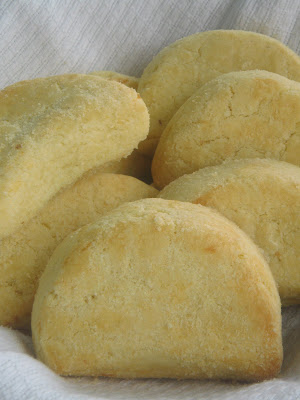 This is a distinct half-moon cookie, a unique creation I found in Puerto Princesa in Palawan. I also saw it at a bakery atop the Airmen’s Mall in Villamor Air Base, Pasay City, late last year, but which I construe to be something that was brought to Metro Manila from its place of origin.

Its name takes from the cookie’s shape, but it is unique, in that it is somewhat a cross between an English scone, or an American biscuit, and a shortbread. The crumb is soft, flaky but crumbly, buttery and a bit sweet, the outside crispy with an egg wash sheen. The bit of sweetness makes it ideal to consume on its own, with a hot drink, but is also very nice paired with butter and jam, or cheese, chives and sour cream.

So it is distinctive enough from other half-moons, such as the Southern American half-moon cookie which is covered with chocolate, half-dark and half-white. Or the half-moon cake I indulged in during a recent trip to Bacolod City, which is chiffon topped with a layer of yellow custard.

Palawan’s half-moon cookie comes in a pack of six pieces at the street corner bakery at the side of Puerto Princesa’s Roman Catholic cathedral, where wood-carved souvenir items are also sold. It is also available at the ground floor bakeshop at the NCCC Supermarket, but I kind of like the texture and taste of the first bakery’s half-moon better.