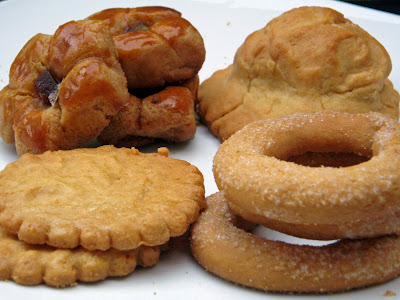 Tacloban City is the trade and commerce hub of Leyte and the island of Samar to which it is connected by the country’s longest bridge, the San Juanico. It is the regional center of Eastern Visayas , politically recognized as Region VIII.

So in terms of food, one can find in Tacloban many delicacies that are specialties made in the outlying towns of the two linked islands. A visit to the pasalubong shops lining Zamora Street will yield pastillas from Carigara, tortas from Calbiga, binagol from Dagami, moron from Abuyog, akin to a mini tasting tour of the entire region.

My office colleagues in the area have a trusted suki (favorite vendor) at Zamora, and I was taken to Aida’s for my pasalubong shopping. The orders were called in in advance, that the trip was just actually to pick up an already packed box, but I managed to find other things to insert into it, like fragrant chocolate tablea (ground cocoa beans formed into discs).

But over-all the package contents were disappointing. The moron were hard, the torta too dry despite its "special" designation (lard was used as shortening). The pastillas were just so so. Good thing I was taken next to an outlet of Charito’s Cakes & Pastries, which originated in Catbalogan, in the northern portion of Samar.

The products are packaged as Charito’s Delights, an identified OTOP (one town, one product, local specialties of a specific place) and awardee as an outstanding MSME (micro-small/medium enterprise) in Samar. I mention this because the pastries and cookies were like nothing I have ever encountered. They are every original, and in every sense delicious, the finest local cookies that can be found in the islands so far.

Emphasis is on the use of pili nuts in the products. Before I went to Tacloban I didn’t know pili was also abundant in Eastern Visayas, as it is a popular product identified with the Bicol region. But it makes sense, since Samar-Leyte is in the same eastern corridor adjacent to the Pacific Ocean as Bicol, and it is easy to think the islands are just a “continuation” of Bicol.

I bought packs of roscas, coriosos, hopia de pili and delicias de pili, all of which I have never heard before, but whose names sounded like a ring of fairy bells to my ears. Plus mazapan de pili. Mazapan is common in the Southern Tagalog region, made of eggs, sugar and milk and peanuts. I think it is a riff on the Arabian confection marzipan, which is made of almonds, and is used prevalently in feasts throughout Europe, and is also called mazapan in Latin America. Tacloban's mazapan is pili-based, ground, sweetened and shaped into thin rectangles. 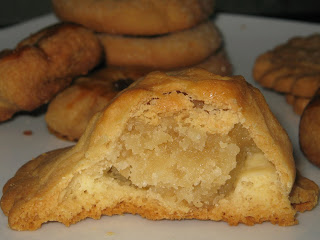 The biscuit roscas can be found in any island in the Visayas, but Charito’s version is a notch higher with its crispness and those sugar crystals glittering like diamonds all around it. These ring-like cookies are so-named because they resemble those plumbing/automotive parts used to connect pipes or cylinders. 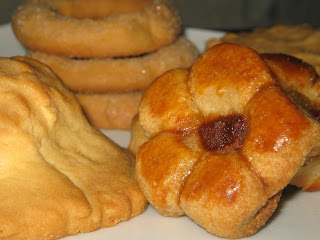 Coriosos are flat discs akin to butter-cookies, moist but crisp. Hopia de pili is unlike any common hopia but shaped like a tiny buttery empanada, protruding in the middle with its treasure of ground sweetened pili. It is a traditional delicacy of Calbiga.

But it is the delicias de pili that are the shining stars of the lot. Shaped like a flower/star, these are soft, buttery pastry filled with ground pili nuts and dried local fruits. True to its name, these are definitely, and definitively, delicious.

shucks! the hopia de pili looks so good! my grandma used to make something like that before.. they are form bicol kasi :D i love pili pa naman! they also have that chiffon cake with ground pili filling in bicol also.. sarap!

It's my turn to say SHUCKS! I am so intrigued by that chiffon cake. Sounds like inipit, but with that pili filling, it should be very luscious!

Hi po. i've been following this blog for sometime na ever since I found ur post about Charitos delights. I work for the government promoting food from the pHilippines. Baka u might want to visit IFEX its a food show held every May at the World Trade Center. I'll give you invites po. :) and I Borrowed po some of your enticing pictures of Charitos helping us promote it to foreigners :) Kudos for the Philippine food industry and awesome food bloggers :)

Yes I'll be very interested in going to the IFEX thanks for letting me know. Your using my photos of Charito's is okay with me, especially since it's for promotion of Philippines products, which this blog is all about, though I am of the opinion that the promotional photos being used by Charito's Delights itself are really great and better than mine.

I'm from Quezon City and I would like to buy some of your products. Do you know a place here in Metro Manila where I can buy them? Thanks.

Thanks for this. Im just new in catbalogan. Will check this tasty store sometime.:)

I wonder if you can share your recipe for corioso & roscas. Will be greatly appreciated!