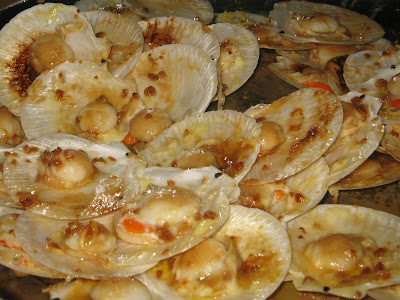 I bet nowhere in the Philippines, and probably even across the globe, can one find a seafood buffet spread of baked fresh scallops on the shell, fresh blue crabs done three ways plus crispy crablets, grilled tuna panga (yellowfin maw, or jaw), fried shrimps, plus a host of meat dishes including a goat stew, all in unlimited servings for the measly price of Php200 (roughly US$4). 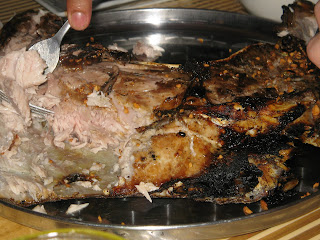 But such a buffet exists, tucked in the nooks of the calm and quiet city of Tacloban. The area’s congressman may have received much flak recently for paying about a million pesos (US$20,000) for a dinner in Le Cirque New York for the Philippine presidential delegation on a US trip. But in Tacloban City, no such distasteful overspending is required. 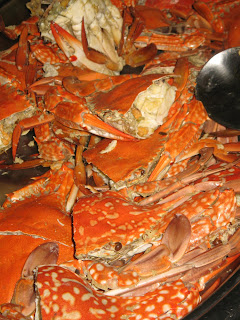 Seafood is abundant, freshly caught and cheap. That’s why Stephanie’s Smoke Haus can afford to offer such a buffet. I believe it is a family enterprise, with spouses and children and the househelp succeeding one another in bringing out trays of newly cooked food from the kitchen to unendingly replenish the spread.

I was in Tacloban to attend the regional managers’ conference of the agency I work for. It is customary for such conferences to end in a dinner featuring the best the region has to offer, with post-dinner socials afterward. The regional head took the group to Stephanie’s, and it became the highlight of my trip.

Stephanie's had the ideal provincial ambience – it felt like eating in a welcoming home, buffet traffic interspersed with bumps with the owners refilling food, who encourage diners to keep on eating with typical Filipino generosity. There’s much more food being cooked in the kitchen, try this, try that!

This was kept up even though the place was packed, all tables occupied, on a Thursday evening. During our almost two-hour stay there we witnessed about two turnovers of tables, yet the food kept coming, the jovial and relaxed atmosphere maintained throughout. 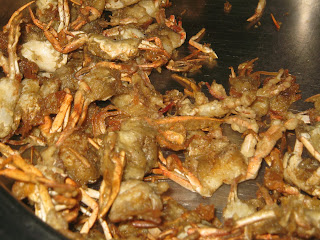 It was an amazing experience. It boggles me no end how the owners recoup their costs. Upon a visit to the wet market the following morning I learned that fresh scallops cost Php180 a kilo, and I believe I had eaten scallops worth more than the price per head of the buffet. And this goes without saying that I had eaten many other things besides. 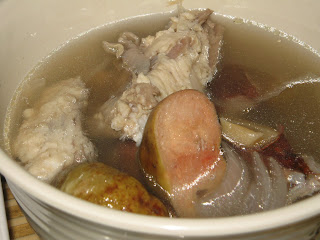 Of course there was nothing fancy in there. The seafood was cooked simply, with very few ingredients (just the way it should be). The scallops were just laced with melted butter and fried minced garlic. The crabs were steamed, stewed in coconut milk, plus there were crab cakes for those who couldn’t be bothered with breaking shells. The grilled tuna was served hot off the grill and came directly to our table. A fish soup was refreshing with the addition of halved batwan. 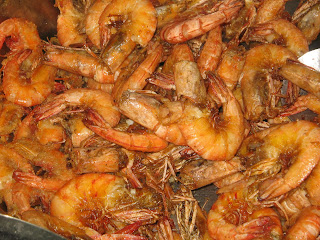 But everything was fresh, and newly and impeccably cooked, home-style. And this is all that matters when it comes to seafood.

There were fried chicken, lumpiang shanghai (seasoned ground pork rolled in paper thin flour wrappers and fried), chicken adobo, meat loaf, and other dishes I can’t remember, because I chose to overlook them, concentrating instead on the seafood. 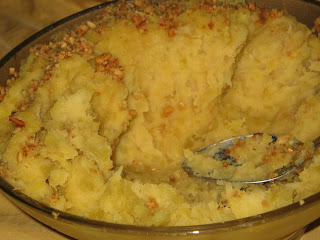 The desserts were simple, as well. The typical gelatin desserts, canned fruits. But there was this viscous mashed kamote (sweet potato) pudding sprinkled with chopped peanuts that was over the top. It was so delicious that it surprised me. I had to ask the strapping man (looked like the family head) refilling the scallop tray, and I was told it was just boiled kamote, milk and sugar.

I hope Stephanie’s will continue to delight visitors and locals alike with such generosity for a long time. For I learned that on Fridays, lechon de leche (roasted suckling pig) is added to the buffet, with a mere Php20 increase in the buffet price per head. I wasn’t in Tacloban long enough to partake of this. But in the words of Gen. Douglas McArthur right in the middle of WWII, I shall return.

Hello Kai, saan sa Tacloban yan? I was there last June but unfortunately I wasn't able to explore the city. Kasi I was just passing thru the airport on the way to Samar. I wish I can go back there soon.

Oops I forgot to include the address. Will update the post! It's just around downtown really.

there's steph too across Robinson's and the other is beside Bo's Coffee near DWU/St. Paul's hospital

Thanks Roxy, I think we went to the one near DWU/St. Paul's.