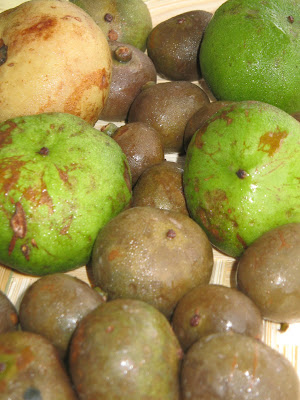 Batwan, pronounced BAT-WAN in the Hiligaynon language, is a common souring agent for soups in the specific ethno-linguistic area of Iloilo and the northern parts of Negros Occidental. It is also exclusively used in Ilonggo cooking in the Western Visayas, the fruit not available anywhere else.

I have heard that the tree has a high degree of difficulty taking root outside of the islands of Panay and Negros. Elsewhere in the country, transplanted Ilonggos (natives of Iloilo) and Negrenses (natives of Negros) use bottled batwan preserved in salt when cooking dishes native to their culture.

Batwan is alien to me, being a Pangasinense (a native of the province of Pangasinan, in the northwestern part of the island of Luzon). But I have seen the batwan fruit hanging from a tree growing by the roadside, as pointed out to me by friends and fellow travelers, during a trip traversing the mountains that separated the Occidental and Oriental portions of Negros. That had been my first trip to the island, in the summer of my college freshman year.

I encountered batwan only for the second time recently. But this time, I had the tremendous fortune of being gifted several pieces of the fruit for cooking, from a dear friend who shared from her fresh stash straight from the markets of Iloilo City. 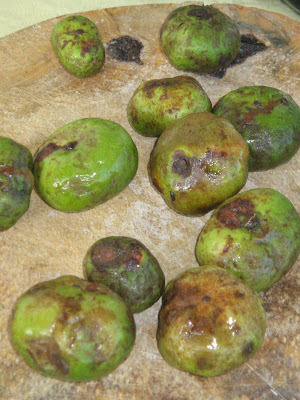 These were given to me smooth green without any blemishes, but I kept them in the ref until I found the time to cook them. A Bacolodnon friend advised that batwan had to be used fresh - while still green and firm - within three days after purchase from the market.

After about five days in the ref the batwan had brown spots, but still firm. I used them quartered in a sinigang (soured broth) with bangus (milkfish), tomatoes, ginger root and kamote tops, as instructed both by my benefactor and the Bacolodnon friend.

The soup was reminiscent of sinigang sa bayabas (guava soup), the batwan flesh starchy like gabi (taro), the seeds looking and tasting like mangosteen (to which it is related).

Batwan actually intrigued me, because it looked like a smaller, flattened siniguelas, with smoother, green skin and firm flesh. But what I found interesting was its mute smell - it didn't give off any scent - that belied its innate sourness, capable of bringing on puckered mouths and crinkled eyes from its tingling tartness.

Then I watched Namets, an entry to the 2008 Cinemalaya film festival at the Cultural Center of the Philippines, and a film celebrating food in Negros. There was a scene discussing batwan as a main ingredient in kansi, a Negrense dish made of tuhod ng baka (beef knees) and langka (green jackfruit).

My curiosity was perked, as I haven't come across this kansi. I told my benefactor to set some batwan aside for me when she gets another shipment. And wonderfully, right then and there I was given a small bagfull, in several sizes, and colors as well (first photo above).

I felt doubtful about the small brown pieces, which looked like flat chicos with shiny smooth skin. But friends from Bacolod to whom I sent photos of the batwan said they were okay to use, as long as they were still firm. And they added that batwan is also used for souring the Ilonggo specialty KBL, or kadios-baboy-langka, a dish of beans, pork and green jackfruit in soured broth.

But kadios is as hard to find in Metro Manila as the batwan. So I made kansi, with half a kilo beef shank bone-in, half a kilo green langka, a few slices of ginger root and some sliced bell peppers. I put the ginger and batwan with the beef in a pressure cooker half-filled with water, allowed it to cook for about an hour, then put in the langka and cooked for about 20 minutes more. 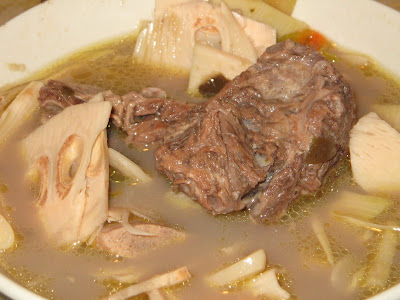 I made a mistake in not parboiling the langka before adding it to the kansi, which resulted in the vegetable being a bit chewier than expected, and it tasted slightly bitter. Green langka is not cooked as a vegetable in Pangasinan cuisine.

Nevertheless, the dish was stupendously, marvelously, delicious, a properly mouth-puckering beef sinigang to the nth degree, due to the long cooking that resulted in the soup fully infused with the flavors of the batwan.

Kansi is said to be a cross between a bulalo (beef shank in clear broth) - because of the use of marrowed beef bone - and sinigang (soured broth) - because of the sourness factor. For me it defines a new level of beef sinigang - the sourness not as acidulously pungent as the tamarind fruit (the common souring agent for meat soups) can make it, but with a certain sweet edge that's not so tangible, rather like an aftertaste. And not as teeth-numbing, too.

The batwan disintegrated from the long cooking, and it imparted the full extent of its sourness - no more guava hints this time. It is now my favorite souring agent for sinigang using meats.

I have to confess, though, that I have no way of knowing if my kansi is true to the original kansi of Bacolod. Wyatt, a Bacolod native, posted a recipe for kansi in his blog, which is a bit different from how I did mine. But I have a standing invitation from a friend in Bacolod to eat kansi cooked by his uncle, who reputedly makes a great one. I hope I can oblige soon.

kalad, i wish i can hoard up on this wonderful wonderful souring agent. was in iloilo last summer and kung hindi lang mag ta travel pa kami pa roxas at super bigat sa back pack, i would have lugged a sack of it. learned from my ilonggo sources that it is some low height tree which grows wild in the forests and under special conditions, clean environs maybe. but rose naman said pino propagate na ito ng local department of agriculture. hopefully, it will make appearance in manila markets soon.

Well, that would be the day!

Hi, Kai! Yours is an entertaining article about the dish we Negrenses have come to love.

Cansi graces just about any special occasion in Negros. Where there’s celebration, this dish is there.

We have it too often we’ve become unmindful it’s a significant regional creation, a masterpiece of a dish made best by Visayans (Sorry, Kai, I haven’t tried your version yet).

Cansi is so much an element of our provincial life you’d wonder if it sprung with the island from the bed of the sea. You can hear stories from my father about his family enjoying Cansi before the great storm of 1945 came and washed away their house.

The original Cansi houses here in Bacolod are not the luxurious eateries, having sprouted in the 1950’s to 60’s. They are like cafeterias, with wooden chairs and tables, their signboards now black with soot. You can find the best ones in Shopping Center, the original Binondo district of Bacolod City. Thatched carinderias along the highway north to south of the province serve good ones, too. If you could sacrifice the comfort, their dish is as good as ever.

My daily roadwork happens to take me along these old Cansi houses, and the smell of the dish late in the afternoons is very inviting. If I wouldn’t waste the effort running daily I wouldn’t be able to resist. As we all know having a great dish is sometimes sinful, and it so happens you take marrow more than you should when you have Cansi.

Well, everything should be in moderation, which goes for taking Cansi. Aside from health considerations, of course, taking it just occasionally may remind us Negrenses that Cansi is a lasting specialty of our island.

Well, that was a very informative comment replete with history, thank you very much. I do remember that in the movie Namets the protagonists ate cansi (so that's how it is spelled, sorry I mangled it by using the letter K - I know you'd undertand my bias for the letter) in a carinderia - just a bench, really, with a glassed in cabinet showcasing the cansi, the soup perpetually in a huge kaldero on top of a lighted stove. I'd love to try that, as it should be the original one, and I'd love to try your uncle's version, too!

Hmmm, okay, but that looks like sinigang na baka, hahaha. Can we spend Christmas at your place? ;-)

By the way, what is balatong? In the Pangasinan language the term balatong refers to monggo (mung beans), but I don't know if we are referring to the same thing.

hahaha i used to climbed our batwan tree in our farm.. the young tender leaves are good to eat too.. woow... i remember now how sour it is.. it's good for paksiw too... try kamias if there's no batwan..

hahahha.... i don't eat pork but i like batwan... i saw saw sa asin.. waaa ang sarap.. i think batwan grows anywhere in negros... we have that in the middle of our farm and we do picnic under the tree.. tapos my akyat kami and eat batwan.. at least eat something before eating it... natatawa ako sa isang post dito.. sabi.. nilulunod daw ang gulay... it's not nilulunod... nilalahok ata kasi pag nilulunod that means you're drowning it... well in a way there's a sense in it... you're drowning the vegetables in the batwan souppy soup... hahahah.. gleng mga tao dito.. sad to say late na me naka post...

That's a mice input, the young leaves of the batwan can be eaten, too. I wonder if it's added as a souring ingredient to sinigang?

We eat santol the same as your eating batwan in Negros. Molar-numbing.

I love "linaga" of Negros more than Cansi. It is stil the same as Cansi but the difference is the main ingredient that you use. Instead of "tiil ka baka", "unod naman" or laman ng baka. But anything with Batwan really is good. I think is best. We really love sour taste in food, especially in soup. God bless

Hmmm, the same as cansi but without the bones? Brint it on! But "linaga" sounds like "nilaga," which is boiled beef or pork with soup and vegetables, but without the souring ingredient. But yes, sourness in soup is great.

I don't think there's an English name, since it grows only in Southeast Asia.