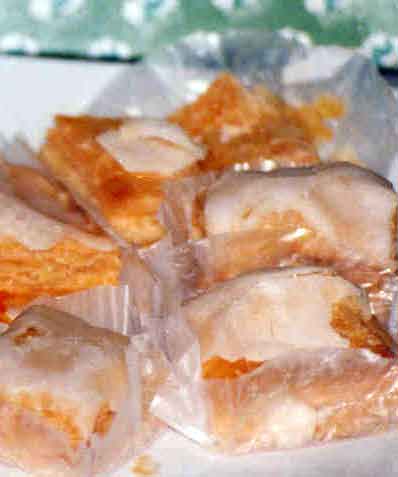 The region of Western Visayas is known for its genteel people, and for its malambing language, that it is often joked that you will never know when an Ilonggo is angry because of the inflection of the speech in Hiligaynon.
The Ilonggo culture is reveredly quaint, decidedly unique and entirely different from my own. This, of course, includes food. The Ilonggo sinigang is gentle (not so sour), and there is seafood not found elsewhere. How about lumpia which doesn't need a sauce? That's lumpiang ubod for you, Ilonggo made and unparalleled anywhere else.
The Ilonggo version of the Chinese siomai is eaten in a thick soup (molo), and roasted chicken has long been perfected and eaten before the Metro Manila phenomenon of lechon manok and Kenny Rogers (who, by the way, now includes an inasal flavor).
In pastries as well, only in Hiligaynon-speaking country can one find piaya, biscocho, hojaldres. And it is only in Bacolod, from among 7,103-4 islands, where napoleones is made.
Napoleones is a small, square, layered puff pastry with a sugar glaze on top and filled with a luscious custard cream in the center. It is sold in dozens by the box, each pastry in is own paper liner.
It is delectably light and airy yet filling at the same time, the glaze providing sweetness but can be cracked and peeled off if it proves too much.
Napoleones possibly was adapted from the napoleon, which is how the French pastry mille-fuille (a thousand leaves) is called outside of France, which in turn is claimed to have originated from Naples in Italy, thus the name.
It is in no way related to Napoleon Bonaparte, but there is a story that says he liked the napoleon so much that one time he ate a vast number of it before a major battle, which brought about Waterloo (I'm sure it is a joke).
Anyhow, the Bacolod napoleones approximates the French/Italian napoleon very well, only that the napoleon has many variants (fruit jams can be used as filling instead of custard cream).
However, the best known napoleon is the custard variety. In Bacolod, napoleones is filled only with custard cream.
And a very good custard cream it is. Creamier than Bavarian filling, thicker, too, and viscuously so. The puff pastry is first rate, with the right balance of crisp and chewiness.
Of course when I say Bacolod napoleones I'm talking about Roli's napoleones, reputedly the best known in taste. Roli's was a parting gift from an Ilongga amiga the first time I went to Bacolod, and invariably, Roli's napoleones is what I get when Ilonggo friends come over (I'm just so lucky I have many friends from the area), or what other friends bring me when they go to Bacolod for a visit (of course with a little hint from me).
I've heard there are other pastry shops selling napoleones in Bacolod, but Roli's has been the most consistently scrumptious. Sales is brisk, and there are days when you walk in the shop in the afternoon to find not even a single napoleones, and would need to order for the next day.
Unfortunately, Roli's, as with other special regional delicacies, is available only in Bacolod. The Ilonggo Grill outlets in food centers and food courts in malls sometimes carry a napoleones or two, but these would be soggy and a little stale.
Fortunately, though, for those who, like me, shouldn't always depend on the generosity of friends, napoleones is now available in Metro Manila. Although it is not made by Roli's, it is a good enough substitute. At least until that next box of Roli's comes along. 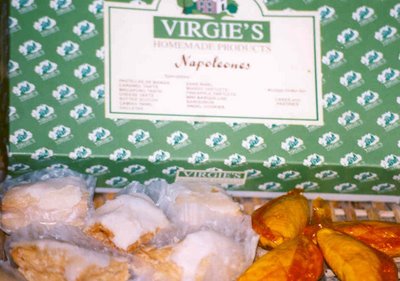 The napoleones available in the metropolis is made by Virgie's Products, who has grown by leaps and bounds from its acquisition by BongBong (the "in" piaya now in Bacolod). Virgie's Products, like mango tarts, mango tartlets (pañolitos), meringues, barquillos, are now distributed across the country and can be found in most mall supermarkets (SM, Rustan's, Market!Market!) and in regional kiosks nowadays.
Virgie's napoleones, however, can only be found at Putong Ube. This is the food kiosk found in malls sporting a purple and yellow banner, selling puto by the box in cheese, pandan, and of course, ube, flavors.
Putong Ube also has its own commercial spaces along Gilmore Street and Katipunan Avenue in Quezon City, Libertad Street in Mandaluyong, President's Avenue in Paranaque, and in Greenhills and Tiendesitas. It also sets up shop in the Salcedo Saturday market.
I don't care much about their puto. They're very tasty, but they get hard as a rock the following day - no amount of steaming can soften them again. And their texture is rough as a liha (sanding pad) compared to Calasiao puto, which, being a Pangasinense, is how puto should be, and only be, for me.
Of course it's obvious why I've taken painstaking note of their locations. I know where to go when the napoleones bug hits me.

*Update: A commenter very kindly dropped a note in the comments section with the information that Roli's is actually available at the Building A of SM Megamall in Ortigas City. Thanks, C!
(2/25/07) An anonymous commenter indicated that Roli's is also available at The Block, SM City North EDSA. Thanks for the info!

Roli's Napoleons has a stall at the first level of Bldg A of SM Megamall, near Pollo Loco :-)

Really! Thanks for that info, C!

c is right. i've bought a box of the stuff from SM Megamall (it's just a small kiosk) and i believe it costs P90 for six pieces... and the taste is the same as the one from bacolod.

they make the napoleones here in Manila, so i don't think these were flown pa from bacolod

as for the puto, i must suggest PUTO MANAPLA: they're the soft, sweet, anise-flavored, medium-sized ones that have banana leaves on their base. They originated from Manapla town, north of Bacolod.

they're available in ilonggo restos like bacolod chicken inasal. they go well with dinuguan and pansit luglog. In bacolod, we order these from one of the homekitchens in one of the subdivisions and they're packed cheek-to-cheek. They stay great for like two weeks in the ref, and they return to their soft consistency when steamed in a rice cooker. I usually put cheeze in the middle and butter with a sprinkling of black pepper or sliver of pimiento on top. A fantastic merienda!

hmmm... this would be a nice thing for you to feature next.

Thanks, Julsitos, I'm scheduling a trip to Megamall. Good thing they make them in Manila. I hope they expand soon and sell in other locations.

As for the manapla, yes, I've had it, and it is heavenly when hot. But I've never tried it with pepper - that's quite intriguing. It's a perfect accompaniment for batchoy, no? Sarap! I'll be on the lookout for it!

* Pala-pala (seafood bagsakan) behind the Cathedral
* Drive to Silay for El Ideal (I hope it is still there) - Some 25 odd years ago, homemade stuff were great there. They even made their own Sarsaparilla (rootbeer).
* Aboy's near the airport. Little known fact: It is owned by Kapangpangans, not local Bacolodnons. That's great cooking with the best local components.
* Pasta at Carlo Restaurante Italliano. There's one in San Juan. I hope too that they have not closed it down.
* kalamay; I don't know where it is sourced.
* Diwal, shell fish from Dumaguete (I think)
* Mulberry that is used to feed Bago's silkworms
* Magoes, of course. The Guimaras Mangoes planted in Bacolod are just as good as the ones in the nearby island. It may even be better because Bacolod soil has more volcanic content.

Tips for ordering at the now world-famous Manukan Country:
* The food is not pre-cooked. Place an order for more than 1 pc right away. Additional orders take a long time to cook.
* While waiting for your fowl, order sweet oysters and beer.
When the food finally arrives, you'll swear that it was worth the wait.

There's another Roli's stall at The Block in SM City North Edsa.

Thanks for the tip!

Wow, bogchimash, thanks a lot, I think I need to visit Bacolod City very soon!

This is a late reaction, but I did try the napoleones at Megamall and was disappointed. They were old and makunat. This is sad, casting a bad stain on Roli's. Did you say they were made in Manila?

I'll just buy in Bacolod. I heard a blockmate of mine is getting married soon. In Bacolod. I'm raring to go!

The Napoleones of Roli's in Manila are just made here by the grandson of the original Roli's owner. Infact, the one from Bacolod comes from his mother's kitchen. Hope this will reach my cousin to improve on his Napoleones venture here.

Hi, I'm Gil and I am now in Manila, but I am really from Bacolod. I suggest that if you visit our place, you should try my mother's home made napoleones.

Although it may seem bias, I think that her recipe is the best! It tastes great because of its crispness and freshly baked goodness. It only costs around 10php per piece just like any other. You may contact Nanay Leony at 09168536295. :)

There's also a Roli's stall in Market Market! It's close to the main entrance, in the middle of the corridor leading to the atrium. Bought 2 boxes...everyone who tasted the napoleones thought they were heavenly. =)

So delicious and addicting!