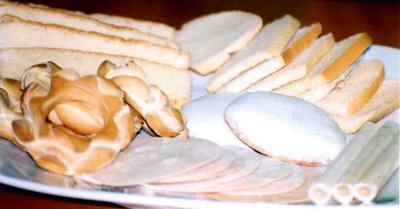 This is part of a series, "Tinapay," on local breads from street corner bakeries across the Philippines.

When an office colleague went home to Bacolod City for the Holy Week I asked her to bring me the representative local bread/s in the region. I expected Wewyn's sweet biscocho, which I was able to buy and enjoy for myself more than ten years ago, or the famous flat (as opposed to the bulging) piayas, and maybe some butterscotch bars.
I was surprised, though, to receive a box of assorted goodies, from the Panaderia de Molo in Iloilo City. But then after some pondering I thought it wasn't really such a surprising idea, since Iloilo and Bacolod both share the same Hiligaynon language and food culture.
The surprise is in the fact that Panaderia de Molo should be considered the prime makers of Ilonggo treats, both in the cities of Iloilo and Bacolod. Not that I have a problem with the quality of the products - no, I think they're unsurpassed, although of course I'm not a real authority on Ilonggo food.
Probably because Panaderia de Molo was the pioneering institution in making the now famous and distinctively Ilonggo bakery goodies. It traces its roots to the Spanish colonial times, when there was a boom in church-building activities.
Historical data reveal that construction of churches used crates and crates of eggs as binder for the limestone blocks, but utilising only the whites. It is stated in Panaderia de Molo's wrapping paper that the bakery traces its roots to an order of nuns in the district of Molo in Iloilo City who thought of a way to make use of the surplus yolks from the construction of the Molo cathedral.
It is even claimed that the nuns' recipes, perfected and closely guarded by the family who eventually set up Panaderia de Molo in the second decade of the 20th century, and even the wood-fire baking and manual packing methods are still used today.
Panaderia de Molo's assorted biscuits are packaged in either the tin round cans or in small boxes, with the various biscuits packed in individual plastic packs.
Kinihad are thin slices of toasted bread, great for dipping into coffee or hot chocolate, and would benefit greatly from a spread of sweet jam and butter. They are like biscochos without the baked in butter and sugar on top.
Bañadas are soft round cookies glazed with sugar icing, which reminds me of something similar in Pangasinan, and which made the late food doyen Doreen Fernandez wax sentimental over the local bakery treats in her hometown of Silay City.
Of course who doesn't know barquillos, called apas elsewhere (but is different from the thin apas of the Tagalog region), the long tubes of rolled wafer-thin biscuits of our childhood that have evolved into the present chocolate-marbled and -filled Stikkos? This barquillo was coconut-flavored, and it was delicious without cloyingly sweet. It ranks among my other barquillo favorites - the ube and pandan flavored ones from Biscocho Hauz, also in Iloilo City.
Panaderia de Molo's galletas are one of a kind - not like the dry, chalky Luzon galletas that are choking hazards - they are crispy, thin as an unrolled barquillo, and more like a crunchy communion host. Very close to the apas of the Southern Tagalog region, but with the characteristic chalky taste.
Kinamonsil ape the shape of a kamonsil or camachile (Pithecellobium dulce, known among international tropical plant enthusiasts as Manila Tamarind) with its decorative form. I rather like my province's own camachile biscuit, though, as it is not as hard and sweeter.
The one I like best among the lot, besides the hojaldres which are not in the photo and are akin to otap but are not as flaky and softer, are easily the biscocho prinsipe. I like Ilonggo biscocho (and not the Ilocano biscocho), but I love biscocho prinsipe. The qualification prinsipe (prince) is a deserving adjective - it is indeed a royal biscuit. It isn't even a biscocho, it is more like a slice of dried butter pound cake - crumbly, buttery sweet, finger-licking good. It needs nothing else.

wow, i like all those especially the barquillos. I used to consume a lot as my sister-in-law from Bohol used to give us packages from that well known panaderia de molo.

ahh, panaderia de molo-one iloilo bakery that is steeped in history. good to know that the person who took over the operations is also a cultural activist who works to revive early (folk) ilonggo and and traditions.

they still use the original methods in baking these spanish inspired delicacies .

melt in the mouth hojaldres is my favorite too.

panaderia de molo...evokes memories of hometown breads. of course, i learned of this bakery from my idol, doreen fernandez. i always drop by there in the rare instances im in iloilo city. their kinihad teams well with the pancit efuven of biscocho house. sarap nito kalad ;-)

yup their HOJALDRES is very good. very flaky, brittle and addicting.i also love the ROSQUETES biscuit made from RICE FLOUR.

also the PIAYA of Panaderia de Moloare good too.they are very crisp contrary to most piayas.i can finish a single pack in5 minutes lol

I missed the piaya. I'm starting to like piaya from the old bakeries, got tired of the new ones ;-)