Iloilo in 24: A Breakthrough Dinner 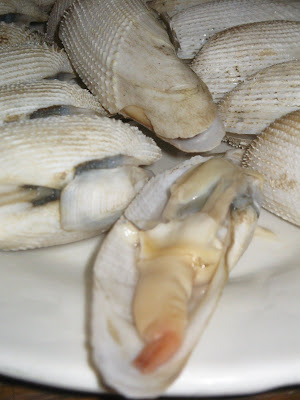 [Diwal on the shell]
The last two times I had been in Iloilo, the default dinner place had been at Breakthrough, a seafood house along the beach in the outskirts of the city, courtesy of Ilonggo friends.

This trip was no exception, courtesy of the family of a colleague who are native Ilonggos.

It would have been nice to dine there during the daytime, for the seaside view and the breeze. Friends and I once had lunch at default inasal place Tatoy's, which is directly across Guimaras island and by the same stretch of beach as Breakthrough's. It had been nice burrowing toes in the sand and watching people ferry to and from Guimaras while waiting for our orders to cook. 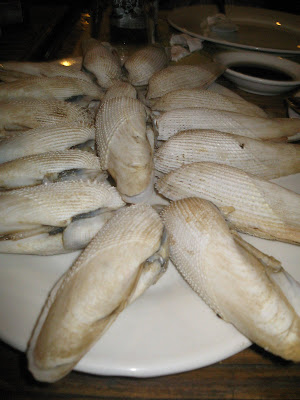 [Roasted diwal, or angelwing clam, Pholas orientales]
At Breakthrough, the waves breaking through the beach was a constant presence, though only in the auditory sense. I wondered why no lamps had been hung outside the restaurant, to illuminate the sea. As it was, you'd forget you were so close to the water dining there in the evenings, as outside the bamboo rails of the open air restaurant everything was jet black. Not even the seafoam was visible.

Nonetheless, it has always been a satisfying experience eating at Breakthrough. Fresh seafood, expert cooking, fast service, convivial atmosphere, and an extremely relaxed ambience make for a fine meal. And Breakthrough showcases the best that the seas around Western Visayas can offer. 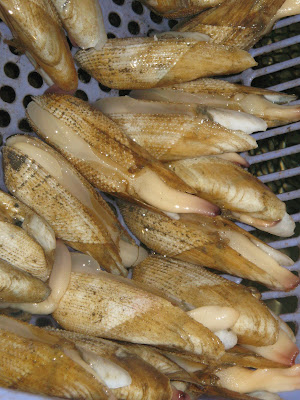 [Live diwal just out of the water]
There were no diwal at the public market when I went there hours before dinner. It reportedly sells for Php350 per kilo, which is a hefty price for seashells. But baskets of them, live, were lying at the bottom of Breakthrough's water "well." Inclusive of cooking and serving charges, the price was a lot more steeper at Php750 per kilo. We had them simply grilled, without any sauce of any kind (they're usually served slathered with garlic and butter) to fully appreciate their briny sweetness.

I've had diwal before, during my first trip to Iloilo in the early 1990s. They were served at the home of a friend, and at the time diwal was as common as ordinary clams. They disappeared afterwards, and it is only now that they are slowly making a comeback. 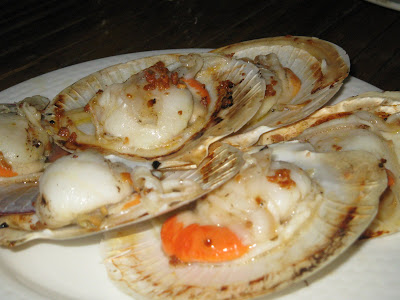 Plump and juicy, very sweet, very fresh scallops, with fried garlic and butter. To die for. 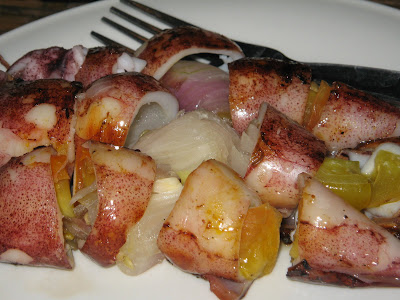 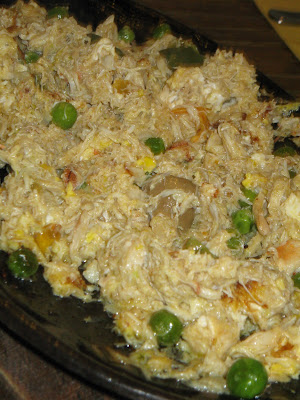 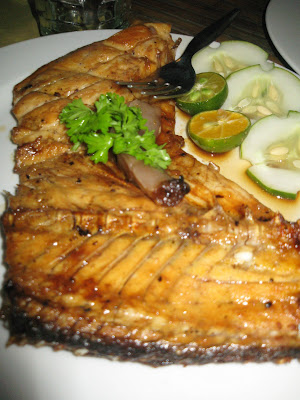 yet another ILOILO institution

its probably the first resto locals would bring their guests to have a taste of iloilo. often regarded as a spin off of TATOYS, Breakthrough slowly but surelt carved aniche of its own.

and yes! its the ambiance that made it past tatoy's in some ways.lunchtime is the best time to be there since youcan stroll along the beach while waiting for your order.though the beach is public and not so clean anymore, theview is great.

they also have this very good inland shrimp/lobster namend intsik intsik.they also served good lechon baboy. but their lechon manok is not good.
tatoy's is still the litson manok king. and i love their scallops better since their are unusually BIG and has calamansi mixed in the butter garlic sauce.

Breakthrough triumvirate - ordered like a true-blue Ilonggo! Overlooked that intsik-intsik. And yes, I love Tatoy's inasal, I wish it were the inasal place expanding with numerous outlets all over the country instead of Mang Inasal. Miss it so.

LOL i also dont like Mang Inasal that much though much better na sya compared to the first time i tried it.
anyway contrary to what you said, Tatoy's chciken is not an inasal so to speak, it's just lechon manok. but yes masarap sya kasi native na manok tapos medyo tough sya.
hahah puro tatoy's na dito ang pinag uusapan.

Oh ok thanks for pointing that out. I like the Tatoy's chicken flavor much more than any inasal! ;-)