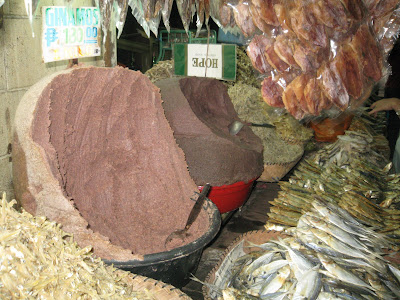 I went to Iloilo on a Thursday. I arrived mid-morning, proceeded to the office, and was done by mid-afternoon. I had a morning flight the next day, and even though it wasn't very early, I had to consider the travel time to the airport, which was about 30-45 minutes away from the city, and the required check-in time of the airline.

So the best time for me to check the public market was on Thursday afternoon. It didn't seem to be market day (I forgot to ask when), as there were very few ambulant and semi-stationary (those seated with goodies spread on the pavement or heaped on bilaos) vendors, though all the leased stalls were open.

The wet market was also open, but only one line of stalls were occupied. I didn't see any meats, just seafood, and nothing extraodinary was being sold, just your usual marine staples (lapu-lapu, samaral, parrotfish, bisugo, tuna, shrimp, squid, etc.). No seashells, too, so no diwal (a kind of angelwing clam, Pholas orientales) sighting for me.

The dried fish and seafood section was like any other daing place in the country - heaped with danggit, squid, dilis (anchovy), tuyo, etc., though considerably lower in prices. But what immediately caught my eye were these mounds of salted fermented krill, guinamos, in varying hues of pink, lilac, brown (photo above).

As you buy, the mound is scraped downwards, from the front, so the result looks like a piece of hill that has been quarried.

This was interesting for me. I come from the land of bagoong and alamang, and salted fermented anchovies and salted fermented krill are permanent fixtures of Pangasinan public markets. But ours are of the wet kind - the resulting brine from the salting process is an integral part of these condiments, and they are sold in deep bins. It looks like in Iloilo, guinamos is strained of its brine after fermentation. 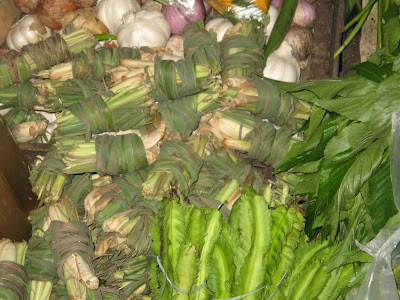 The importance of tanglad - lemongrass - in Ilonggo cooking is evidenced by the proliferation of the aromatic stalks across the market, all bunched up and ready to stuff into chicken inasal, or drop into the cooking sauce. 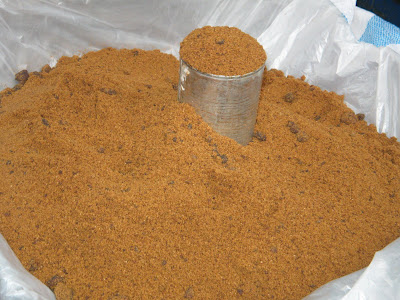 Kalamay - muscovado sugar - the sugar cane "grits" or powder before they are processed into sugar crystals. Used in kakanin (concoctions of rice cooked in coconut cream), but can also be used like ordinary sugar. Dry sugar in its most unrefined form. Php15 per small can (about 1 1/2 cups). 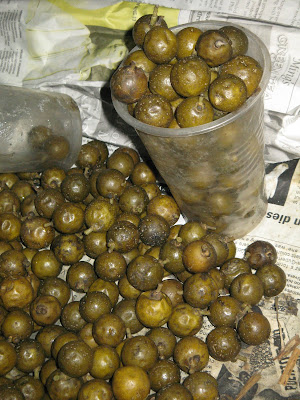 I consider as my greatest discovery this budyawe, fruits of the buri palm* (Corypha Elata Roxb.), which I've never tasted before. They are similar to the unripe aratiles fruit in color and size, but they are sold boiled, at Php10 per measure of a tall plastic cup.

A measure is quite a handful, as these are tiny fruits. In photo below, they are shown sitting in a Chinese soup spoon. 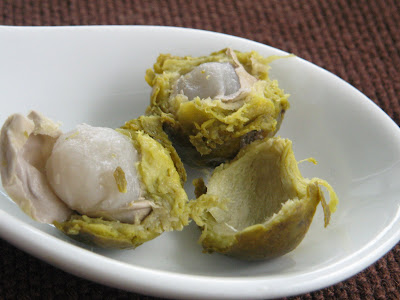 The outer cover is fibrous, but the fruit inside is white and chewy - very, very fun to pop out and chew. It has the texture of a slightly undercooked sago (pith palm pearls, or "bubbles") so is slightly unyielding, with the subtle flavor of water chestnuts, or even toge.

*Further research suggests that budyawe, or budjawe, is not actually the fruit of the buri palm, but of the anahaw, a main source of nipa hut roofing material.

Kai,
Is that "budyawe" called "abiyang" in Pangasinan dialect? I used to eat that when I was a kid, but I don't like the tart taste in the middle of the fruit but the white meat taste like buko. We used to eat it fresh not boiled.

Hi, Bert, oldie Pangasinenses confirm that the "budyawe" is the "abiyang" in Pangasinan, and they also said there is a bitter part in the middle. The "budyawe" I ate, though, did not have any hard or bitter or tart middle part, and they were edible through and through. And yes, they tasted like buko.

Maybe the boiling took away that center?

Hahaha, you mean I beat a native Ilonggo in locating budjawe in the Iloilo market? Must have really been a lucky day for me, with the Queen siopao at Roberto's and all!

Sure, go ahead, you can use the photo.