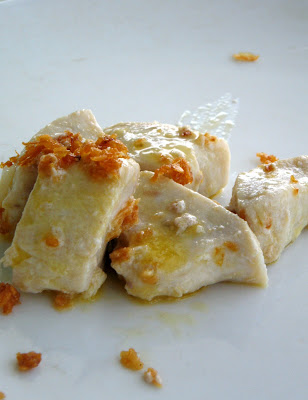 [Steamed Blue Marlin with fried garlic and lemon-butter]
The Puerto Princesa wet market is a study in the abundance and variety hoarded by the Sulu Sea, and even the South China Sea. It is a cornucopia of the bounty of the seas, from shells, to edible sea creatures, and of course, marine fish from the deep.

Starting at about three o'clock every afternoon, the day's catch start streaming in. The variety is also a study in contrasts - there are tiny, three-inch sardines and galunggong (round scad) at Php20/kg, baby octopi (Php50/kg), medium-sized albacore (Php110/kg) and dorado (dourade) selling for Php60/kg, and hefty giants like blue marlin (Php180/kg) and pinya-pinya (local cod) at Php150/kg, chopped so they can be displayed on the tiled stalls. 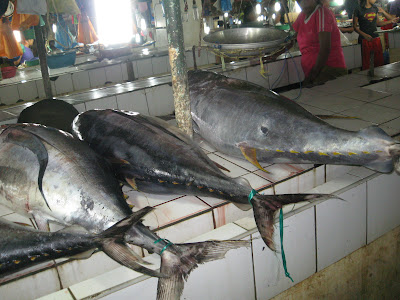 [Twelve-kilogram Yellowfin Tuna]
And the colors, too - what a sight! - nothing could be so vivid as having been out of the sea only a few hours before. The pelagic fish are in the characteristic silver that we have come to expect from fish that we eat, but their sheen so clearly intense to the point of being dazzling. Palawan is in the Viasayas area, and medium-sized fish sport tropical colors so bright and varied that the entire market could be a canvass of Kurosawa's dreams.

There are burgundy-spotted blowfish, eels striped with lemon-yellow alternating with electric black, siganid (samaral, spinefoot or rabbitfish) dotted with sunshine orange, parrotfish screaming with the colors of the bird they are named after. The local gindara (silver cod) is caped in black with a pineapple-like pattern of yellow "eyes," the lapu-lapu (grouper) in gorgeous reds and browns and slinky leopard black and jaguar patterns.

I could go on, but fish for me is not purely for viewing, and it's not much fun watching fish lying inert on white tiles. So I got whatever I could lay my hands on, going back to the market every two days to try other varities, and froze twelve kilos worth to bring back home.

I bought the panga (translated as jaw, literally, but refers to the whole head) and the belly of the largest one (male) from among the yellowfins above. Cleaned and de-gutted, I had nearly seven kilos of flesh from freshly caught tuna. At Php110 per kilo, it was slightly more expensive than the Php100 selling rate at Citramina, a chain of stores selling all kinds of tuna products. But it wasn't frozen, I saw what the entire fish looked like and got to watch as it was cut up.

We grilled the tuna rubbed with sea salt in several batches, dipping it in lasuna-spiked vinegar and soy sauce. Bronzed on the outside and moist and smoking inside, it was so good eaten with bare fingers so you could poke in and around the bony head.

I wanted to buy one whole local gindara and grill it, too, brushing with some teriyaki marinade, and jumping up and away every time (which is about every five seconds or so) the grill bursts into flame. But the husband forbade me to. He didn't like what the fish does to one's system (Xenical-like side effects), even though the fish is one of the most delicious in all the world. He would be the one carrying it for me, so I couldn't force it on him, and longingly left the gindara. 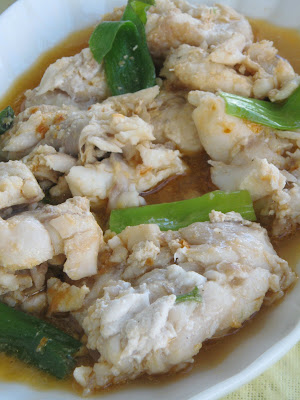 [Steamed Lapu-Lapu Fillets]
The best way to eat blue marlin, for me, is cut in thick slices, steamed then salted, dressed lightly with melted butter mixed with lemon juice, and sprinkled with garlic finely pounded and fried to a crisp. The white flesh is lusciously creamy without any hint of lansa (fishy taste), the minimal dressing only serving to enhance the taste and round-up the flavors. Simply delicious.

I also like lapu-lapu steamed. I love the steamed lapu-lapu served in Chinese restaurants that for years I have been trying to approximate it. In Puerto Princesa I bought a four-kilogram black grouper and had it filleted. The head and tail part we fried and dressed with vinegar-based sweet-and-sour sauce.

I steamed half of the fillets in a ceramic pan, saving the resulting fish stock. Then I heated some sesame oil in a pan and put in sliced leeks, and mixed in the fillets along with some stock. A dash of salt and pepper and a drop of chili oil for color and aroma, and it was done. Not exactly like the Chinese steamed lapu-lapu, but it was close, and quite delectable. A portion of the fillets was made into fish nuggets for the kids, and the last portion was added in a chowder-like seafood soup. 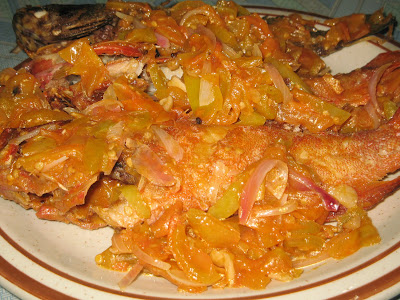 [Fried Lapu-Lapu with sauteed tomatoes]
Three pieces of red and tiger (spotted with brownish-black) lapu-lapu, each about a foot long, weighed about 420 grams, and the cost (Php38) nearly drove me insane (maloka-loka ako). These were pan fried then put in an escabeche. Escabeche in Pangasinan is a "peasant's dish" - pan-fried fish mixed with sauteed tomatoes until the orange juices have seeped into the fish. It is always a wonderful way to eat fish, the flavors melding into a depth surprising in a dish considered poor man's fare. It lends well to any kind of fish, but it is perfect with lapu-lapu because of its neutral taste. 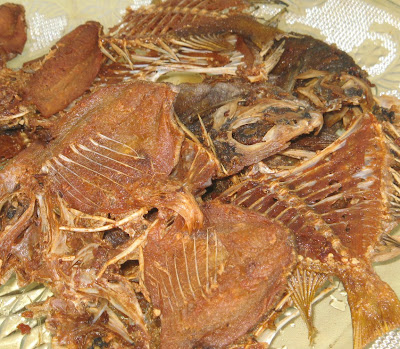 [Fried Lamayong Danggit]
We enjoyed fresh big samaral in sinigang (soured soups). I was hunting for daing na danggit (sun-dried small rabbitfish), but the only ones available were of the day-old drying kind. I avoid one-day dried danggit because it still retains a lot of moisture, so they weigh more and you get less fish, and there is the big risk of finding white little worms on the daing several days after.

The next best thing was the lamayong danggit. As explained by the locals, lamayo (accent on the last syllable) is the term for anything butterflied or flayed and marinated in vinegar, garlic and peppercorns, or dinaing (or in Pangasinan, pinindar), as opposed to daing, which is just flayed and salted, then sun-dried.

Lamayo tastes actually better than daing, but marinated fish has to be frozen and lasts only a few days, while daing can last for years if stored properly. And anyhow, the fish used for lamayong danggit is samaral (siganid) while the daing version uses danggit, which are of the same family species but are worlds apart in taste.

The samaral is distinguished by dots/stripes/vermiculations in iridiscent colors (usually orange), large and thick with flesh, while the danggit is usually silver-gray, very thin, with black or yellowish dots and are smaller. The samaral is valued around the world because of its white flesh and rich flavor, and we Pangasinenses love it so (we call it malaga) that we culture it in brackish ponds. The danggit is so malansa it can only be eaten salted and dried.

The lamayong danggit I got from Puerto Princesa was flayed with the spines separated whole. We fried the whole lot, and found that the "skeleton," including the head, was crispy enough to eat. The lamayo had been frozen for about three days before I remembered to cook it so the flesh had absorbed the marinade well. It was zesty with the garlic and vinegar, yet still silkily creamy.

When we talk about our Palawan trip my husband always waxes poetic about the lamayong danggit. I think I should marinate malaga one of these days.

Yes. Lamayo is better than dried fish. Our Lamayo is dried just a few hours (half day) so it's chewy vs the dried fish (whole day). Flavors are concentrated.

Wyatt, the lamayong danggit was sold in plastic packs with a lot of marinade, and I didn't take out the fish up to the last minute prior to frying. Yummy!

Ut-man, I forgot to make anyting into a kinilaw! Well, probably because it's mainly a male thing, kinilaw being more popular as pulutan. But there were twelve males in our group, and I can't say that they didn't drink....Hmmmm....

you are one lucky girl...you are just one boat away from puerto princesa :-)

everytime i go to palawan it's either for snorkelling and swimming. i should enjoy more the culinary side :-)

Thank you for the informative series on the different kinds of sea life and seafood.

Hi Dhanggit, I find the coral life and shallow reef fish in Palawan a little bit lacking, so I snorkel somewhere else. But I enjoy the green ambience immensely, and the food, of course. ;-)

Hi, TS, this was just supposed to be a project for Gay's To market to market event, and also a documentation of our Puerto trip, but found it fun. I love markets!