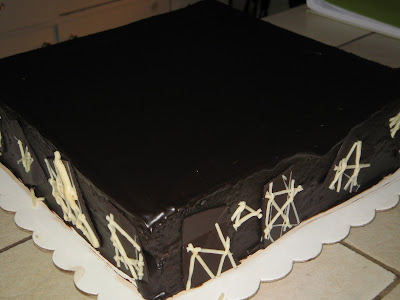 As the family marks my third child’s progress onto her first year, I will be celebrating her monthly birth day in this blog by featuring a cake. Lined up for the next twelve months, and hopefully on afterwards, are old-time favorites, reliable standards, as well as new discoveries, as I go on a quest for the best cakes around.

I feel it is not quite right to be starting this series with a chocolate cake (and down the line there are several more!), because I have several biases against chocolate cakes. Despite being a chocolate fiend, I am not much enamored with chocolate that has been turned into a cake.

And, well, I have eaten lots and lots of bad, as in really baaaad, chocolate cakes - parchingly dry, sickeningly sweet, tastes of fake vanilla flavoring that I suspect it's full of brown food coloring - that I have decided chocolate is not for cakes, or cakes should not be chocolate.

I also grew up associating cakes with the nice, girly things, and because of that cakes should be white for me, not dark.

But why am I featuring a chocolate cake?

First of all, the family found itself whisked all of a sudden to Puerto Princesa, the country's cleanest and greenest city at the southeastern portion of the province of Palawan, which is in southwestern Philippines (by the way, if you haven't noticed my campaign in the side bar, please go there before continuing to read this - the Philippines has THREE nominated spots to the New 7 Wonders of Nature, two of them in Palawan, and we need you to vote!).

Our stay in Puerto Princesa extended to more than two weeks. My infant daughter marked her birth day in the month of April there, so I had to source a local cake.

Though I had been to Palawan many times, it was only my second visit to Puerto Princesa. Needless to say, I didn't know the city well, much less was intimate with its cakes. But I welcomed the chance (embraced it, actually) to try a Puerto Princesa cake.

Consultations with Palaweňo friends and acquaintances yielded only one recommendation: Divine Sweets Cakes and Pastries. Not one of Manila's cake chains is present (I would not have bought from them, anyway), which is a good thing for me, as the local foodscape is preserved (no Manila restaurants, too).

And lo and behold, the Divine Sweets staff had only one recommendation as well, when I asked what they would offer an out-of-towner who wanted to taste the best cake Puerto Princesa has.

I didn't have a choice - I didn't know any other cakeshop around. So I carted off the heavy cake. It was actually heavy, literally. When it was handed to me I went like those barkada in the overloaded pizza commercial - its heaviness made my hand extend out down to the floor that I almost dropped it. Maybe that was what the waitress meant.

The family tagged along to Puerto Princesa with a unit of my husband's agency, and the entire outfit consisted of twelve males. With me, my kids' nanny, and the mother of my husband's colleague who also tagged along - all in all there were fifteen adults, majority of them males, and two kids, to share the cake.

The cake was a measly 10x10x3 (Php650, junior size round Php330, slice Php60) - bigger sizes had to be pre-ordered two days before, and I was buying on the day of the party. So I worried that it was not enough for everybody, especially given my husband's penchant for inviting everybody else in the neighborhood, or whoever happens to be in the neighborhood.

The Divine Sweets staff assured me the cake was enough, to which I raised my eyebrows in disbelief. I just silently prayed that men didn't like chocolate cakes.

It turns out they did. They even had second helpings.

The cake lasted for two days. Not because it wasn't good that we couldn't finish it. It was divine, and we licked the ganache smeared on the cake board. It was so heavy - heavily chocolatey - and so rich that we only had to cut small square slices for each. But it was so good that in no time at all everybody was cutting another slice. And the following day all that was in everybody's minds was to have another cut.

Divine Chocolate Cake is a two-layered chocolate cake with caramel filling in between, enveloped in a dark chocolate ganache and embellished with shards of white chocolate-marbled chocolate thins. It is more chocolate than cake that it is almost like biting into a dark chocolate bar. Yet the crumb is surprisingly soft, spongy, springy. But it is so dark, the sweetness just a whisper.

This cake, for me, puts the rest of all chocolate cakes to shame. No scrimping - that's so apparent - using the finest ingredients, and made lovingly. It's moister than moist, heavier than heavy. It deserves its divine name.

If only I hadn't already bought ten rainmakers and twelve kilos' worth of fresh pelagic fish that made the husband's eyebrows turn into one bushy straight line, I would have bought another cake - make it two - to bring back home to savor. I'm seriously considering buying a franchise to put up a branch in Cavite City, so I could have a taste of divinity anytime.

Divine Sweets Cakes and Pastries
Valencia Street, Puerto Princesa City
(right behind Mendez Park, and beside the Dockers/Adidas/Levi's/Bench/Human group of stores at the corner of Valencia Street and Rizal Avenue)

*The tiramisu is also great!

Wow!! cake of month divine chocolate cake. Divine Chocolate Cake is a two-layered chocolate cake with caramel filling in between, enveloped in a dark chocolate ganache and embellished with shards of white chocolate-marbled chocolate thins.