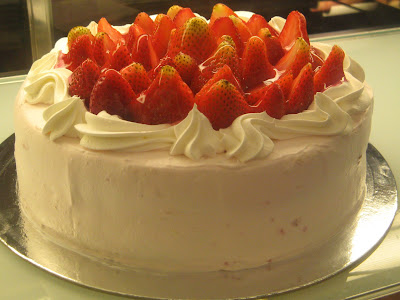 As the family marks my third child’s progress onto her first year, I will be celebrating her monthly birth day in this blog by featuring a cake. Lined up for the next twelve months, and hopefully on afterwards, are old-time favorites, reliable standards, as well as new discoveries, as I go on a quest for the best cakes around the country.

The family and I had the same plans as everybody else on the planet, even the Philippines' first family, during the holiday season, which was to spend at least a part of the whooping 11-day Christmas vacation in the country's summer capital. Yeah, it wasn't summer yet, but it was an astounding chance to experience the chills of December in the mountain city.

The newspapers were reporting that Benguet temperatures were running 13 degrees Centigrade a few days before the start of the long holiday, and even lower in the vegetable-growing towns. But by the time we got to Baguio City it was so crowded with people it was as if we were in Manila. In fact it was colder in Manila, with all the people gone, all rowing at the Burnham Park lagoon.

It was so crowded we had to harden our hearts and put a damper on the kids' enjoyment - no, no biking, no, no playground, no, no horse-back riding - it was that or we risked losing them. And we took to taking meals at odd hours, because if you arrived on the usual hours you'd be greeted with Ma'am, pangsampu na po kayo sa listahan ("Ma'am you're 10th on the waiting list"), along with a sad face if it was a restaurant where the waiters knew me.

But the baby has developed a fixed internal clock for mealtimes, at so early an age, so along with the various nibbles I brought on the trip from Christmas feast left-overs, we scouted for other eatables in new places and had endless family picnics in parks. We even had enough to share. So for all carollers and beggars rounding the parks we offered food, and it was like a grand, free-for-all holiday picnic.

The baby also has the penchant for celebrating her monthly birth days out of town, during our unplanned vacations, and so this time she had a strawberry shortcake topped full of fresh Baguio strawberries, made by a CCA-trained Baguio chef.

My two older kids requested strawberry cakes this year, I don't know for what particular reason, but I had disappointed them since strawberries were not in season during their birthdays. All specialty cakeshops and bakeshops I had called offered substitutes, which were unacceptable to preschoolers. So I made up for this gross negligence with the strawberry shortcake - a real Christmas treat, because I had told the kids the strawberry season is in summer, and they had been counting the days til then.

When I knew we'd be in Baguio for the baby's birth day I was actually in a panic, because I don't remember ever seeing any cakeshop along the city's major routes. Unless we went to all the hotels and sampled every cafe for a respectable cake. In Baguio we ate fresh vegetables and cinnamon-scented bread, and drank hot chocolate. But cakes? No.

But right where we parked along Session Road on the way to mass at the cathedral, I saw this new restaurant, Vizco's, with the label cake shop, and an enticing photo of a strawberry shortcake. I prayed hard they'd have that cake available - fresh strawberries were already being sold along the streets, although at tourist prices.

It was our luck that not only was it available, it was also the best-selling cake ever since the restaurant opened. Vizco's looks like it was set up to rival pioneer Don Henrico's, and it is even located adjacent to the pizza-pasta veteran. Right now I couldn't give judgement on that yet, since I only went there for the cake. But I think the cake line gives it a distinct advantage.

It turns out Vizco's has been operating for five years now (I wonder why I never noticed it before). The menu looks promising, a refreshing breather from those of my usual haunts. 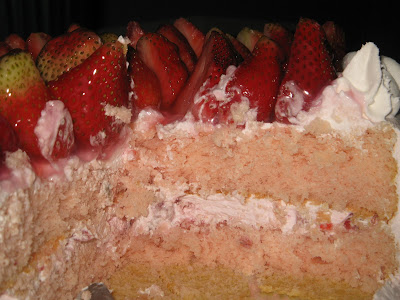 And the cake was smashing. Strawberry chiffon, strawberry-flavored filling and icing, and fresh local strawberries with strawberry glaze as topping, plus a whimsical piping of whipped cream. The chiffon was so soft I wanted to cuddle it. It was fragrant besides, and it was sweetened with a light hand, enhancing the natural sweetness and acidity of the fruit just so.

This cake was a joy to eat, so apt for the ambience, and showcases resources and talent harbored by the city of pines. And it's pink all throughout, perfect for a girly-girl, which my two daughters are turning out to be (very unlike their mother....)

A friend, who is a friend of the chef/baker, said she could finish one whole cake by herself. I was incredulous at first, but halfway though my first slice I was in danger of following her route. I had to restrain myself, or risk being mobbed by the two kids. And the baby.
Strawberry Cake 8" (in photo) Php540
Available in other sizes 6" Php345, 9" Php850, slice Php75
8"x12" Php1,100 and 10"x14" Php1,700 available upon advanced order

Email ThisBlogThis!Share to TwitterShare to FacebookShare to Pinterest
Labels: cake of the month, out of town, prutas (fruits), regional delicacies

My number 2 favorite is "strawberry shortcake". My #1 is leche flan. I could eat a whole bowl or pan of that stuff. Roz

My son would love you. His #1 is also leche flan.