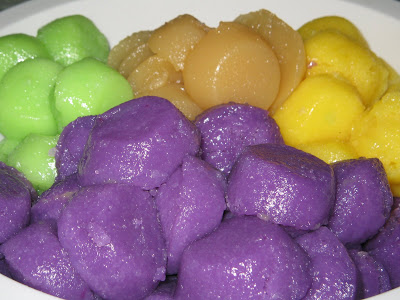 We attended a healing mass celebrated by well-known healing priest, Rev. Fr. Fernando Suarez, right on New Year's eve. During the homily Fr. Suarez lambasted Filipinos' multiple loyalties, which was quite timely considering how we observe the coming of the new year. I was secretly laughing, picturing how at that very moment my in-laws were trying to collect thirteen kinds of round fruits to signify prosperity year-round.

And I remembered the coins used on my wedding - I had not bought new ones, opting instead to use the coins that my parents had used on their own wedding, but I had been distraught because there were only twelve, and it was supposed to be thirteen coins in all. One for each month of the year, plus an extra to symbolize material excess. My then groom had asked what the fuss was all about, since thirteen was an unlucky number, anyway.

Sociologists label this as adaptation, or adoption, or integration. Whatever. The essence was that, we accepted what was imposed on us (in this particular case, the Catholic faith), but integrated it with our own existing practices. Perhaps the proper word is indigenization.

What is extremely popular nowadays, though, are Chinese influences, and observances borne from the Chinese practice of feng shui. So we serve sticky food, so good fortune sticks with us (but what if the reverse happens and misfortune stuck?), and we horde those round fruits, which is quite a difficult feat since there are not that many round fruits in the country. And whatever, other new practices feng shui experts suggest every year.

It is the sticky food and the thirteen round fruits that have integrated themselves into Filipino new year celebrations, though, year after year, along with loud and long-exploding firecrackers with such names as sawa (python) or Judas' belt (totally banned this year).

So on the way home after the mass I proceeded to our favorite Calasiao puto stand and bought thirteen kilos worth of puto. Joke.

Kidding aside, Calasiao puto is enough celebratory food for me. I love it to the last stickily chewy bite, and the kids love it, too. And because we rarely get to have it on our dining table, its presence always makes an ordinary day a festive one.

Calasiao puto is in a class of its own. Nothing is quite like it, not even a close approximation. It can only be found in Calasiao, a town in the central part of the province of Pangasinan, and can only be made there. It is sweet, and moist, as a kiss, and as bouncy. To me, all other puto are dry in comparison.

Our favorite puto-maker, though, is an enterprising one, and we have seen puto topped with slivers of cheese (previously unheard of, what we traditionally did was to sprinkle grated cheese on top, or slathered with cheese spread, prior to serving) make its debut about four or five years ago. It was good at first, but later on the cheese started to taste like flour dough, so we stopped ordering and went back to the grated-cheese-on-top/slathered-cheese-spread route.

This holiday season a surprise awaited us at the puto stand - Calasiao puto sporting Advent colors sparkled like Christmas lights. They have started to make flavored Calasiao puto! Ube for violet, mango for yellow, buko-pandan for green. And it was actually good. Better, way up there by several degrees, compared to other flavored puto being sold in Metro Manila, mainly due to the moistness factor.

These variants don't need cheese, as they are flavorsome enough on their own. Of course the original white is still the best, but now there are three more reasons to indulge. And more to add to that new year spread of sticky and round things. ;-)
Available only at the "Bella" kiosk
(the first puto stand, nearest the church)
Calasiao, Pangasinan
Original Php50/kilo, flavored Php80/kilo

I love puto (different flavors sounds good)! I also love kuchinta. Whenever I get a chance to go to the Filipino grocery store I buy those things. Plus ube. Now that I don't have a car I have not had any in quite a while. But I do crave them. Hope you had a Merry Christmas and have a Happy New Year. Roz

Yes, thank you, we enjoyed the holidays to the hilt as we had an almost 2-week holiday! Here's wishing the same to you, and hoping more Filipino food go your way!

Happy new year! You're absolutely right on the calasiao puto - the best! I bought 5 kilos for my in-laws for their (our) traditional reunion every January 1st. Ouch, di pinansin! Turns out, everyone just wanted to take them home after the party! Sayang daw kasi pag inubos agad at di natikman ng iba. Hooray!

Hooray, Ely, and happy new year to you, too, and to the family, and the entire Kapampangan clan. Great that Calasiao puto is also a hit in Pampanga!

where can we buy original calasiao puto, the one who originally started selling puto? of all the stalls near the church selling puto, which is the best tasting? tks.

Absolutely amazing the taste of the puto in Calasiao, even it's only made of rice the taste is really great i can finish a full bag of this delicasene, perfect in any time of the day it's up to you what best for you to combine when you eat.

hi i love puto of calasiao can you post the recipe because i want to make puto because my son like it....pleaseeeeee