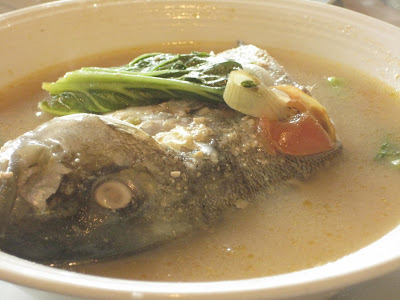 [Sinigang na Ulo sa Miso, Php240]
The agency I work for celebrates its foundation anniversary in the first week of January, marked by a mass, a toast to the new year, and subsidies for lunch. During this year's mass, the bishop who presided remarked that we now qualify for discounts (referring to senior citizens' privileges).

But even though our agency may now be considered a senior citizen, its employees are not, thanks to a wave of early retirement programs (three during my time alone) that sent most of our superiors and mentors on their way to spending most of their time at the golf courses, and mainly for pleasure. This, and massive hiring of twenty-somethings, helped bring down employees' average age substantially.

But, reminiscing, we miss the, as they say, good ole' times. Those retirees taught us most of what we do, now. And this includes not just etiquette and protoccol and systems and procedures, but a way of life, too - particularly what, where and how to eat, in the corporate jungle where we are.

They were in the business and commercial district long before it became one, when it was still a field of cogon grass and our building was the tallest one for miles around (it's now one of the smallest) and they, literally, saw to life and sustained many eateries and restaurants in the area, decades and decades before the explosion of the restaurant scene these past few years.

Such eateries were family affairs, in family homes, and served food evoking home-cooked meals. Most are gone now, with the transformation of residential areas into commercial ones. But a few remain, good and steady, still serving our employees and those of the (relatively) new offices around despite the numerous fastfood joints and restaurant chains. They are repositories of the area's history.

One such eatery - it's a carinderia serving food turo-turo style (a hole in the wall with pre-cooked meals, and you order by pointing to the dishes on display) is Friends & Neighbors, to which I was introduced early on in my working life. Employees of my agency have remained loyal to this (now) restaurant, its food still gracing many anniversary celebrations in many departments. 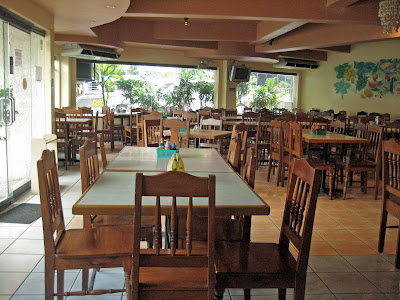 The elders recount that it started out in a nipa hut, right where it now stands, expanding for more room as people patronized it, and improving over the years to a wooden affair, then to a concrete four-storey building (the upper floors let out as a dormitory), and finally to an air-conditioned, spacious affair with an expanded menu. 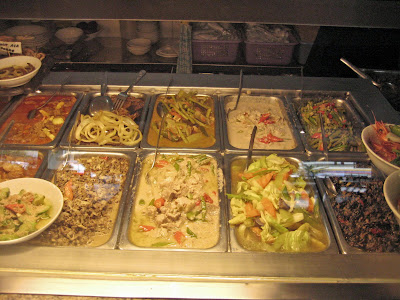 But the "core" menu remains, which consists of well-known and favorite Filipino dishes, served on ordinary days in most Filipino homes across the country. Nothing fancy, not gourmet, but with the goodness, and comfort, of home-cooking. 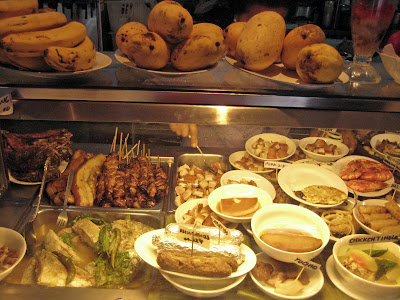 Slices of fresh fruits in season are always available, and their desserts, though not of the fancy kind, are always great to have - leche flan, sweetened saba with ice and milk.

The specialty dish, and the most expensive one, is sinigang sa miso, fish head in soured broth thickened with miso. The husband and wife team who put up and manage the restaurant have roots in Pangasinan and Bicol, and so it goes that their famous dishes are coconut-based - laing (taro leaves stewed in coconut milk and chiles), and Bicol Express (pork stewed in coconut milk and chiles).

For years, when I was still single, I had their pinakbet, and good bangus, every week, without fail. And that siningang sa miso. 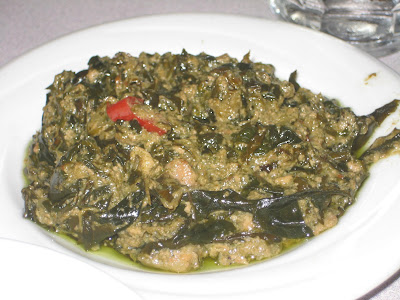 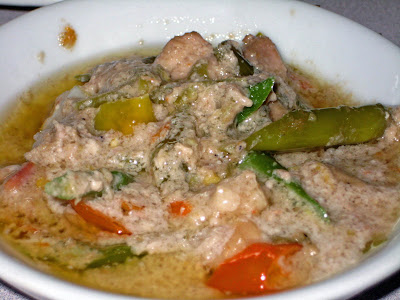 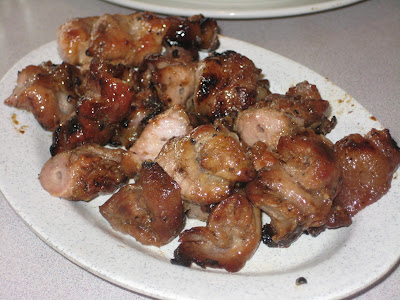 Pork barbecue served out of the stick. No self-respecting Filipino restaurant neglects to include pork barbecue (and chicken) in its menu. 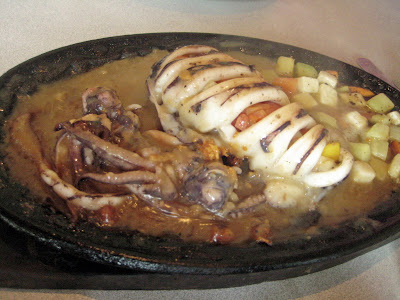 The expanded menu consisted mainly of sizzling plates, and among them this sizzling stuffed squid with a decadent gravy is out of this world. The sizzlers were mainly geared towards the after-office crowd out to relax with a drink or two, but they are ordered by the lunch and dinner crowds, too, and eaten with rice. 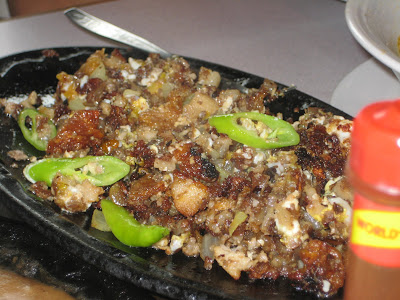 The sisig (diced onions, chopped pig ears and cheek boiled and broiled, to be seasoned with calamansi and chiles on the sizzling plate) that can give Gerry's Grill (for me the best place to eat great sisig) a run for their money.

Service is prompt and friendly, the general ambience is of a community affair - can be loud sometimes, especially in the evenings, but all in the spirit of a neighborhood gathering. And there's nothing like a place suspended in time yet attuned to the present, a repository of memories long past but still has a lot going for the future.