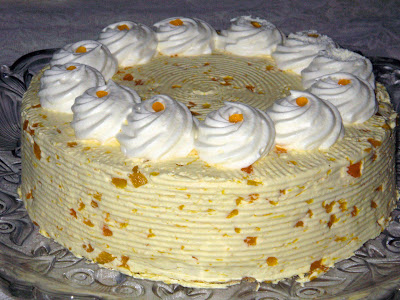 Mango cakes made by specialty bakeshops are not available around this time, because it is so out of the mango season, which is from December until about June. At least, the mango season in Luzon, because I was in Cebu at this time several years ago and I had the sweetest, succulent mangoes for breakfast at Mactan.

But Red Ribbon's Mango Cake (Php450, mini Php270) is available year-round, with no worries about the sweetness of the mangoes incorporated in the cake. Cheaper by any standard, too. I once thought dried mangoes were used, but upon re-acquaintance with the cake I revised my opinion.

The mangoes used are fresh alright. Many bits and pieces of them, riddling the buttercream frosting and the filling in between layers of chiffon. The resulting cake is so fragrant - as sweet-smelling as real mangoes - it made me want to drool. And my five-year old son said it smelled so good he wanted a piece of the cake right then and there, three hours before the commemorative party for his sister's month birthday.

I made the mistake of opening the cake box and displaying the cake on the table while I was still busy puttering in the kitchen. Every minute or so my son was poking his head into the kitchen - Mammmeeee! I want some cake! I can smmeeellll it!

And so I had to invent various reasons to stall the boy - the birthday girl is still asleep (he woke her up), eat proper food first (he ate a sandwich), let's wait for Daddy (he called Daddy to hurry up), until I had to give in, just to have some peace while cooking and let my ears rest from his whining.

So before anything was cooked the kids put on the candles, I lighted them, let them blow them off, and I cut the cake. They (a three-year old girl and a soon-to-be six year old hyperactive boy, both very slim) had demolished more than half of the cake before they let the nannies take away their plates, and they were fast asleep by the time the hubby and I sat down to dinner. 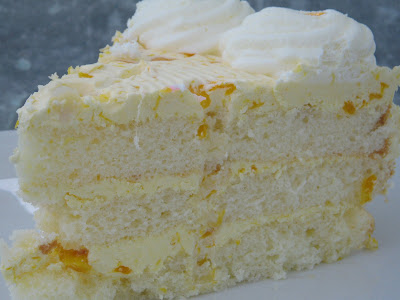 The mango cake has been in Red Ribbon's repertoire for ages, and it is still the best seller in many branches, even outside of Metro Manila. I first got acquainted with it many years ago - it was the favorite cake of officemates who bought it for no particular reason, or for giving it away as a gift, or as an accompaniment to fresh flowers when wooing a girl.

I swear it is still the same, delicious mango cake, glorifying heavenly ripe mangoes through and through. The chiffon is soft and fluffy, the buttercream silky and not too sweet, greatly enhancing the mango taste.

So far this is the most accessible among the cakes in my monthly cake series, and the lowest-priced. Yet it is greatly satisfying, and has the most value for money.

I actually like the reliable standards of Red Ribbon - this mango cake, the ube cake, chocolate mousse, black forest - though most of the new products they have been coming out are major letdowns, like the red velvet (like a very dry, bad fruitcake), the marjolaines, tiramisu, the s'mores (too sweet).

A mango cream pie was debuted two summers ago and it was the greatest pie I've ever eaten (of course, because it's made with my favorite fruit). A crumbly, shortbread/butter cookie crust filled with a luscious sweetened cream, then finished with thick slices of honey-sweet mangoes. It was lustful. I had been ready then to trade my chocolate mango trifle.

Sadly, its reappearance last summer was a disappointment. That sublime crust was replaced by a soggy, ordinary flour crust, and the mangoes were sour. That was the time I vowed never again to deprive myself of a pie for a year, waiting for an exact remake of that great mango pie. I'll stick with the mango cake.

Email ThisBlogThis!Share to TwitterShare to FacebookShare to Pinterest
Labels: cake of the month, prutas (fruits)

Now that is something I just drooled over. What a luscious looking cake. Mango is my favorite fruit. That is the one fruit I miss so much. You can get them here (US) but they are mostly from Mexico and are very stringy. I love anything made with mango. I don't drive anymore but I use to drive to this small PI grocery store and buy all kinds of things. I took mango and ube ice cream to work and everyone loved it. Roz

Wish I could send you some Tita Roz!

My mom (Roz) said I had to come look at the cake. I can see why. Very yummy looking.

I'm with my mom, the mangos here aren't really the best. I'll have to see if I can find some Mangos imported from the Philippines once the season starts.