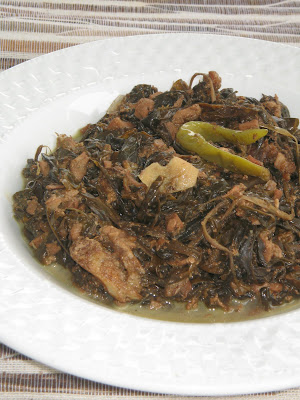 I would have titled this santol laing, since laing with santol is a novelty. But this is the true laing, from the Bicolanos' point of view, and I am defeating the idea by giving emphasis to the santol.

I remember that during our Saturday lunches, a long-time Bicolana friend squeezed kalamansi on the laing we regularly had. I let her taste this, and she said it was cooked like a true Bicolano laing. At least the laing from the northern part of Bicol.

The true laing, as are the true ginataan from Bicol, have sour undertones. Ginataan uses vinegar, especially ginataang isda (fish in coconut cream), to cut through the richness of the gata. Laing uses kamias, for the same reason.

The sourness, which mellows down to a mere suggestion of sweetness in the case of the santol, is a surprise element for those not used to the flavor in a laing. The surprise is pleasant, and makes you ponder why all other laing are not cooked this way. The pairing of creaminess with sourness-sweetness, punctuated by varying degrees of heat, is perfect.

I first tasted laing sa santol at the beginning of this year's santol season. It was cooked and brought to the office by a Bicolana, and I couldn't get enough of it I vowed to cook it at home. It was explained that santol was used in place of kamias because they were bountiful at the moment. I am intrigued with the use of kamias, and I will use it next when the santol totally disappears from the markets. 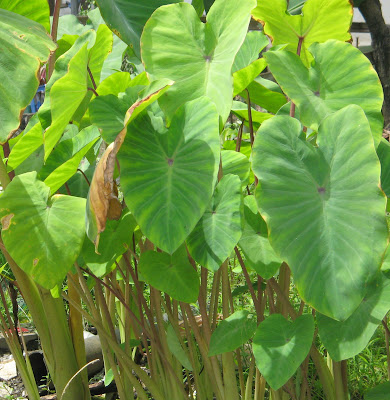 Laing uses the leaves of gabi (taro, Colocasia esculenta Linn. Schott & Endl.), for some including, and preferably with, the stalks. 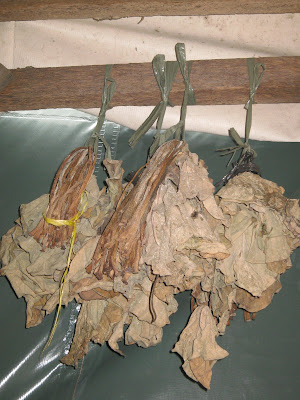 The leaves to be cooked into laing are first dried, hanging from the rafters, so the itchy hairs or fur drop off. Some would prefer the leaves to be totally dry, so they don't absorb much coconut cream while cooking.

The dried leaves are then torn into thin strips, and mixed with flaked salted, dried fish for flavor (in Bicol they add the dried, fermented krill rolled into packed cylinders, which I failed to buy when I was Naga, so I substituted hibe, or dried, peeled whole shrimps). Peeled, crushed ginger, and probably crushed garlic and sliced onions are added for spice, and the santol, diced, and some sliced chiles, both to prevent the laing from becoming cloying.

Laing, as Metro Manilans know it, is rice intensive, or requires a large amount of rice to be eaten with it, because of its richness. Laing sa santol is more intense - more rice is eaten unprecedentedly because of the sourness. You eat more of it since it is not so rich, consequently you eat more rice. I don't know if there's any logic to this, but it certainly happened to me.

One more thing why I love laing sa santol is the fact that with it, I can eat santol and relish its puckering sourness without all the accompanying toothaches. Many, many summers of green mangoes and many, many rainy seasons of santol have taken a toll on my pearly whites, to the point that just by looking at santol I could feel the familiar pain starting. Growing up has its disadvantages.

Intriguing. Thanks for sharing. Would love to try laing with santol one of these days.

Well I hope you find santol in Vancouver!