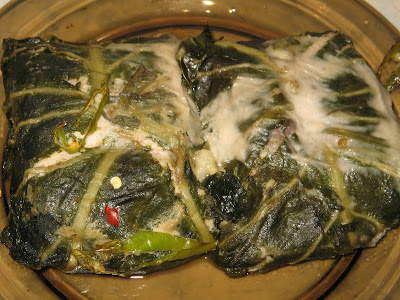 Pinangat is a traditional Bicol dish that's sold by vendors who walk around town starting around lunchtime. The entire morning is taken up with the preparation and cooking of pinangat due to the amount of work involved.

It is a handy meal in itself, and is a particularly heavy lunch to be had with steaming hot rice. Much, much more rice than your usual because the authentic pinangat is fiery so it cuts through the richness of the coconut cream. 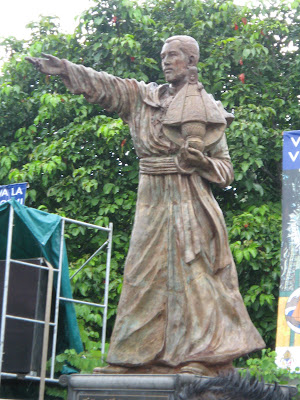 I joined a regional conference for our offices in Bicol, and it was just my extreme luck that it was scheduled on the eve of the translacion of Our Lady of Peňafrancia. So I booked my return flight late the following day so I at least could observe the ritual.

It turns out my luck had peaked, because this year is the tercentenary of the Peňafrancia celebrations. Until I went to Naga last week I haven't heard of that word tercentenary, which means it is 300 years old.

And as if that wasn't enough, this tercentenary celebrations has been imbued with deeper meaning, because the Archbishop of Caceres (the archdiocese of the Bicol region) had been diagnosed with lung cancer and refused any medical intervention. Just before the Peňafrancia gala he was cleared, the cancer absolutely gone. 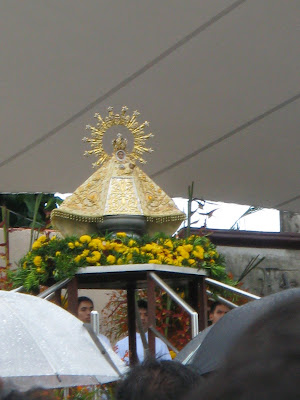 The translacion is the official start of the Peňafrancia. Non-devotees, to which camp I previously belonged, only know of the fluvial parade, which takes the image of the INA, as she is reverently called (Filipino for mother) back to the Basilica of our Lady of Peňafrancia.

But the translacion happens nine days before the fluvial parade, which involves a procession along the streets of Naga City to take the image from the basilica to the Naga Cathedral for a nine-day novena. 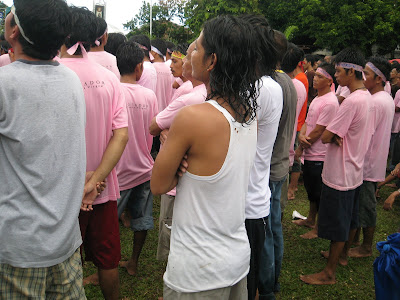 During this year's translacion the image was first taken to the Peňafrancia shrine for mass before the noon-time trek to the cathedral. I was told this year had the biggest turn-out so far, which was highly warranted given the circumstances surrounding this year's anniversary. The heavens dumped rains while the congregated people waited for the translacion to move, but it didn't dampen the spirit a bit. The rains were even greeted with joyful shouts, taking it as blessing from above.

What was interesting was the mass of men, from late adolescents to senior citizens, lining the route of the procession. They wore t-shirts in uniform colors (different colors for each zone), had cloth bands around their heads, were unshod, and extremely drunk. Yes, drunk, extremely so, all of them. Which contributed quite a lot to the merry atmosphere of the occasion. 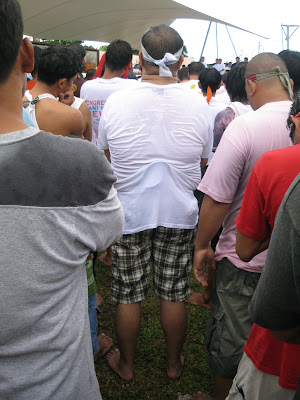 But as explained by the locals, the drinking habit during the Peňafrancia was not to enliven the proceedings. Because the men, officially called voyadores, carry the image, or the truck on which the image is placed, and are responsible for letting the procession move along. 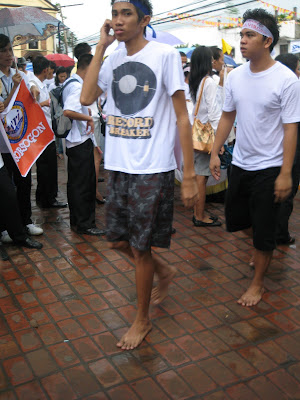 And because it is a religious ritual we are talking about, and a ritual that has an infinite list of miracles attached to it, people are bound to be packed, very tightly so, during the procession, with the requisite pushing and shoving and elbowing. Slippers are bound to be left on the roadsides, shoes hurt feet upon trampling them. So everybody's barefoot.

As for the drinking, it is to prevent the men from fainting. No, Bicolanos are not Maria Claras, but I don't think even Hercules himself could tolerate the smell of a million different male bodies copiously sweating under the noonday sun, with all the odors associated with it emanating from them.

Since the festivities started at noontime our office in Naga provided an early lunch. No pinangat there, as it was catered, and no pinangat on the streets either. There were only woven buri fans and hats which were useless under the rain, and proved even a liability, for the sewn yarn embroidery bled and stained our clothes.

But we did go around the city the night before, and a Bicolana colleague pointed out that Molino Grill along Magsaysay Avenue serves authentic pinangat. The pinangat comes in regular and spicy variants, and is available frozen to bring home as pasalubong. But it is also served as pulutan, since Molino Grill is a bar.

The spicy variant had run out when we got there, though, so I was able to procure only the regular kind. It was great, very lightly creamed, the filling totally devoid of pork fat, unlike copycat pinangat that have lard as a cheap extender. It had slices of sili pansigang on top, which could be crushed for a mild heat.

Pinangat is known in the northern Bicol area as tinumok. What we know as tinumok in Metro Manila, however, is vastly different, as it contains ground pork and is wrapped with pechay or cabbage, which is easier to clean and cook.

Taste the flavourful combination of coconut meat, seafood, spices, wrapped in gabi! Wouldn’t that be heaven boiling in your every bite? Add to it a spicy taste and coconut milk that would accentuate the rest of the flavors in your mouth. That is “Pinangat” in Naga City cooked into perfection only by Twins Pinangat.

It’s high time we Nagaeunos reclaim the rightful title as the best pinangat maker’s in Bicol and go back to the roots of our palate. As the most progressive City in the Region, we had been busy with modernization so much that nearby provinces made their version too far compared to the original Naga City Pinangat.

Compared to the blunt and boring flavours produced by our neighbouring Provinces, Twins Pinangat the original Pinangat maker of Naga City Pinangat is made from local “gabi” leaves (i.e. taro). Every neighbourhood will have these planted nearby. These leaves are cooked fresh together with a stuffing of coconut meat, spices and seafoods in a boiling coconut milk the succulent flavour produced by Twins Pinangat makes this delicacy a huge hit in the local cuisine of the Philippines.

Let’s support Twins pinangat resuscitate this dying tradition of Naga City, Naga’s Pinangat is the best flavourful you could ever taste.