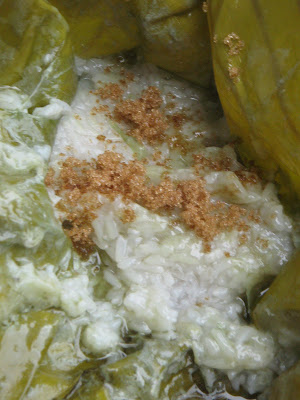 Binatog is this common street food in the general Luzon area of boiled, whole white corn kernels that's eaten with grated young coconut and sugar. I haven't developed an affinity to it, as I had been warned by elders when I was a child that the combination of coconut and corn is lethal for the stomach. And of course it is streetfood, with all the gruesome reputation attached to it. 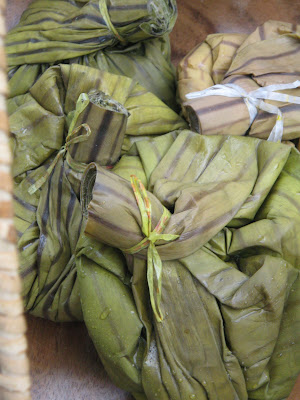 But when you get to Daet, in Camarines Norte, the first province of the Bicol region, binatog is not corn, but a kind of suman. But again it is not the usual suman that we know - rolled into cylinders and wrapped tight, so that when you're getting fat and you are close to bursting your clothes' buttons you are also called suman.

Binatog in Daet is glutinous rice (malagkit) that's cooked in coconut cream, salt and ginger, just like the common suman. But instead of rolls it is scooped into a piece of cut banana leaf, the edges gathered and wrapped with a string so it is ensconced in a packet, the kakanin loosely resting at the bottom. 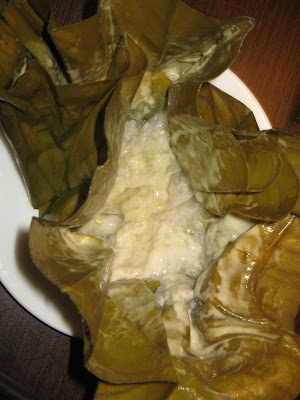 So it is not a compact thing that you dip in sugar, but rather a moist and creamy, semi-dry porridge that you eat with a spoon. It's common merienda fare, or afternoon snack, in Camarines Norte. 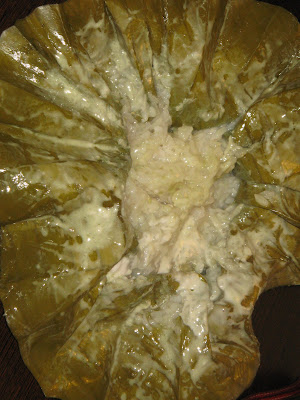 A little sugar is sprinkled on top, and the mingling of saltiness and sweetness and the creaminess of the gata on your tongue is almost too much of a sensual experience. Perfumed by the banana leaf packet in which it had been steamed, and with undertones of the ginger that provide spikes of spice, the crunch of sugar on the yieldingly soft grains, the thick coconut cream a constant presence, it's a multi-textural, multi-sensory encounter. 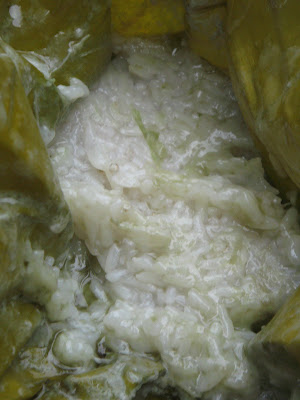 I may sound crazy with my world turned upside down by something so ordinary, so homey, as a suman. But that's precisely the point. It had been more than a pleasant surprise to find that there can be other ways of cooking glutinous rice with coconuts and bananas. It's comfort food to the max.

Thanks, I'll hunt all of those down when I get a chance to go to Camarines Norte. I only got hold of binatog because an office colleague brought some from Daet down to Naga.

Hi Kai, I miss binatog in our hometown Malasiqui. Can you send some? And thanks for the posts, enjoy reading it. -- clar.

Kai, from what I remember 20+ years ago, it was inside our hometown "tindaan" next to the "pakanan" section. Also on Wednesdays and Sundays during "tinda" days in Quintans St. That was long time ago. --clar.

Yes, indeed, that was a long time ago, and I wasn't a market rat back then ;-)

This is not the usual binatog. I hope to have a taste of this delicacy. Looks interesting with its packaging.

No, indeed, it's not the usual binatog, though the corn binatog and this one are both carbo-loaded!;-)

The suman you refer to as Binatog is more commonly known in Albay as BINUTONG. I was not aware it's called binatog in Daet.

Hi, thanks for that tip!

Hi Kai! I was born and raised in Daet but have not been home for more than 10 years. From what I remember, Binatog is made out of Corn Kernels and is sprinkled with sugar when being eaten. The pictures in your post refers to what I have known as Binut-ong or Binutong in other parts of Bicol. :-)

The friend who gave this to me is from Daet also (maybe on the other side of Daet?), and does not know that binatog is boiled corn and grated coconut somewhere else. Binutong and binatog sound alike, anyhow. ;-)