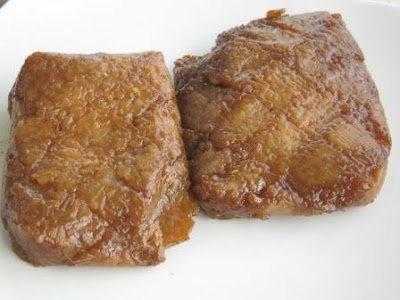 This is a traditional Pangasinan kánen (kakanin, rice pudding), made by cooking together glutinous rice, gata or coconut cream and sinákob (panutsa, molasses cakes) or brown sugar. Inkaldít to Pangasinenses residing in the central part of the province, patopát to the outlying areas with Ilocano influences. It is much like the Tagalog bíko, the difference is that the partially cooked rice is put inside onós - young coconut leaves stripped of its thin backbone or tingting - woven into fat rectangles, then steamed. 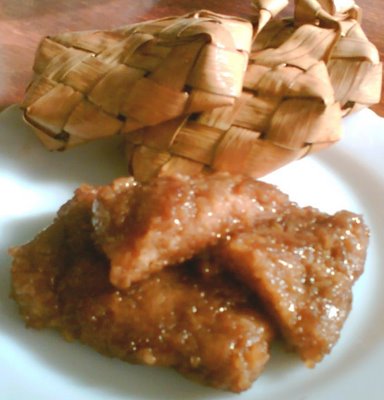 Like the Visayan pusô, too, although bigger, and this is sweet, and eaten by itself, for a late breakfast, perhaps, or mid-morning snacks.
The woven coconut leaf casing makes this delicacy handy, although it's a bit sticky (which gives good reason for indulging in the childish joy of licking fingers), and preserves it well. Unlike bíko, latík, or any other "naked" kakanin spread on a biláo (woven bamboo winnowing tray), inkaldít can last up to several days, and can be stored in the refrigerator, just needing some steaming to soften it up again. 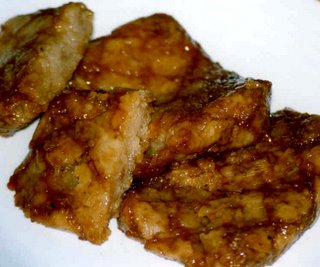 Paradoxically, though, however pretty the lattice design the casing imparts on the rice, the "skin" makes it hard to get to the sweet, sticky treat inside. You would need a sharp knife to cut the leaves, and by the time you've realized that you've already smeared your fingers with the brown syrup seeping out of the weave, and you likewise smear the knife, making it slick-difficult to handle. But you don't want to wash your hands. You want to lick them. Go on, nobody's looking. But there's still the slippery knife. You lick it, too, the handle, the blade, and so you cut your tongue...
Next time remember to have a knife ready, and cut in the middle through the skin and onto the rice. You pull back the cut coconut leaves, proceed with dainty, tiny bites until the case is empty, consuming one of the two halves in three bites before proceeding to the second half. Three rectangles are sold knotted together, which logically tells you that all three means one serving for one person, and so you're welcome to eat them all. Just be sure not to eat anything else for the rest of the day.
When the glutinous rice used is newly-harvested, inkaldít is pure, soft, gooey bliss (so you understand how it can be eaten so fast). Some, though, mix in ordinary rice, making the inkaldít mabató (literally, "stony," or interspersed with hard grains, used to refer to impure grains and legumes). So you have to know from whom you're buying it, although in hard times that is no guarantee for really soft inkaldít made entirely of ansák-ket.
So if only I'm an expert weaver, I'll make some inkaldít myself. But until I learn the ropes, I just have to buy from trusted makers around harvest time up until about July, when planting time starts, and signals the time of gáwat (literally "to reach," but also used to refer to hard times). Maybe Inday Sha can teach me how to make pusô, and I'll take it from there.
Posted by Kai at 5:13 PM

Wow, my companions here in the office just made the same observation re the Inkaldit/Patopat - its a messy affair! Ive never tried this before. Although the mention of the coconut leaves casing reminded me of another one of my lola's staples - ibos. You need the young coconut leaves to make the ibos. And you need a certain expertise to secure the sticky rice inside. I really like reading about our native food. Thanks for sharing.

bakit may kulay ang patopat na to?
ito mga manang dini binigyan nila ako eh wala kulay... does the area play a role to a patopat variety if there are varieties?

they are from candon ilocos sur.

dalhin na lang kita sa cebu... i used to weave the puso when i was young...puso is just plain rice but this is one of the cebuano food M the swiss cheese loves so much.

sha! lol!
anyway, kai..this makes me reminisce on our brunei days..they have these guys during a special occassion i cannot put into words anymore! tanda ko na!
i hope i can drop by our lady of manaoag on my coming trip! are you anywhere near there?
i am also inviting myself like sha! hahahaha!

TC, you're right, the same leaves are used for suman sa ibos, I hope to post about that sometime, we have a different suman sa ibos in Pangasinan. I hope, though, you could feature your lola's.

Sha, lol talaga! You know I haven't seen an Ilocano patopat (I mean outside of Pangasinan, since there are many Ilocano-speaking towns in the province, more than the Pangasinan-speaking ones). If the white patopat are sweet, then maybe they mix in white sugar, not brown sugar or molasses. I'll be disoriented, though, if I see a white patopat. It's probably high time for another visit to the Ilocano North!

I ate puso in Cebu, with inato. Sige, sama ako sa yo pag-uwi mo. Hope you could find some coconut trees in the South of France?

For the last commenter, it's easy to make actually, if you do away with the coconut leaf weaving. If you can find gata and glutinous rice where you are, you're practically done. I have a future post about making the basic rice pudding, coming up probably next week.

kai..it's been that way ever since..i go up there at least once a year and i don't miss out on the local goodies outside the church esp. tupig! no worries,,i'll definitely let you know!:)