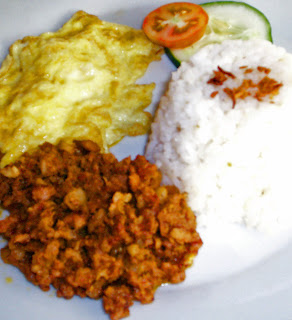 [Chorizo Breakfast]
Bigg's Diner was just a 2-minute walk from where we stayed in Naga City, so it became our breakfast joint, especially since our daily schedules began at 630AM, and Bigg's is open 24 hours.

We loved the chorizo plate with scrambled eggs and fried rice. Also the pasta platters, which include a piece of Bigg's specialty fried chicken, plus a pizza slice. For the pasta you can choose between carbonara or bolognese sauces on spaghetti.

[Pasta Combo Platter]
Bigg's evolved from being named Mang Donald's, then Nald's, obviously in reference, or probably in deference, to the multinational fastfood giant. When it started operations back in the early 80's, there were no fastfood restaurants around Bicol. Even as late as my visit with the butandings in Sorsogon I spotted no Jollibee or Mcdo anywhere in Bicolandia. So Bigg's captured that niche - our natural craving for American fast food.

According to an article featured in Vanity Magazine in its December 2005 issue and printed on paper that serves as your placemat when you eat at Bigg's, the name came as a natural choice because Bigg's burgers are 30% bigger than what other fastfood chains offer.

I ordered the Bigg's burger one breakfast, and took out the cheeseburger and cheesy mushroom variants as pasalubong. They were all satisfyingly gourmet this side of the country, complete with large onion rings, tomato slices, lettuce. The burger patties were thick yet juicy, and, amazingly, sported herb flavors - mainly rosemary. My son loved the toasted sesame seeds that topped each bun.

It's not just a burger joint, though, because Bigg's is truly a diner. All things on the menu - rice toppings, fresh vegetable salads, silogs, pasta, pizza - are available any time of the day, and all through the night. And with the hodgepodge menu, it was surprising that most of the dishes we tried were good. Particularly the chicken teriyaki - almost better than the one cooked in any respectable Japanese restaurant. 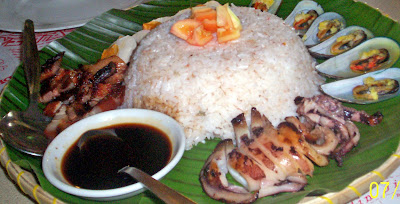 [Bob Marlin Platter]
We had two meals at Bob Marlin's because the owner used to work for the Naga branch of our agency. The name was culled from the reggae artist Bob Marley, who's a favorite of the owner's son - evident in the restaurant design and piped-in music - and the pelagic fish blue marlin.

Bob Marlin is more of a drinking joint - "your reggae getaway." Great food. Soothing sounds. Good times. The outside patio ambience is nice, especially at night. I never saw a menu - our hosts ordered in advance both times and we came to the restaurant with the table already laid - so I don't know if they actually served blue marlin. We never had one.

What we had were so delicious, though, and represented the bounty of the area. The Bob Marlin platter had squid lightly grilled that it was so soft to the bite, garlicky baked mussels, and grilled pork belly that was so well complemented by the dipping sauce. These also went so well with the accompanying tomato and salted egg slices.

And that mound of rice in the center? It was probably the best fried rice I've ever tasted. It had nothing but dried krill mixed in it - those minute shrimps used in making bagoong alamang - but it was so good. The flavor is rich but not overpowering, gently adding a new dimension of taste when paired with any of the grilled items. 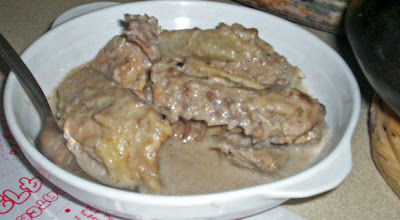 [Ginataang Adobo]
Bob Marlin's ginataang adobo (vinegar stew in coconut cream) uses native chicken (free-range or organic), and is garnished with papaya slices and young sili leaves. More of a ginataang tinola for me. It was superb, with just the right levels of saltiness, sourness and heat, effectively rounding up the gata flavor.

We also had sinigang na lapu-lapu (small grouper in sour broth) served in a palayok (clay pot). In Pangasinan we never cooked lapu-lapu in a sinigang because we deemed the flesh too bland - too expensive, too - for the soup. But apparently lapu-lapu sinigang is a common dish in Bicol - I also had it in the home of a very good friend in Daet. With the abundance of the fish in the region, coming from the Pacific, lapu-lapu can be had fresh and cheap and just perfect for sinigang. At Bob Marlin's the level of sourness of the soup greatly enhanced the fish. 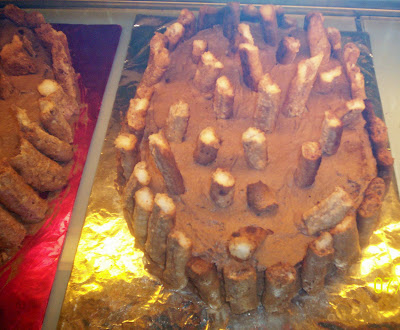 [Concorde Cake]
Cafe Candice has been known for the longest time in the city for toasted siopao, probably for sentimental reasons more than for the taste. The bread is more putok than your usual white, soft siopao, with ground pork filling cooked with diced singkamas (jicamas) and spring onion leaves.

But we had a slice of this great cake - pure sugar high! It sustained us during our shopping frenzy in the daing (dried fish and seafood) section at the second floor of the public market. It's a chewy milk chocolate mousse surrounded by broas (lady fingers). Excellent with coffee.

What else did we eat in Naga?
Pinangat Pizza!

Email ThisBlogThis!Share to TwitterShare to FacebookShare to Pinterest
Labels: out of town, regional delicacies, restaurants

Yum, it's so good to see your posts again, Kai. What a coincidence! I was just at Joey's blog and saw her chorizo and fried rice post -- GMTA?

omgoodness! that made me drool!!!missing those food!!!