My Most Memorable Valentine's Dinner 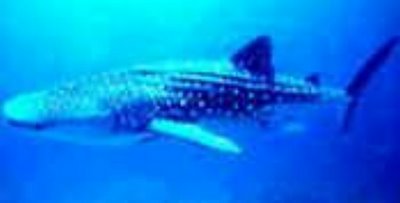 Butanding, Whale Shark (Rhincodon typus)*
No, I did not eat a whale shark that Valentine's day, some few years back. But I did eat its cousin.
It happened on a whim, between two long-time good friends who wanted to escape the crass commercialism and corny, bumper-to-bumper traffic-inducing celebrations in the metropolis. Our perfect solution came in the form of a 12-hour bus ride, spanning the entire night, to Legazpi, Albay, and another two-hour ride in a mini-bus (a cross between a Philippine jeep and a bus), to the ultimate destination - the backwater town of Donsol, Sorsogon, placed on the world map by the capture of a whale shark two years back.
The last leg of the journey passed around the most famous Filipina virgin with a temper, Mount Mayon, the road traversing rolling hills, which were all uncannily familiar to me. It was my first trip to the Bicol region, and the strange familiarity of the moistly green hillsides was heartily explained by my companion as a memory from my other life as a diwata ng kagubatan, or the local dryad. I agreed.
We arrived in the afternoon, had some slices of Nanay's pizza (very much like 3M Pizza) for lunch, and proceeded to the tourism/WWF center. We arrived too late - whale shark spotting tours were conducted in the mornings. So that afternoon we registered for a spotting tour for the next day and underwent an orientation seminar, then had the rest of the day to ourselves.
There was nothing else to do, no malls, no cinemas, not even a TV in the lodging house where we checked in, so we strolled around the poblacion of the small town, which took all of thirty minutes, then to the beach.
To be well-rested for our morning activity the next day we decided to have an early dinner then go to sleep. So we scouted the palengke (market) in search of some food, giving up any hope of a gourmet Valentine's dinner. We found a vendor selling cooked food in some covered tin pans. Opening one the vendor said she had kinunot na pating. I didn't know the dish, being a Bicolano specialty, but I very well understood what it was made of. Pating is the local term for shark.
Being wiser now I know that kinunot means anything cooked in gata or coconut cream and malunggay (moringa) leaves. But that time my friend and I were a bit taken aback, and were speechless for a while. When we recovered our composures a bit we went on and saw a small "eatery," a hole in the wall with two tables placed beside the sleeping quarters of the family operating it. I don't remember particularly now what was available and what we ordered for dinner, but that I became restless and decided to go back to the vendor selling the kinunot, and bought a serving for Php10.
My hotelier friend wouldn't touch the kinunot, telling me we would be actually swinmming and interacting with whale sharks the next morning. So I ate the entire serving, justifying the act with the thought that I was in Bicol, and Bicolanos ate sharks like I ate bangus (milkfish) in Pangasinan - almost every day. Cultural immersion and assimilation, anyone?
The pating didn't have a particularly distinct taste and texture, and it could very well be mistaken for another white-fleshed fish, like a chewier, flakier lapu-lapu (grouper). My Bicolana officemates confirm that kinunot na pating is a common enough dish in their region, and it's not like the sharks are killed mercilessly and left to die with a gaping hole where their dorsal fins used to be. They catch young, small sharks, and cook the entire fish. I love the rich flavor a dried shark's fin imparts to a thick soup, but I have ceased eating it a long time ago. The kinunot was made creamy by the gata, punctuated by the green notes of the malunggay.
The family's television was running, and a feature came on about the then current costs of a Valentine's day dinner. The well-heeled restaurants featured special menus running to thousands of pesos per person, and we snorted with hysterical laughter. For, that evening, my friend treated me to a Valentine's dinner worth Php60 for the both of us, including soup and two bottles of softdrinks. AND shark, to boost. Nothing could ever top that.
Good thing I was a dryad in my other life.
Happy Valentine's Day, everyone.

Ha ha ha. What a memory! I don't recall seeing you scribble notes that time. I barely remember the details except for the pizza and the pating dinner. I tasted din naman the pating. Parang stingray dion ang lasa.

What I still clearly remember is the natural high from the interaction with the whale sharks. I remember just diving and forgot to put on goggles. What's worst, I forgot that a week prior, my left shoulder was dislocated.

That trip was awesome.

PS. Remember those Japs we were with in the boat? They were so aliw with the calamansi. They were squeezing them straight into their mouths like crazy.

Whoa there, friend, you're pre-empting me! I would like to relive all of those things soon, in a travel post!

What a great story! I would have also eaten the shark...I love trying local specialties :) And swimming with the whale sharks! What an experience!

kinunot, hmmm. sweetish with the right gata and the ligaments of the pating soft and chewy. Spiced with green chilies and dahon ng sili. Now you got me missing my lola who cooked a mean kinunot when she was alive. Thanks for the memory, kalad!