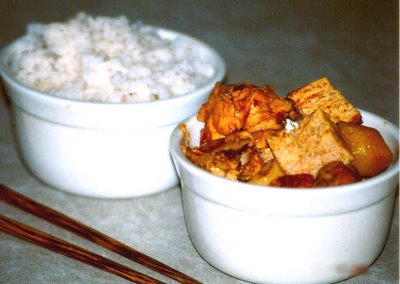 My first child's first nanny was an overseas contract worker in Taiwan for a year. When she came back home she was called Taiwanese teasingly by members of her family because of her penchant for introducing things Taiwanese.
While waiting for another employment stint abroad, she came with us to care for my then two-month old son when it was time for me to go back to my office job after my maternity leave. And while I never called her Taiwanese, she taught me many things Taiwanese, too. Since her job included cooking our meals while I worked during the daytime, she also introduced many new dishes in the Taiwanese vein.

These included chicken mapo tofu. I like to bring along my babies while grocery shopping, so I invariably brought the nanny along, too. On one such errand she espied a packet of mapo tofu sauce made by Lee Kum Kee on a shelf. She asked me to buy one so she could cook something Taiwanese that evening.

I am, and have been for as long as I can remember, a fan of Chinese dishes. Most of the restaurants in Dagupan City were owned and operated by Chinese businessmen while I was growing up. In Metro Manila we eat out mostly in Chinese restaurants during regular days (by which I mean when there are no special occasions to celebrate). But I never encountered mapo tofu. It is only now that some Chinese, even Japanese, restaurants are starting to carry this hot dish.

From what I read on the label of the mapo tofu sauce pack, mapo tofu is originally, or more commonly, cooked with ground pork and fresh tofu, or tokwa in the Filipino language. I've tried it, but I like the version my nanny cooked better, and it's what I've been cooking for years now since she had left us for greener pastures.

Her version involved sauteeing about half a kilo of chopped chicken and covering it until cooked, then pouring the mapo tofu sauce and letting it simmer for about three to five minutes. The chicken is transferred to a plate and topped with previously fried cubes of tofu. I've tweaked this by mixing in the fried tofu in the sauce while it simmered so it could soak in the flavor. I've also tried adding cubed potatoes, letting them cook in the sauce so they could also absorb the heat and flavor.

I love the fiery hotness of the dish, the sauce dribbled on steamed rice, or even fried rice. It is good to eat, hot, in cold weather, inducing streams of perspiration. Mind and tongue tingling, calling for a square of chocolate at the end of the meal.

you must have been so lucky to have her...at least she learned the proper way to prepare it in taiwan.

never had this kai...

She really have her uniqe style and very different ingridients for using, insted of a ground pork she use chicken. You really must have been so lucky to discover her style of cooking.

wow! looks delicious. thanks for sharing this. gonna try this one at home. :)