The Politics of A Mango Harvest 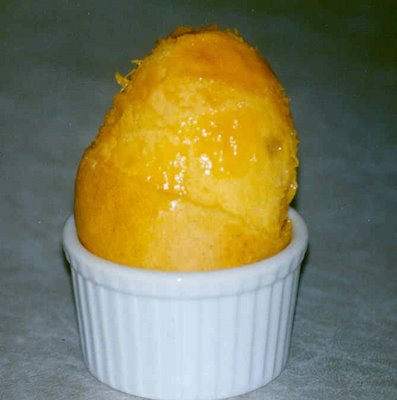 This is the proper way to eat a ripe mango. Peel the skin with your hands from the pointed end, going around until only about a third is unskinned, then proceed to bite, from the top, holding the portion with skin still on.
Bite deeply, to the bony seed and around it, sucking on its fibrous fur. You're not doing it properly if the juices don't run down to your wrists and forearms. When you've uncovered half of the seed with your slurping, wet bites, transfer your hold to the end of the seed and peel the remaining skin.
Finish the fruit, taking care not to suck on the flatter end where the stalk was cut, or else you run the risk of developing swollen lips.

It is now almost the end of the mango season, and I'm starting to feel I cannot let go. I'll be in denial for the next few weeks or so, moaning the rising prices of the fruit - due to the diminishing supply - and its eventual disappearance.

That, despite the angry heat rashes on my baby daughter's back, neck and forehead - due of course to her daily intake of the sweet, juicy fruit as breakfast. But I've had the same every summer since I could remember, so let her have it. It strengthens character (haha). And her love for the fruit.

Having grown up with mangoes largely featuring in my life (among other unique things pertaining to food in my beloved province), I have developed the skill -or maybe it's inherent - for picking out the sweetest, most succulent fruit.

The very first and most important consideration is smell. Every December and during summers the family would have kaings and kaings of mangoes ripening in our storeroom in the kitchen, and the smell pervades the entire house.

We'd be in a state of bliss from the sweetness that accompanies us everywhere, but it becomes maddening as the days go by as we await when we could taste the first ripe mango.

But of course we are not such control freaks - the first moment we get our mango ration and before laying each and every fruit for ripening on the newspaper-padded floor of the storeroom, we eagerly peel several, slices dipped in bagóong and disappearing as fast as they are pared from the unripe fruit.

This goes on until our molars become numb from the sourness and we cannot eat anything else. Ahh, such drool-inducing memories.

An unripe mango also smells. Of sourness and of the tree it has come from. So I am instantly afraid of a mango that lies near me but does not communicate.

And I become deathly afraid if I put it to my nose and still I detect nothing. Even from afar, a ripe mango that was not induced to ripen by chemical means should be announcing its sweet presence, and with a booming voice.

The second consideration is looks. May I just digress, and add that I apply this order to how I consider men, in general, too. My Flynn smells handsomely, although of course I'm not saying that he's not good-looking.

Anyway, for mangoes I was saying looks. Or the lack of it. Like how all organic food should look, a sweet mango should not look perfect. It should have blemishes, even black or dark marks and streaks (though not including bruises). 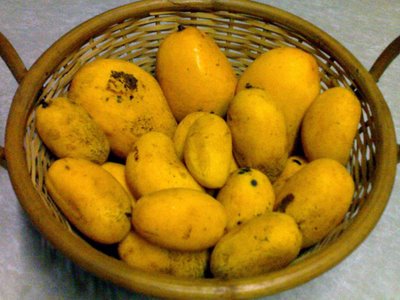 Such is the way to ensure that the mango was not forced to ripen using the chemical kalbúro (calcium carbide). It's easy to tell, anyway, because a mango that is kinalbúro is flawless, and has a very pale yellow color, compared to the hot, sunshiny yellow of the naturally ripened mango.

Even mangoes hastened to ripeness by naturally physical means, such as wrapping them with newspaper or storing them in a dark place or container, comes out looking naturally imperfect.

A kinalbúro tastes sour, with not a flicker of a hope for sweetness, even if it looks so ripe that it is already beginning to rot. Or, at the least, it will taste bland. That's because the chemical arrested the ripening process, denying the fruit the chance to develop its inherent sweetness. It is actually very cruel.

However, there is another way to make certain a mango doesn't realize its full potential, as I've recently found out.

For years and years the mango orchard my paternal grandparents planted themselves had been managed by a trusted kasamák, or tenant.

The tenant took care of the pruning of the trees, spraying them at the precise time (when the trees turn a new leaf), watching over the flowers and eventual fruits day and night, quivering when a typhoon passes by on its way out of the country, until it was the right time to harvest them, which was when the unripe mangoes have become maták-kęn or mature enough to ripen.

That is when a buyer is sourced out, the entire harvest is bought wholesale, and the kaláb, literally the climb which means to climb the trees to pick the fruits, is scheduled. This is the exciting part, because then we get to have our mangoes from the ten kaings that is left for the owners and the tenant.

This year's mango season (which started last July, with the turning of the leaves) marked the first time the tenant handed down the helm of the orchard to his son, having grown already weak and frail with age. That development saw a slight deviation in the management of the property, which eventually affected the quality of mangoes that we got this year.

Before, all was done in timing with the dictates of nature. That was still applied now, but not through the harvest. In the previous years we've heard about not getting enough returns because we did not get the right price - due to the timing of the harvest, coinciding with many others in the province.

Which meant mangoes have already started flooding the market, pushing prices down. But we never did anything about it, because nature largely controlled the factors. There is no way to hasten the fruit-bearing season - the mango trees have to sprout new leaves for them to be able to start blossoming, and that's that.

But our new tenant, since he is young and perhaps more aggressive than his ailing father was, decided to take matters into his own hands and harvested during the prime selling season - prices were high, because many have not yet harvested. However, the mangoes were not appropriately mature. 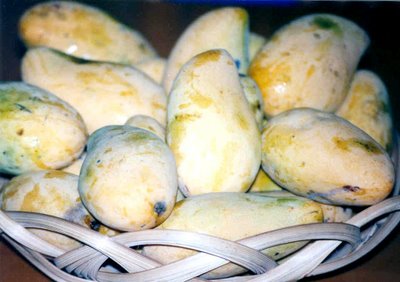 So the green mangoes were as sour as they could be. Who would not be? If I had been been denied proper development, I'm sure I'd be sour about it, too - more than tartly so. And when they ripened, they retained their sourness, the flesh turning a bit gelatinous in consistency and texture.

Actually, I think they skipped the ripening part and proceeded to the rotting stage straight from the state of unripeness. They had black spots even before a week has lapsed from harvest time. 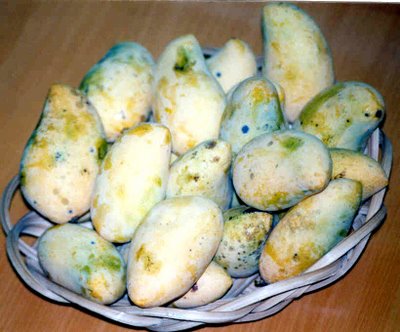 And so this is a late, and may I say, posthumous post. It took the entire summer for me to bemoan and process this tragedy.

I managed - I tried to be resourceful by finding ways to enjoy less than premium mangoes, which resulted in dishes like mango sago, mango adobo, green mango shake.
I have also resorted to buying ripe mangoes for my kids, an unthinkable act in the past during mango season. I so feel the shortchanged sentiment the buyers of our mangoes must have felt, especially since it is of the kalabaw (carabao) variety, which is mostly exported. I have never felt this shame about our mangoes ever.

kai, kalungkot naman 'tong post na 'to. i feel as bad as those mangoes look. maybe next year the younger generation will have learned his lesson and do things differently?

i agree with stef...
mangoes mangoes...if only i can bring them here! haay...sarap!

Philippines has the best source of mangoes, Champagne variety and I guess I have always been missing this one of a kind fruit, be it ripe or unripe, it is the best.

it's been a while since I tasted a sweet mango similar to that. Looks delish!

Noemi, that just about sums a description of a mango, and I'm sure all Filipinos would agree.

Stef and Ces, I sure hope so, and if there's anything I can do about it this year will never happen again!

Chef KC, is champagne variety the term for the local kalabaw?

Hi, I live in the US and I have a question about champagne mangoes. Sometimes the ones we buy at the store develop a black spot and turn black inside. Or the flesh becomes streaked with dark streaks. Or there are woody fibers in the flesh. Are these still OK to eat? What is wrong with them? Thank you.

YES! This is the way to appreciate mangoes! I haven't eaten good mangoes since I moved to the USA. I just won't buy them in the New York area, shipped wastefully thousands of miles and not a hint of smell.

i'm sorry about ur bad mangoes this year, i came up with a great recipe with mangoes too, although i don't have any amount of what kind of ingredients.
ripe mangoes, cooking oil, brown sugar, soy sauce, a little bit of mustard to hold it together, ginger, fresh peppers, all blended up together in a blender, then marinate a steak in it overnight. it's amazing.

I'm in Toronto, Canada. I have had the good fortune to have had wonderful tree-ripened organic mangoes in the past, so I know what the perfect, ripe, juicy, sweet fruit should be like. Awesome! Now our imported mangoes only look ripe, but the flesh is streaked with dark filaments, and they are beginning to rot without getting sweet. What a terrible thing, to harvest these wonderful fruits before they can come true!!