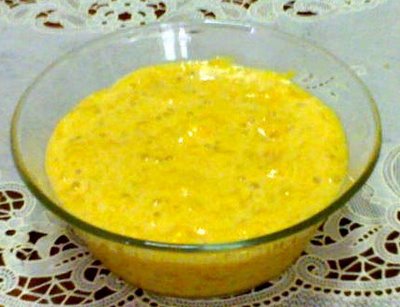 I try to live by the self-imposed policy of eating and cooking what's in season. As a corollary to this, I also try to consume, as much as possible, what's endemic in the area, even though trade liberalization has made it possible for temperate fruits and vegetables to reach our tropical shores. Or that, scientific breakthroughs have made summer fruits to be available year-round.
The suspect manipulation of these plants, so they could bear fruit out of season, harvesting before their prime, waxing - who knows what consequences our bodies would suffer from these? Although of course, most "commercial" (considered as having enough market to be cultured for mass production) fruits sold nowadays, even during their season, have been forced by chemical sprays. Is there a way to escape?
Anyway, that was just an apocalyptic introduction to my low-sugar dessert for 2006's first Sugar High Friday, only this time it's Sugar Low Friday #15, hosted by Becks & Posh and everybody seems to be heading towards healthier eating this year.
Mangoes are in season now, peaking at the height of summer in April and May, when the tropical heat would be merciless on mango-gobbling maniacs by inducing itchy freckles at the back of the neck. With that in mind, it is good to eat mango sago now, when the weather is still cool, and start getting one's fill of the fruit so as not to be so greedy when summer comes. I don't care about cornstarch lining my neck by then.
This dessert can be made from mangoes that are past their prime and starting to sport black spots on their skins because you cannot keep up with them ripening even though all you eat is mangoes day and night. Of course, good, ripe, unblemished ones can be used, too, but I personally think the latter are excellent eaten simply, by themselves. So.
To make, just scoop out the flesh from ripe mangoes and put them in a bowl. Then decide how you want your mango sago - silky and smooth, chunky, or with brawn. For a silky dessert, process all the mango flesh until smooth. If chunky, process or mash finely with a fork half of the mangoes and cube into small pieces the other half. If you want the last, just cube everything.
Mix the mangoes with pre-cooked small, white sago, or palm pith pearls. A tip on cooking the sago - drop them when the water is merrily boiling and cover. When the water has been reduced, add tap water, then cover and let boil again. Repeat the same process until you don't see any more white dots. Drain under running water, then put in a pan of tap water until used. If not to be used for days, drain water thoroughly and store in the refrigerator.
Mango and sago together can now be eaten, but evaporated milk can also be added to make the dessert creamier. Sweetened condensed milk and cream are other options, but in keeping with the low sugar theme, which I extend to low-fat, mango, sago and evaporated milk are good enough a trio. The taste becomes heavenly when served cold. It keeps for about five days, as long as it is stored in the refrigerator.
I'm not sure if an un-cooked dessert qualifies for SHF, but whenever I can (which is most of the time), I don't cook fruits because exposing fruits to heat dissolves their vitamins and minerals. There is no need to cook mangoes, anyway. As long as they have ripened fully, they are as sweet as honey, only brighter and sunshinier. There is no need to add sugar, or any sweetener. The sago added to the dessert, besides providing textural contrast, serves as foil to the mangoes' sweetness. And milk goes well with any fruit. I could eat this every day. That is, as long as mangoes are in season.
Tagged with: SHF # 15 + Low Sugar
Posted by Kai at 6:12 PM

gee have not thought of this such sugar low indeed

extra ripe mangoes yes
here in Athens I get to buy the blackish skin for half the price no one buys them so I do...

this could be an entry.. mango shake with greek yoghurt

but I made something very greek!!

I love sago but have never tried it with mango. Sounds delish Karen.

You have me dreaming of the tropics now. How wonderful to be overrun with mangos!