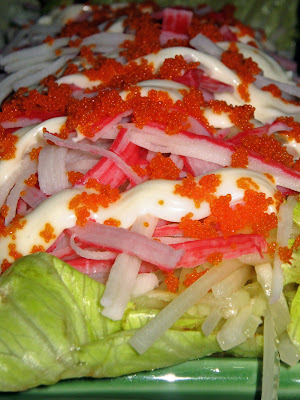 The great thing about celebrating the monthly birth days of a baby is that I get to try out new dishes and plan around menus. The dinners are informal, the guests are mainly adults. Kids are brought along, but the party is mainly for the parents' appreciation, so it's an added bonus that I don't have to cater two parties.

I had been mulling over an East Asian theme for months now, and finally got to execute it last weekend, since my baby's birth day fell on a Saturday (I work Mondays to Fridays, so I can only serve cakes - bought commercially - when the birth day falls on a weekday).

East Asia, or Eastern Asia as the UN prefers it, comprises the political territories of mainland China (including Hong Kong and Macau), the two Koreas, Vietnam, Japan, and Mongolia. This geographical region is actually what was referred to in colonial times as the Far East, which also included Southeast Asia, in which the Philippines is classified, as well as Russia (before consolidating into the USSR).

Why the cuisines from East Asia?

Firstly, there are dishes from this region familiar enough that I couldn't be accused of serving an exotic menu (or difficult or complex, as one guest remarked in a previous party, Is there a special procedure in eating this?). There are popular restaurants in the country specializing in the cuisines of the region, excepting Mongolia.

But despite our exposure to these cuisines, the dishes are worlds removed from what is common and ordinary - by which I mean commonly served during parties, to the point of being considered ordinary - the flavors totally different from fares served in Filipino celebrations.

Secondly, I love East Asian cuisine. It is a joy to be recreating dishes I mainly eat in restaurants and abroad, and introducing these to your friends.

As I said, I had been planning the menu for months - the possibilities are infinite. In the end I decided on easy dishes which are the most familiar and that would complement one another. I'll be delving on the more challenging dishes in the future, when I have more time, and the baby is a bit older.

I started off with a staple of most parties I hosted. Yuri-kani salad - cucumber-crabstick salad - finely sliced cucumbers imitating the thin strips of faux crabstick (crab-flavored surimi, or processed white fish), with mayonnaise (I use Kraft real mayo, which nicely approximates Japanese mayo), generously sprinkled with ebikko (prawn roe), and served on lettuce leaves.

I've been serving this for years the househelp has mastered slicing the cucumbers in the thinnest possible way. And most efficiently, since the cucumbers have to be sliced just before serving, or they become limp and turn the salad soggy.

It's a very refreshing dish, the crabstick's meaty flavor marrying perfectly with the succulent cucumber, bound by the salty-sourness of the mayonnaise, while the ebikko provides crunch and bursts of savory goodness. 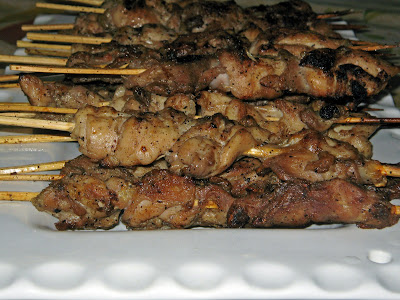 Skewered chicken thigh fillets, brushed with sesame oil, salt and pepper, then grilled. Supposedly shio yakitori, the second dish from Japan, but when removed from the stick and placed between sliced baguettes brushed with mustard, then heaped with the yuri-kani salad, it became the Vietnamese sandwich I went crazy for in Palawan. 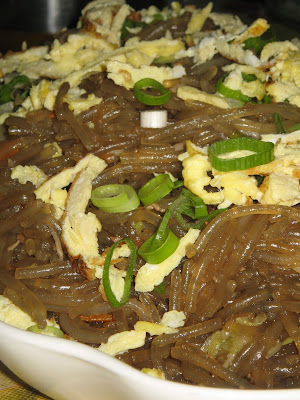 Chap chae, a popular Korean stir-fried noodle dish consisting of potato noodles, or vermicelli (glass noodles made from mung beans, this one almost as thick as spaghetti), in a soy-, sugar- and sesame-flavored sauce, which contained beef strips, wood ear (tengang daga) or black fungus, carrots and bell peppers (I added sliced fresh shiitake and kuchay to make the dish nutty) and sprinkled with scrambled eggs and leeks before serving.

Recipes called for cooking the noodles before tossing with the pre-cooked sauce. I was hesitant about this method, since I have cooked enough pancit to know that noodles are best cooked in the sauce so they would absorb maximum flavor. But I had to follow it, because the vermicelli I bought didn't have one single English word on its plastic packaging. I had also cooked enough canton to know that inexpert measurements of cooking sauce turns unsuspecting noodles pasty and inedible.

The sauce was mildly flavored because I used Kikkoman soy sauce, but the flavor almost vanished when mixed with the noodles, allowing the subtle sesame oil flavor to shine through. In the end I had to reheat and add dashes (glugs, actually) of the common thick soy sauce to ante the palatability. Next time I'll try to be braver and cook the noodles in the sauce, though what I had as the finished product (after the glugs of toyo) was good enough.

I would have wanted to serve siopao, or pork-filled buns, or maybe just steamed buns, even tikoy rolls (filled rice rolls) to represent the Chinese connection, but making these is too time consuming and requires so much involvement. The baby is in a stage when she's become clingy. She welcomes the attention of the nanny, but cries when she sees me around. It was impossible to knead dough with her sticking her stout, stubby fingers in everything she could reach.

So I had to content myself with hot pots of lapsang souchong and green tea to wash everything down. The siopao would have to wait, perhaps for a full Chinese lauriat, or for a Southeast Asian motif.

The mango cake provided a sweet, fruity ending to the meal, and a recap, since mangoes are a common favorite among all the East Asian countries.
Posted by Kai at 6:43 PM

Email ThisBlogThis!Share to TwitterShare to FacebookShare to Pinterest
Labels: from around the world, pancit (noodles), poncia (handaan/party), salad, sira (ulam/viand)

Aargghh! How can I forget! Since you are into the Asian theme, I should have given you the barley tea I found in Korean groceries crowding Burgos street, Makati. Sweetened with honey, my Nanay likes it so much even for breakfast. Happy birthday again my dear Kalad!

I agree with you, food is one way to identity of certain person.