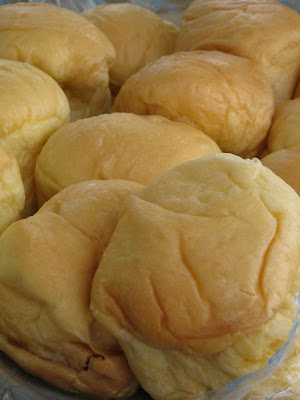 This is part of an ongoing series, "Tinapay," about local breads and cookies in street corner bakeries across the Philippines.

Camíguin, a beautiful volcanic island off the coast of Cagayan De Oro, in Misamis Oriental in Northeastern Mindanao, is known for the sweetest lanzónes (langsat, Lansium domesticum Corr.) ever produced in the country. And so it becomes crowded during lanzónes season, especially in October when the island pays homage to the fruit by way of a festival.
Tourists, though, whether local or foreign, need not fret when travelling to Camiguin off lanzónes season. For, available year-round, is the island's other source of pride - pastél, these soft, buttery dinner roll-like buns filled with divine yéma (caramel custard, dulce de leche). 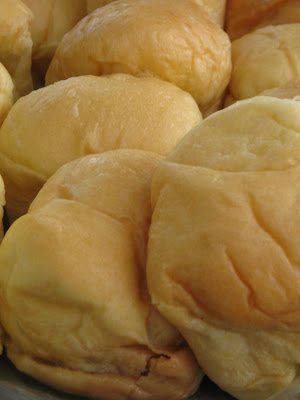 You may have encountered pastél elsewhere, in another form and carrying another name. Camíguin's pastél, though, is something else. Tender crust, crumb moist and flaky and almost approximating a brioche or an ensaymada. And the sweet, viscous yéma fills the bun to bursting, a slight squeeze readily rewarding you with oozing eggy, milky goodness.

With pastél, I can imagine what eating that Ilonggo treat toffee condensada (condensed milk boiled for hours in the can) must be like. But with pastél, sweetness won't be cloying and troubling to your throat. The bun in which it is stuffed makes sure of that.

Pastél got its name from the Spanish term for cake. Prior to the development of tourist infrastructure in Camíguin, it was the traditional delicacy served during fiestas in the island of many springs (hot and cold, take your pick).

And so you had to attend a fiesta in Camíguin to get to know pastél-maker Vjandep (standing for the names of the owners, Virgilio Jose AND Elena Popera, who capitalized on pastél-making with a recipe handed down for generations originated by the Bollozo family). Until several years ago, when Vjandep thought that one small island among the 7,104 during low tide is such a wee, teeny market for the excellent product it churns out.

And so an outlet in Cagayan De Oro City was opened. The pastéls, having been known beforehand with the tourism influx to Camiguin, was well received. Cagayan De Oro being a center of sorts in the region, pastél was included as a must-buy and pasalubong from the city of gold.

Several years passed between my trips to Camiguin and Cagayan De Oro, but I never forgot about the pastél. Attending the wedding of a brother in CDO last year, I had to hunt down that outlet, near Divi. To my delight, the pastél custard now comes in about a dozen flavors (cheese, langka, durian, strawberry, among others). But of course, nothing beats the original from which it built its name.

Pastél was one of many regional delicacies featured in the Filipino fiesta event of the Gaisano Metro supermarket at the Market!Market! mall in Fort Bonifacio late last year. It was well-received and gained enough fans that, lucky for Metro Manilans, pastél has now made many city folks happy since it started selling in a kiosk in the mall since November.

Most of the flavor variants are available in the Market!Market! kiosk, but the bulk is still in the original flavor. Pastél is sold by the piece, or in half-dozen or one dozen boxes. Now there is no more reason to deprive yourself of pastél.

Thanks for the info, Kai.

Nice to know its already available at Market! Market! The first bite I had was a pasalubong from an officemate who visited CDO. I thought it was a CDO original. Thanks for letting me know its actually from Camiguin.

wow, i've never heard of this, kai! the only pastel i'm familiar with is the one similar to chicken pot pie. thank you for your very thorough description. i'll add this to the list of things we'll experiment on when aisa starts her baking blog.

its goes well with coffee... that i found out just this morning. 'bought 2 boxes to send home at market! market! less a few pieces for myself. nice way to start the day!

Yo, that's a sweet way to start the day, literally speaking, hehe..

kalad, from my latest sojourn in siargao, on our flight back to manila, an officemate from butuan introduced me to this wonderful potato biscuit aptly named simyun's patatas special from mangagoy, bislig, surigao del sur as pabitbit. Sarap! it helped tide us over for lunch when our plane cebu pacific was stranded at clark. its like layers of pastries baked to perfection. ill figure out how we can procure this biscuit again. please feature in your blog.

Kalad, please bring me local breads and biscuits from your sojourns across the Philippines. It's sad that I won't be able to join you for the next year or so. So please be my taster, and do feel free to write about your food trips and I'll be honored to feature you.