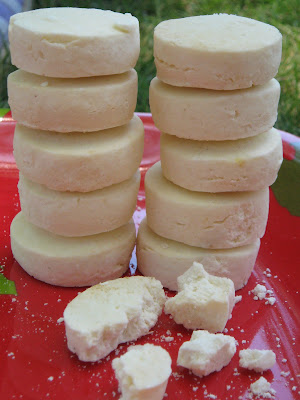 This is part of an ongoing series, "Tinapay," about local breads and cookies found in street corner bakeries across the Philippines.


I've been bringing my son on my weekly forays in the market, principally so he can watch over what I've bought gathered in a corner while I purchase other things. But there are related benefits to it, I tell him, which includes developing his arm muscles if he carries the fruits and fish. And he gets to meet what he eats in their original state.

But of course as a child he knows about the power of his index finger. It's instinctive, I think, from birth. He doesn't brag about it at home, thankfully, but he understands that I am wont to buy him anything he asks for carrying a pail of fish.

I am just glad that he asks only for little things, that most times I buy him more, and more to bring home to his sisters. And I am gladder that he is getting to discover local treats and goods, as can only be found in a provincial public market.

Puto seko is his own market discovery, which, fortunately, is a re-discovery for me. And it became the current craze in our household.

I hated puto seko as a child. It crumbled. It coated my hands and mouth and lap with a fine powder. But the most loathsome thing was that it was achingly, parchingly dry.  When I put it in my mouth it instantly coated my tongue and throat like a fine, dry dust. I needed at least two glasses of water to help me swallow a single piece of puto seko. It was like eating my public elementary school teachers' chalk, and recalled for me the times when I was tasked to write lessons on three panels of blackboard for my classmates to copy.

So understandably I never introduced the cookie to my kids. I never knew what attracted my son to puto seko, perhaps somebody - a relative, or someone in school - gave him some to try, but it was what he asked for one market day while perusing a stall bursting to the seams with treats like a child's dreamland. He didn't know the name,  but he pointed to it with the confident conviction that it was what he wanted.


My first impulse is always to discourage, thinking nobody would miss anything, it's not healthy, anyway, it's surely unsanitary, blah, blah, blah. But I always backtrack, and buy for the sake of experience. And mainly to expose my kids to as much of their cultural heritage, as a Filipino with an amalgamation of countless cultural groups, as possible.

This kind of puto seko (also spelled puto seco) spotted in the Cavite public market came from Nagcarlan, Laguna. I also see packets of the same dozen, small but thick discs from Binan and Calamba, also in Laguna. My son also bought similar packets at our homewtown public market in Pangasinan, but at double the price.

I mentioned it was a re-discovery for me. The puto seko of my childhood were free-formed into little fat flatish balls, or cut into squares and rectangles. My children's puto seko look like they had been shaped into thin logs and refrigerated prior to being sliced thickly.

The big difference, though, is the ease with which these present-day puto seko could be swallowed. They don't parch. They still have the characteristic dry, unyielding feel, but they are not as chalky. And they are a bit sweeter. And more solid - harder, actually. Still crumbly, but not to a fine powder.

At Php5.00 for a dozen immaculate white cookies, it beats any other snack. Of course the cookies are tiny and a kid can finish an entire pack in a single gulp. But it's artisanal, local, and a solid representation of provincial culture. Nothing can beat that.

Recipes I have come across list down cornstarch, eggs, butter and sugar as main ingredients, with some having flour taking a portion of the cornstarch. I'm not sure if these are right recipes, because most puto sekos I've tried have a distinct coconut taste. In fact, I always get a minute bit of stray grated coconut meat in the crumb.

I can't confirm the recipe for now, because I am giving my oven a wide berth  in this hot weather. In the meantime, I let my kids have their fill of market puto seko, and anticipate new discoveries.

Hello Kai, you are a wise mother for taking your son to learn where food comes from. I lived in Laguna in the 70's and enjoyed their delicacies and spirits, I think the flour they use with puto seco is the same one they use with their uraro cookies-arrowroot flour. They grow a lot of it in that part of Laguna-Liliw, Nagcarlan.

i've heard the term puto seko often before but i'm not sure i've ever tasted this. at least now i know what it is. thanks.

Flipster, I think I'll be wiser to bring the kids to where plants actually grow, and where puto seko is made! I'm not sure if they're one and the same, but uraro does have the same distinct unyielding mouthfeel.

Hi Lou, may I send you some?