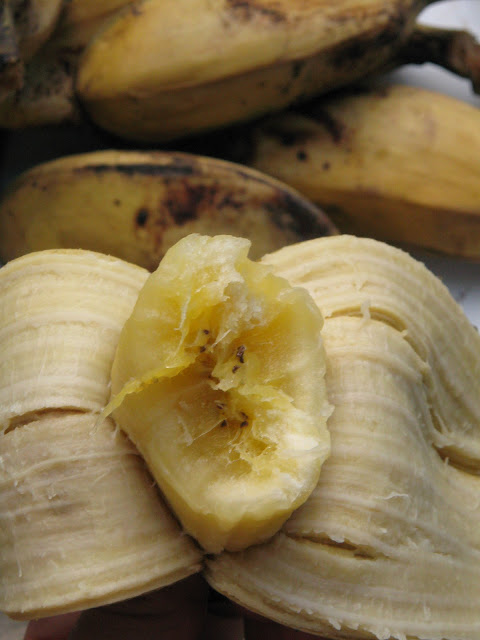 The heat is so oppressive it weighs down on everything like a thick flannel blanket. The air itself sears. The airconditioner takes hours to get its groove, and when it does it becomes useless because then you can't get out of the cooled room, and the heated air outside scalds the skin.

On weekends when I am home the whole day it becomes impossible to get out of bed. I'd rather suffer the heat asleep, waking up feeling like I just spent hours in a sauna room. When the husband is home I have to get up for meals, and I am confronted by the kids dripping wet from seeking solace in the new backyard pool. I join them later, in the evenings, when the sun has gone and the air becomes tepid.

So when I got up one afternoon to find a platter of smoking-hot seba, saba, that had just been boiled, I rallied to gather the remnants of my dissipating energy - hoping to channel it into anger at the stupidity of having smoking bananas on a torrid afternoon.

But the fevered air combusted the fire I had hoped to muster, leaving me spent and suddenly aware of the emptiness in my stomach. I had to sit down. And gingerly peeled a piece of seba. And a rush of deafening air echoed in my brain, realizing I had been seeking this and had not known it.

It was the best boiled banana I've had in years. Sweet through and through, in spite of that thick outer rim of seemingly hard, white flesh. Unbelievably makul-kulnet, maligat, almost sticky but still firm. It was so wonderful I had to savor every bite, chewing slowly and with childish cherish. I never expected I'd get to eat a boiled banana this good ever again.

I thought many factors had to conspire to get a banana taste this good - matured on the stalk, ripened just right, boiled in an exact manner - uncovered? at what temperature? how many minutes?

But I was told the major factor was that this banana was native. Ah, the "it" word these days. Native balatong, native garlic, native ginger. I am not sure anymore what it means. It may be heirloom, but it may also mean endemic, or indigenous. Or probably pure and unmodified.

Whatever it is, I find that any native variety is becoming harder to find. When I do find something, it amazes me to discover it costs the same as the un-native one. It amazes me because I can't understand why the inferior kind is being sold - and getting sold - when the better one is not any more expensive. Perhaps native is more difficult to produce, is not as hardy, is more prone to blights.

Whatever it is, something cold seeped into my being that one blazing afternoon and settled into the darkness of my core. The cold arose from fear, that I might not see and taste the likes of this banana again.

yours is a truly enjoyable style of writing. it gets me hooked right at the first sentence, and a feeling of satisfaction at the conclusion that i have just read a well thought out piece of work by a gifted writer, and learned many things new about my own culture. this is especially true about items like saba which is often overlooked because of its ubiquity.

Thanks, Lou, for the affirmation. Sometimes it feels like I'm making mountains out of molehills, hehehe ;-)

Boiled saba will forever remind me of the first toll gate in Kenon Road in Baguio. Vendors used to sell boiled saba bananas there, just as you described them - makunat and sweet :)

They still sell boiled saba by the toll gate of Kenon Road, Grace, though not year-round. Sometimes there's boiled peanuts, or paho mangoes.