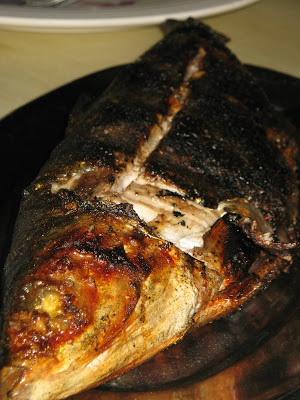 I am a beach bum. I grew up to be one. My kids are growing up to be beach bums. Pangasinenses are raised to become beach-bums.

Gifted with an extensive coastline that wraps the northern, northwestern and western portions of the province, Pangasinan is beach country. So Pangasinenses' all-time favorite pastime is going to the beach. Entire barangays, school classes, clans, barkadas arrive at the beaches by the truckload, or by the busload or jeepload, or trikeload, or even by a kuliglig, to spend the day immersed in the salty waters.

It is the coolest thing to do in Pangasinan, literally and figuratively speaking, even for teenagers. Even for those on a date. I’ve even spent nights at the beach with some of my high school and college barkada, singing to the strums on a guitar by a bonfire, sometimes spending the night at the many nipa cottages lining the shores of Lingayen Gulf.

Beach-bumming is a beloved local activity that's done year-round, whatever the season. Because the beaches are mostly defined by the Lingayen Gulf, waters are calm and generally warm even during the cold season. Even in stormy weather, which Pangasinan gets a lot of and usually in an elevated level of fierceness because the region is normally the exit point for tropical storms, it is not uncommon for people to be hitting the beach.

Storms, and full moons, actually provide more excitement and variety, what with higher and more forceful waves to crash into and a stronger undertow that doubles the fun.

Not everybody who goes to the beach likes being brined, though. Those who mind a suntan, lounging in the nipa cottages to drink and sing karaoke, and of course to breathe in the sea breeze and relax, is a worthwhile way to spend the day.

It is common practice among beach-bummers to bring baon – packed meals cooked at dawn – to the beach. Nothing too fancy or it might spoil – usually pancit (sautéed stick noodles), adobo (meats stewed in vinegar and soy sauce), and prepared barbecues ready for grilling.

Sometimes, if the markets along the way have good seafood early in the morning, fresh fish, squid, shrimps would be purchased for grilling at the beach. But even if food planning is haphazard, nobody at the beach goes hungry, as ambulant seafood vendors make rounds carrying crabs and shrimps and squid and pinindar a bangus (butterflied and sun-dried milkfish), while charcoal for grilling is sold everywhere. 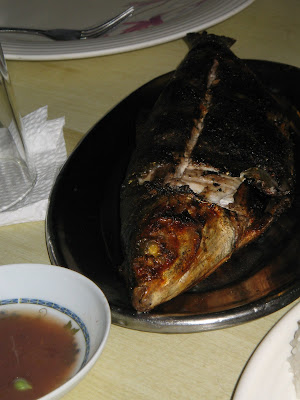 Those who rent out the beach cottages at the beaches in Bonuan and San Fabian, where we frequently go to beach-bum, can grill Bonuan bangus perfectly (scales charred but the flesh, and especially the fat, still moist) for a fee. This is served accompanied by the default dipping sauce of inasin, commonly known elsewhere as bagoong isda, squeezed with kalamansi juice and spiked with sili (chile peppers) left whole for the diner to mash according to his heat preference.

Inkalot a bangus is eaten with rice and kamatis tan agamang (fresh tomatoes, preferably native, and salted fermented krill or bagoong alamang), and likely with freshly gathered ar-arosip (sea grapes) on the side. It is also good with beer, particularly with thinly pared green mangoes dipped lightly in the same dipping sauce, or gin, even brandy or rum.

However one likes it, it is a very economical way to get high on something that is abundant in the province. That's why it is much loved. Like the beaches. And beach-bumming.

I am not a fish eater. I can barely tolerate water packed can tuna. So I just pass it by. Roz

Oh yeah, by the trikeload, I forgot about that. Not even seven or eight, but even up to 15 people fit in a tricycle! Four more at the top and three at the back, hahaha!

Already drooling with the last picture, just add sili by the calamansi seed and picture perfect..Yummy...Now, can't wait for our next trip to the Chinese store to buy bagoong and bangus..

Jane, good for you that you can buy bangus and bagoong at your local Chinese store!