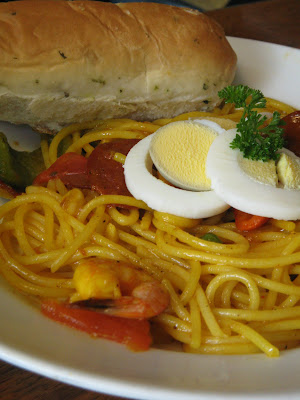 Paella Pasta
From one mountain getaway to another, we go to the country's summer destination, equally, if not more, popular than its Southern Tagalog counterpart even though it is way up in the northwestern portion of Luzon and a good six hours away by land (air trips have been cancelled years before). But it's quite summer there, last I heard, the temperature hovering around 30 degrees, the normal year-round level in Metro Manila.

I got acquainted with Vizco’s via that fantastic strawberry cake which we had during a picnic by the Burnham Park lagoon in Baguio City more than a year ago. We crossed paths two more times, as the restaurant catered the reunion lunches of my husband’s class for two consecutive years.

Our first catered lunch was so memorable with some penne in a magnificent tomato sauce, an excellent roasted chicken, and the best cream puff I’ve ever eaten. Unfortunately, the next function catered by Vizco’s that I attended overturned that outstanding first impression of a meal. It was a study in what could go wrong in cooking for a large crowd. The roast pork, though very tasty, would have been great if it had been melt-in-the-mouth soft, but the fat layer was still as solid as a pale sapin-sapin. The chicken barbecue was undercooked, as well, and the crispy noodles was just satisfactory. Not even the buko-pandan salad was good enough.

It was only recently that I got to eat in the restaurant itself, a small affair along Session Road with only about six tables or so, beside the original Don Henrico’s. I still tried the restaurant reasoning out that maybe the restaurant experience would approximate that first catered meal. I like to eat at local food shops, upturning my nose over SM's offerings. But sometimes I like to snob my favorite Baguio restaurants, in search of something new.

Well, I was wrong, and I was disappointed. First thing, that excellent roasted chicken and the cream puffs are not sold in the restaurant. Our order for lunch for a small family consisted of a mix of good (one), forgettable (some) and downright forget-about-it dishes. A friend went there after me, and reported back an unsatisfactory experience, and that even the strawberry cake fell short of expectation (“dry”).

Oh well, time to sample other Baguio restaurants. Or maybe just stick to the fresh vegetables at the market and cook. 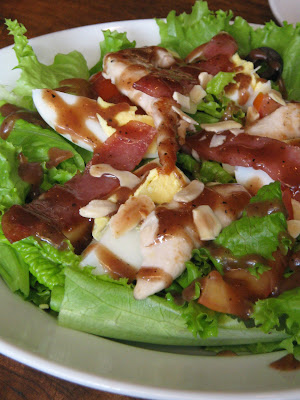 This salad could have used a little more imagination. Just a bed of lettuce, some sliced boiled eggs, strips of sweet ham, tomato wedges, with barbecue sauce. It’s the house salad. Nothing to tickle the senses with. Just give me caesar. 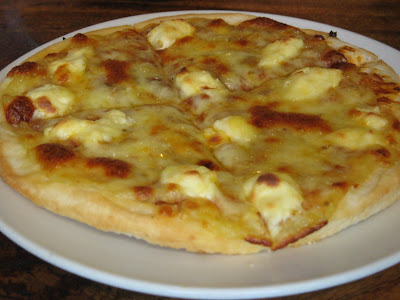 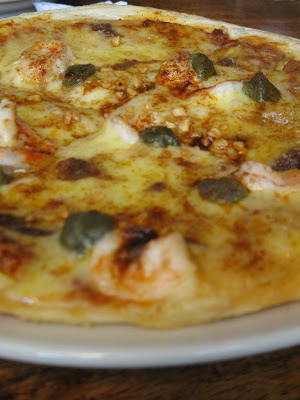 About the pastas, the house specialty and supposedly bestseller, paella pasta (topmost photo), was very greasy and didn’t really taste like paella. More like spaghetti coated with orange-dyed vegetable oil. 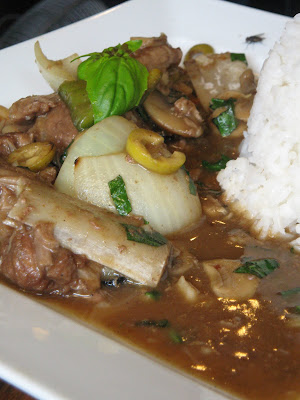 This beef stew was above average delicious. If only for this, I’m willing to eat again at Vizco’s. That fly probably thinks so, too. 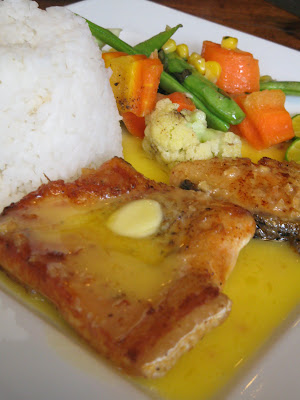 The salmon was okay, but I think that lemon-butter sauce it is swimming in is totally unnecessary. 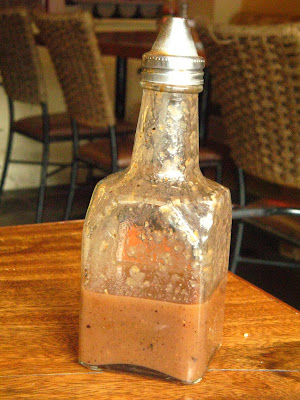 Now this hot sauce was something else. It was fiery but full of body, so delicious by itself that the husband drenched everything with it, and we even bought a bottle to take home (Php150).

So if I’m back at Vizco’s it would be to buy another bottle, and maybe for the Italian beef stew. And for the strawberry cake, the baking of which I hope the pastry chef monitors so the quality is consistent. And maybe with the hope that they serve that chicken and that cream puff.
For a different dining experience at Vizco's, read another blogger's review here.

My Favorite Baguio Restaurants
Rose Bowl
Cafe by the Ruins

Email ThisBlogThis!Share to TwitterShare to FacebookShare to Pinterest
Labels: out of town, restaurants

Kai,
I feel your disappointment. I was there last month and I don’t know if it is the economy that the restaurant tries to save on their ingredients or save on the salary of their chef.
I noticed on some restaurant that I used to eat changed tremendously on negative side. Food were no longer taste the same. There were restaurant that they have a book list of menu but when you order a lot of them are not available. One example of that is the
Isda-Isadaan in Gerona, Tarlac (It is an ideal stopover from Manila to Pangasinan) a lot of their food on the menu are not available and they try to recommend either lechon kawali, crispy pata which were abundant.
I found a good restaurant in our place that is a good place when I went home in Lingayen.
The old former Bangsal Restaurant and now it is called Enzo. Food was good and as well ass their pastries. Big crowd for celebration? Go for it in their banquet hall. Food was great and generous. Staffs were friendly and courteous and most of all, the place is clean.

Manong Bert! It seems you've indulged in a food trip going back home! I'm sorry so many restaurants disappointed you. But about Enzo's, Bangsal had this great reputation and was considered an institution because of its staying power. So now it's non-existent, good thing you were impressed with what replaced it, I'd like to try it sometime. Dagupan is now overrun with Metro Manila restos, did you notice?

About Isdaan, I never was attracted to the place even though it is indeed a good stop-over half-way to Pangasinan. How funny they recommend pork dishes when the restaurant name brandishes fish.

Hi Kai.... You gave me an idea. I'll try Spaghetti paella but with real saffron and not orange-coated oil. Spaghetti is very flexible, I've seen and tried Spaghetti barbeque, Kung pau Spaghetti, Spaghetti pizza, among others.

Ooohh we have opposite reviews for this joint. Several factors are different though, different dishes ordered and different conditions prior to eating in Vizco's. Anyway, when I get the chance to go back to Baguio, I'll get what you ordered. NIce review. Please do visit my blogsite too - http://pinoywordofmouth.blogspot.com

Freeman,
Great that you had a different experience eating at Vizco's. They must be doing something good there, seeing as they've been in the business for more than five years now. I just have to look deeper, I guess. Maybe if I go back there I'll try what you ordered, thanks.

The beef in wine is ok but the pasta paella is horrid. Too bad we didn't listen to your admonitions and ordered the paella pasta anyway. The strawberry cake was also dry. The time we ate there, the owner was being prepped for a a magazine article. Now that vizco's is going national, maybe the owner should consider maintaining quality,